Taking off from NASA’s Dryden Aircraft Operations Facility in Palmdale, Calif., we flew a second flight over the region for what we call our ‘shakedown’ mission.

This time, we flew targets in reverse direction to ensure that we had quality data over the open ocean. Our pilot flew southwest over the ocean until he found breaks in the morning marine layer, typical off of the coast of California. Once MABEL was back over land, the pilot reported that the weather was completely clear for the rest of the mission, which extended as far east as Lake Mead.

For this flight, we are testing some of MABEL’s unique capabilities, such as her variable field of view. This ‘shakedown’ mission is allowing us to assess that capability. 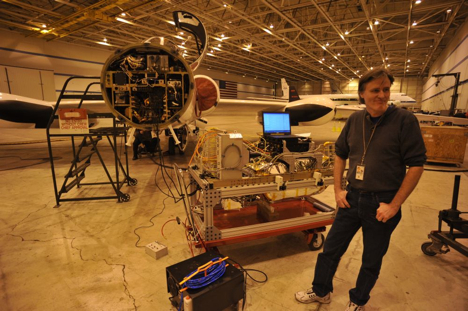 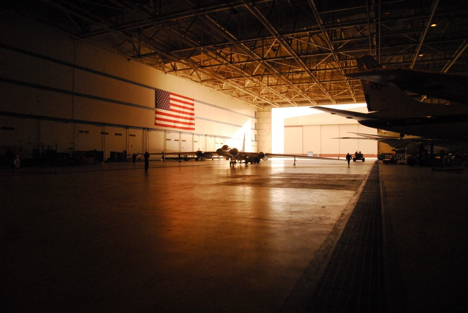 MABEL flies aboard NASA’s ER-2, which is a research version of the Air Force’s U2 reconnaissance aircraft. MABEL specifically flies in the nose cone of the ER-2.

The ER-2 is special because it flies at a very high altitude. MABEL’s data is collected at approximately 65,000 feet above sea level, putting the instrument above much of the dense part of the atmosphere.

The ER-2 has 2 wheels, one behind the other, both running down the center of the aircraft (photos below). It takes off and lands with the assistance of ‘pogos’ on the ends of each wing. Pogos are temporary wheels that fall off immediately after take-off. When the plane lands, and slowly comes to a full stop, it generally tilts to one side or the other and rests on skids that are on the tip of each of the wings. Then the ground crew has to be manually reattached the pogos. 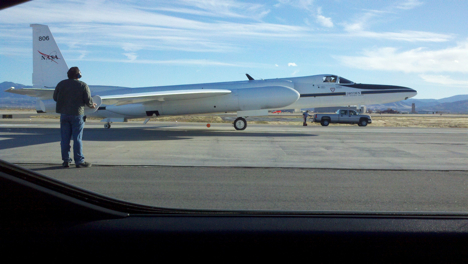 Flying at 65,000 feet above sea level, the pilots are in pressurized suits, much like astronauts. So the process of getting the pilot into the aircraft and off the ground takes longer than it would for other aircraft. The pilot actually comes to the aircraft in a life-support vehicle and carries with him a unit that helps bring him oxygen and keep him cool prior to takeoff (photos below). 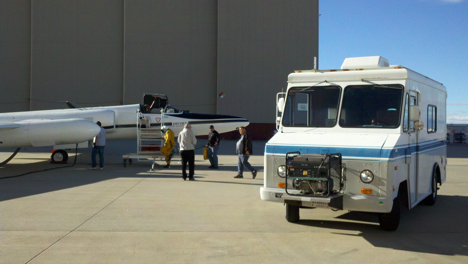 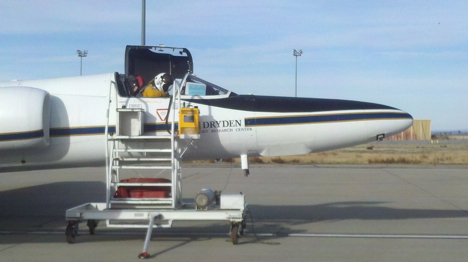 More later about the ER-2 …

After just a day of hooking MABEL up to the aircraft and checking out her systems (image below), we flew the instrument on what we consider to be a ‘shakedown’ mission. We flew a route local to the Dryden Flight Research Center that is also used by Operation IceBridge. It allows us to ensure that MABEL, and a secondary instrument onboard the aircraft, are operating smoothly. This flight path also covers a lot of different types of terrain, such as Lake Meade, the Pacific Ocean, mountains, and deserts. These varying terrains allow us to assess MABEL’s performance. Additionally, because we are flying an established route for IceBridge, we have data with which to compare MABEL. 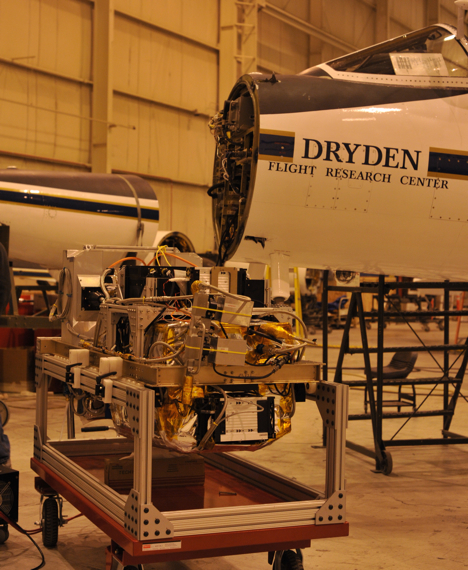 Prior to each flight, we have a weather briefing with the pilots. That happens 3 hours before the flight. So at 6:00 AM, two members of our team stumbled into the hanger to assess the weather with the pilots.

Then, around 9:00, the aircraft took off (image below). It turns out, most of the route was pretty nice … except for over the ocean, which is what we really needed, as that was missed during the December mission. 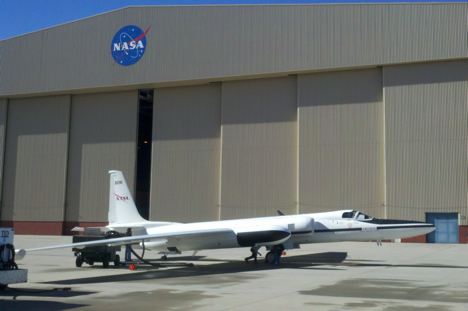 We’ll have to get ocean data on the next flight.

Tomorrow, I’ll write a bit about the aircraft associated with MABEL …

A Return to Dryden!

Our Goddard-based team is at Dryden Flight Research Center testing an instrument named MABEL, which stands for “Multiple Altimeter Beam Experimental Lidar”. MABEL is an ICESat-2 simulator, which we fly the instrument at high altitudes over various terrain to test the satellite’s measurement concept.

We were out here last December for MABEL’s maiden voyage. For the December deployment, we flew 5 test flights that included targets that would tell us about MABEL’s capabilities, such as ocean water, lake water, snow, salt flats, mountains, vegetated regions, and places where we had other datasets for ground control. I’ve attached a photo of MABEL before she entered the nose cone of the ER-2 (below). 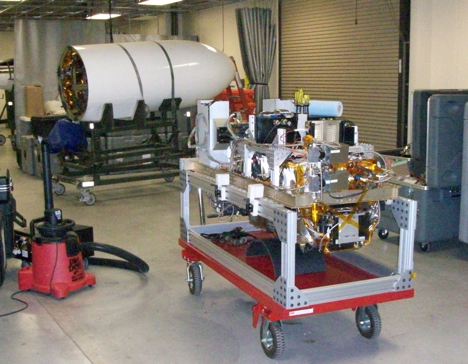 We’ve returned to Palmdale to fly MABEL again to test a new set of filters that have been added to the instrument to filter out background noise, stemming from natural sunlight. These ‘etalon’ filters are a critical component to MABEL’s design, allowing us to fly during daylight hours.

So instead of being in the aircraft hanger until the middle of the night (like we were in December), we now have to arrive to the hanger super early … This ‘morning,’ two of us were awake between 3 a.m. and 3:30 a.m. In order to finish out this day, I have now had approximately eight cups of coffee today. I’ll write about our first flight tomorrow. Stay tuned …

About the blogger:
While at NASA, Kelly Brunt has been working on ICESat-2, where her duties include flight planning for Multiple Altimeter Beam Experimental Lidar (MABEL). MABEL is a high-altitude, airborne instrument intended to assess the new lidar concept associated with ICESat-2. Read more about Kelly here.