All of the GloPac instrument teams have now arrived at Dryden Flight Research Center, and our  integration of instruments onto the Global Hawk UAS continues.  We’re putting 10  instruments on the plane, and each team has 2 to 3 scientists working on their instrument.

This means we have a lot of  scientists bunched around the airplane. The instrument teams are all  located alongside the Global Hawk in the hangar.  It’s a very spacious  hangar and the lab tables are great (internet connected, and plenty of  power), but it is loud and cold when the hangar door is opened.

Usually it’s just the Global Hawk crew in the hangar, so this group of
25 scientists camped around lab tables has the appearance of a gypsy
camp.  Instruments, tools, computers, bicycles, food, and clothes are
piled into the instrument area.  I’ll  bet the crew wouldn’t be surprised if someone pulled out a mandolin  and started playing. 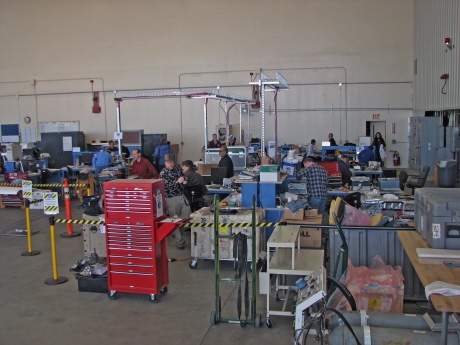 After working in this area for a few days, the “cubicle farm offices” back home will begin to look palatial.

A flight day with the Global Hawk flight day starts very early and runs very late.  For a 7 AM takeoff, the plane must be pulled out to a concrete pad adjacent to the runway at about 4 AM. This means the crew must arrive by 3 AM  to get the plane ready.

The lead pilot of the Global Hawk, Dee Porter, led a meeting of the entire team this morning at 5. He reviewed the aircraft status and shared the flight plan.

The plan for today was to takeoff at 7 AM (Pacific) and fly for about 14  hours. The plane would stay in restricted airspace near Edwards Air Force Base, and a series of communications tests would be performed. About halfway through the flight, the entire crew of the Global Hawk Operations Center (GHOC) would be relieved and the plane handed off to a fresh batch of controllers. 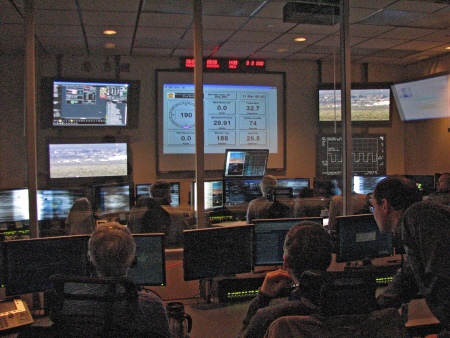 The Global Hawk’s engine was started at about 6 AM, and the plane did indeed take off shortly after 7 AM. As I write this, the plane is cruising over central California at about 60,000 feet. If everything goes well, it  should land at about 9 PM tonight.

Not blowin in the wind

We were planning a test flight of the Global Hawk for Wednesday (March 10), but unfortunately the wind speeds are forecast to be too strong (with gusts greater than 40 mph). You can get a feel for the problem of  high winds by driving your car at 40 mph and then sticking your hand out the window. But why exactly are strong winds a problem for a plane? 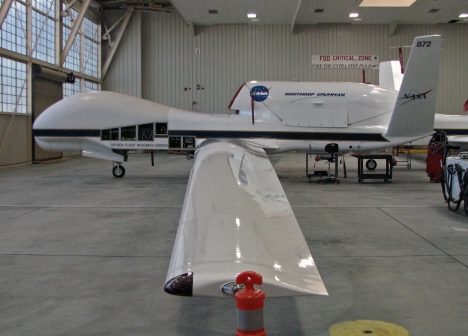 The Global Hawk has a 116- foot wingspan. (For comparison, the Boeing 737-800 commercial airliner  has a 113-foot wingspan).  This long wing allows the Global Hawk to  soar to 65,000 feet.  However, like the booby bird, the  Global Hawk is graceful in the air but awkward on the ground.  With a heavy fuel load in the wings, a strong wind can easily tilt the  wing into the ground and damage the plane. So we’ll play it carefully and wait for another day.

Greetings from the sunny California desert!  After getting up at 4 AM
in Maryland, taking a 6-hour flight to Los Angeles, and then driving two
hours, I arrived at NASA’s Dryden Flight Research Center at Edwards
Air Force Base for the start of the Global Hawk Pacific (GloPac)
mission.  Now you might imagine that the California desert would be
dry and sunny, but no.  At this moment, the flat lakebed is covered in
water and the skies are cloudy (but no rain).

After arriving at DFRC, I cruised into the hangar and found a beehive of activity around the Global Hawk.  Only a couple of the research scientists are here so far; they’re starting to assemble their instruments and install them onto the aircraft mounting plates.  The aircraft crew is pretty busy tracking down a couple of problems with one of the computers that talks between the instruments and the ground.  The crew also fueled the plane today.  If you look carefully at the photo, you can see the wings drooping because of the weight of the fuel inside.

Now I’m on the two most important tasks at the start of a field mission. 1) Find the coffee pot.   2) Find the bathroom.

A remote control plane, but no child’s play

The Global Hawk Pacific (GloPac) mission is the first science use of NASA’s new unmanned aircraft system (UAS). The Global Hawk is a unique robotic plane that can fly for more than 30 hours at a time, soaring as high as 65,000 feet and as far as 11,000 nautical miles (12,659 miles). It can carry up to 1,500 lbs. of instruments.

The GloPac field campaign is scheduled for March and April 2010, flying out of NASA’s Dryden Flight Research Center at the Edwards Air Force Base in southern California’s desert. GloPac will consist of four or five science flights that will take the Global Hawk over the Pacific Ocean and Arctic regions. The plane will carry ten science instruments that will sample the chemical composition of stratospheric and tropospheric air and observe cloud and particle distributions in the troposphere.

Join us for the next six weeks as scientists, engineers, technicians, and the flight team share their experiences from an airborne science expedition where only their instruments go airborne.