Going to the Top of the World to Touch the Sky

Two hundred people; two centuries, in the Roman style. That’s what it takes to launch two rockets from the top of the world. One hundred here and another hundred back home to help with the designing and the building and the testing and the shipping and to take each of the thousand steps between an idea and the reality.

We are sixty-one team members in the field, Norwegians, Canadians, and Americans, technicians, engineers, and scientists. Payload team, instrument team, motor team, launcher team. Telemetry and tracking team, range team, safety team. All working together at the end of the Earth, far from home. 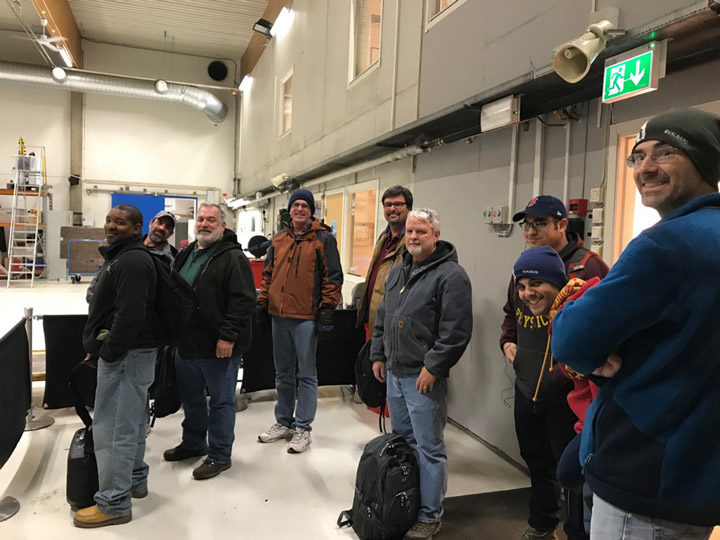 Then there are the Kings Bay staff. Pilot, purchaser, plumber, chef, cooks, and carpenter, harbormaster, mechanic, electrician, and the rest of the twenty-three souls that live here in Ny-Ålesund, keeping this community running through the long polar night. Rounding out our first century are the other workers and researchers at the Polar Institute, here in scientific communion.

In our second century are the team members we left at home. The machinists who turn solid aluminum into sleek and elegant instruments, each unique, purpose-built. The designers and technicians who imagined and then built each of the myriads of circuits and pulled the miles of electrical wiring. The administrative staff who make sure the bills get paid, the travel arrangements run smoothly, and emergencies are handled quickly and efficiently. For three years this team has worked so that the field team could spend weeks in the high Arctic, preparing our rockets and experiments.

We have journeyed to Ny-Ålesund, Svalbard, the northernmost town in the world, so that we can touch the sky. 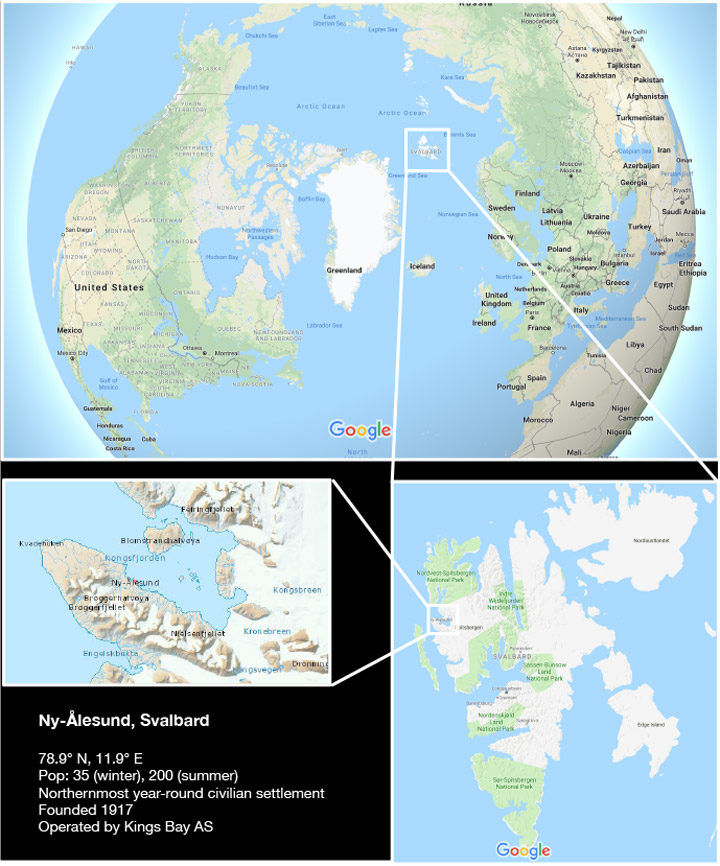 Ny Ålesund is the northernmost year-round civilian settlement in the world. On the shores of the Kongsfjord (King’s Bay), it benefits from the warm waters of the Gulf Stream, which provides an ice-free harbor year-round. Once an important home of coal mining, it has changed focus to scientific research. At 78.9° N, the town is only 1237 km from the North Pole, and over 5700 km from Washington, DC. 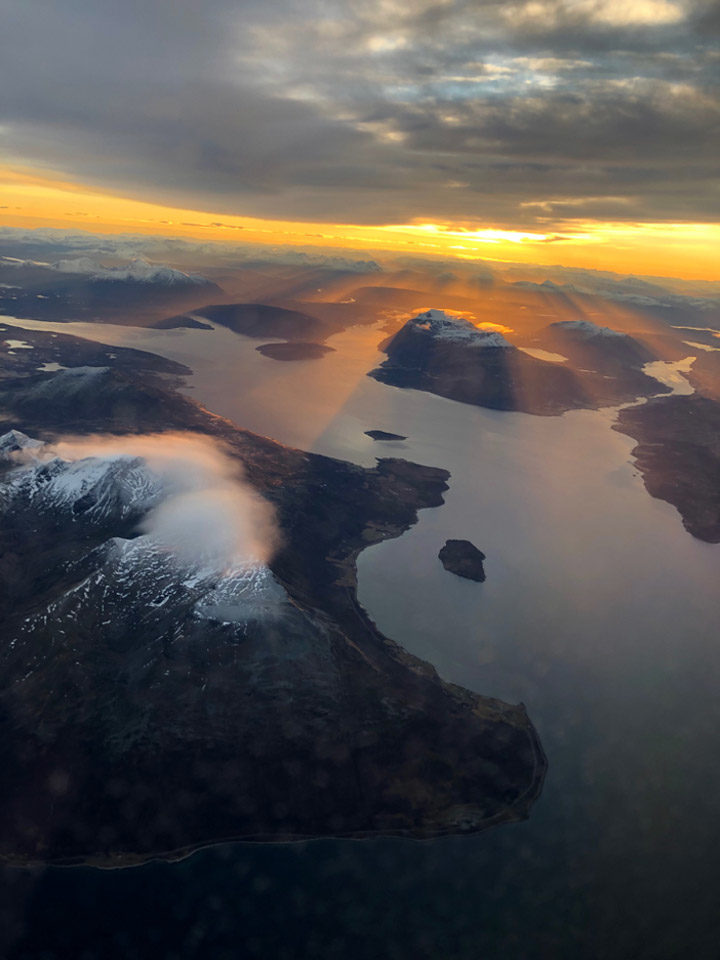 The last sunset I saw as I flew north from Oslo to Longyearbyen, Svalbard. This photo was taken near Tromsø, out the window of the airplane. Our team will not see the Sun again until they head south after the launch. Credit: Doug Rowland

We are here because this is the one inhabited place on Earth that, every morning, passes directly underneath a weak point in our world’s magnetic bubble, a funnel that channels the fierce solar wind into our upper atmosphere, sparking auroral displays, and boiling the gases of our atmosphere off into the vacuum of space. We are here to learn how this happens, and to take a picture. 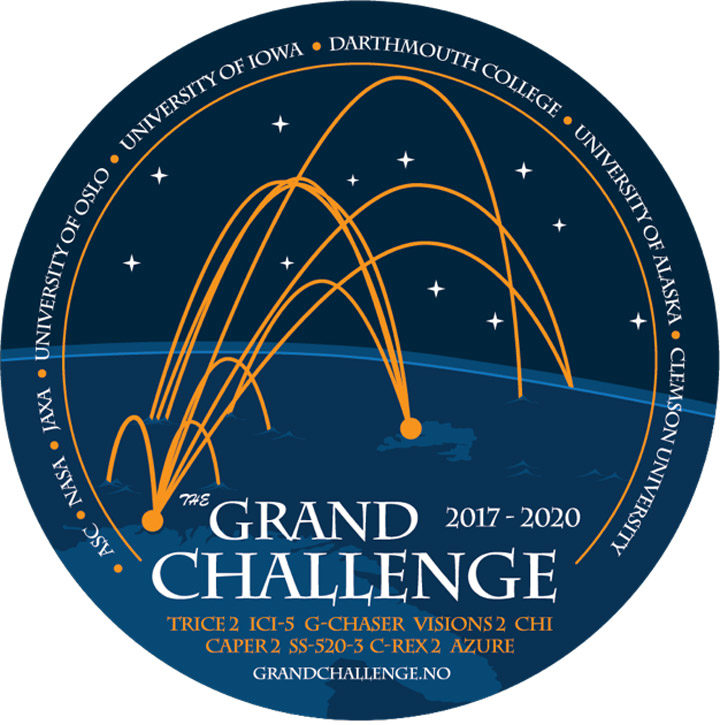 Our mission, VISualizing Ion Outflow via Neutral atom Sensing (VISIONS-2), will launch from Ny-Ålesund, Svalbard, between December 4 – 18, 2018. VISIONS-2 is part of the Grand Challenge Initiative — Cusp, a dedicated sequence of 12 rockets launching over 2 years to study the interaction between the magnetic cusp and the upper atmosphere. The Grand Challenge is a multinational cooperative agreement between the US, Norway, and Japan that provides for open data sharing and scientific collaboration. The three nations are leveraging existing infrastructure to optimize scientific return from missions launched by all three countries.

Like the old daguerreotypes, this picture will be primitive. It will be grainy. It will be such a long exposure as to blur the impatient atoms as they champ and strain under Earth’s gravity. But this picture will reveal, in false-color chiaroscuro, the locations and strength of fountains of gas that shoot high out of the atmosphere, driven by the intense electric currents that course through the aurora.

Unlike the daguerreotypes, our picture does not register light striking a silvered plate. Our picture is built up by a glass plate that detects the impacts of very fast atoms, racing past their neighbors like a Formula 1 car overtaking a marathon runner. These atoms undergo their own marathon journey, traveling tens or hundreds of miles from the fountains where they are born. But to see them, we must go to space. This because our planet’s thick atmosphere absorbs any atoms which travel down towards us on the ground, blanketing us in ignorance and shrouding these fountains in mystery. Only a camera lofted above, to altitudes above this shroud, can reveal these atmospheric fountains and their link to the ghostly aurora.

So, we come to this place, the only one on Earth like it, bringing rockets to lift our cameras high. We come here in the long winter night, our way lit by the aurora’s iridescence, and our hearts warmed by the welcome of our Norwegian friends and colleagues. We come here in the spirit of international cooperation and scientific endeavor to learn about our world, and perhaps, about ourselves.

This entry was posted on Wednesday, November 21st, 2018 at 4:24 pm and is filed under VISIONS-2: Imaging Earth’s Portal to Space. You can follow any responses to this entry through the RSS 2.0 feed. Both comments and pings are currently closed.