This Twilight Zone is Dark, Watery, and Full of Intrigue

Daily migration of marine life to and from the twilight zone to the ocean surface.

“There is a 5th dimension beyond that which is known to man.It is the middle ground between light and shadow.It is an area, which we call, the Twilight Zone.” ~Rod Serling

Like many kids growing up in the 1960’s, I eagerly anticipated every episode of a black-and-white TV series by Rod Serling, expecting to be surprised, maybe even a little scared, of the mysteries of that 5th dimension he called “The Twilight Zone.” Little did I know that decades later as an oceanographer, I’d find myself at sea with over 60 like-minded scientists on a program specifically targeting the mysteries of another twilight zone—the one in the ocean that lies just below the sunlit surface. 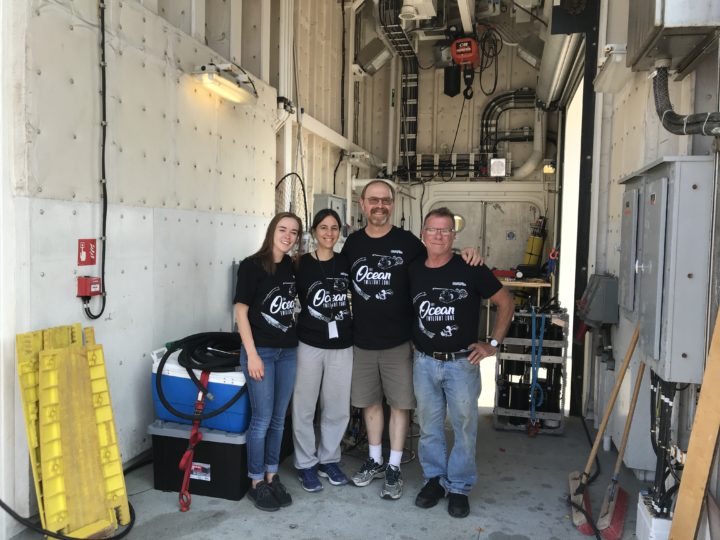 The WHOI EXPORTS team showed off their glow-in-the-dark ocean twilight zone t-shirts prior to departure from Seattle in August. Credit: WHOI/Ken Buesseler

What motivates us is the need to learn more about the role of the twilight zone and the animals that live there in regulating Earth’s climate. The story of how they do this actually starts at the surface, where microscopic marine algae, or phytoplankton, turn carbon dioxide in the water into organic matter via photosynthesis, much like plants on land.

This organic matter forms the base of the marine food web, which basically means that these microscopic plants serve as food for tiny marine animals called zooplankton, which are eaten by larger marine organisms and so on up to larger animals, like the fish that humans consume. Many of these animals come up from the twilight zone at night, using the cover of darkness to feed in surface waters and then disappear come daybreak. This is, in fact, the largest animal migration on Earth and happens around the globe every day, and we barely know it happens. 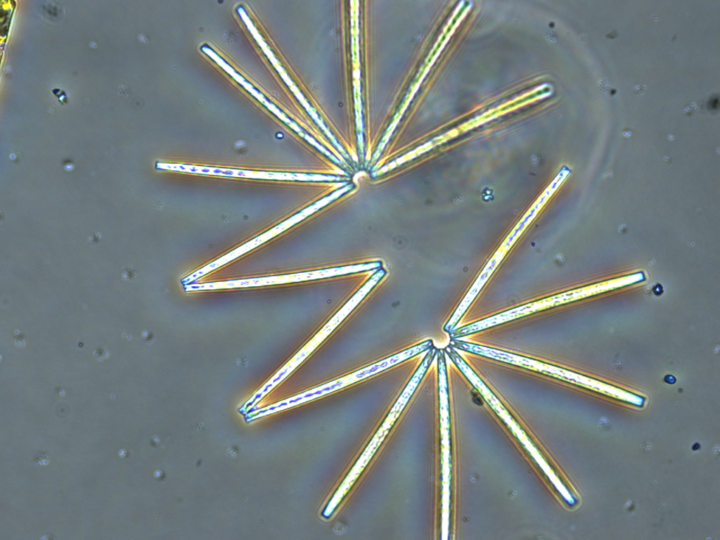 Phytoplankton in the form of a diatom chain. Credit: University of Rhode Island/Stephanie Anderson

But I am getting ahead of myself, because despite how appropriate Rod Serling’s description of the mysteries of “the middle ground between light and shadow” fits with what we are doing out here, peering with our instruments into the dimly lit depths, his TV show is not the origin of the name of a twilight zone in ocean sciences. In fact, at least as far back as 1915, textbooks included discussion of the “decrease in the abundance of life from the sunlit surface layers, through the twilight zone, to the zone of darkness,” as was written in College Physiography.

Getting back to this cruise, most of the carbon either sinks out of the surface ocean directly or is carried by animals back down to the twilight zone in their guts and gets excreted. All of this sinking carbon becomes food for other twilight zone animals, with less and less remaining as you go deeper. This constant rain of organic carbon is known as “marine snow,” which drifts through the twilight zone and into the deep ocean.

Who cares how much organic matter or carbon goes through the twilight zone? Well, if you are an animal living in the twilight zone, that’s your main food supply. As a human concerned with the potential for rising carbon dioxide levels in the atmosphere to disrupt our climate, it’s the quickest way you can get organic carbon to the deep ocean, effectively removing it from contact with the surface ocean and atmosphere for hundreds or thousands of years.

Simply put, without the ocean storing carbon in the deep sea, the levels of carbon dioxide in the atmosphere would be much higher than they are today. And the last time they were this high, Earth was a much different place. 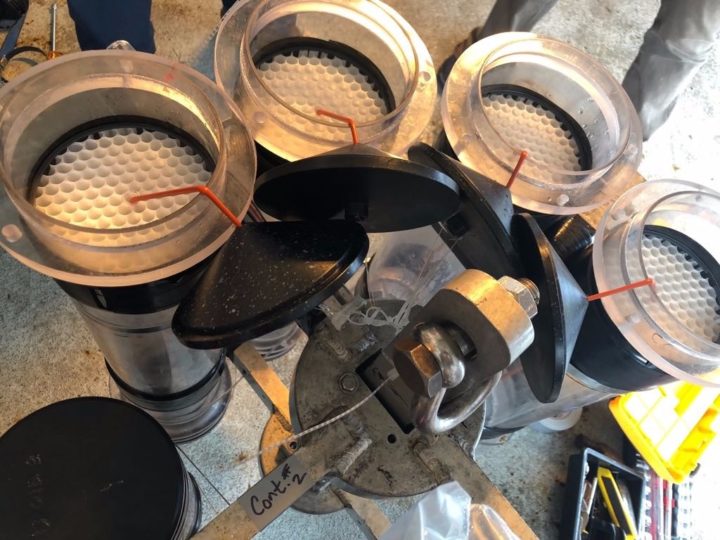 The open top of a neutral-buoyancy sediment trap (NBST) showing the opening through which marine snow drifts and is then collected. Credit: UCSB/David Siegel 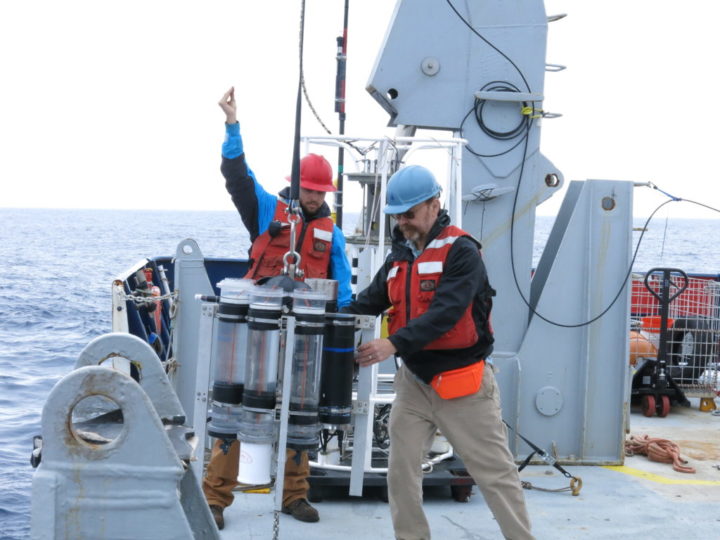 The tools I used to measure this cascade of particles carrying organic carbon to depth on this voyage include sediment traps—something like a rain gauge that captures in a tube the sinking particles that are slowly settling through the water. A second method my group uses to measure sinking particles takes advantage of a naturally occurring element called thorium-234, which is slightly radioactive and decays with a precise 24.1-day half-life. This clock allows me to calculate very precisely how much carbon is being carried from the surface through the twilight zone.

It’s far too early to share my results from this cruise, but the importance and complexity of these links between twilight zone organisms and climate should not be underestimated. Like snowfall on land, organic carbon transport to the depths varies with the seasons and locations in the oceans, but in ways we cannot predict. And it is important for us in our efforts to better understand how quickly climate will change as we keep adding more carbon dioxide to the atmosphere. This job is so complex that it takes a village out here aboard two research ships, with autonomous vehicles in the water and support teams on land and satellites above. We work together to study these carbon flows and the living organisms in the twilight zone that create what marine biologist and conservationist Rachel Carson called the “most stupendous snowfall on earth.”

I don’t know if there are any episodes of The Twilight Zone to watch out here, but I do know there are many deeper mysteries we hope to unravel about the ocean’s twilight zone.

Ken Buesseler is a senior scientist at the Woods Hole Oceanographic Institution. He has been working for decades on the ocean twilight zone and its impact on Earth’s carbon cycle. He is currently on the R/V Roger Revelle as part of the Export Processes in the Ocean from Remote Sensing (EXPORTS) field campaign.

This entry was posted on Monday, August 20th, 2018 at 1:13 pm and is filed under EXPORTS. You can follow any responses to this entry through the RSS 2.0 feed. Both comments and pings are currently closed.

One Response to “This Twilight Zone is Dark, Watery, and Full of Intrigue”