This week while the GLiHT crew continued collecting data over the Susitna and Tanana valleys, we focused on collecting on-the-ground data on spruce beetle infestation. Our first day out proved rainy and cold, but we pressed on, only sheltering in the car during a particularly hard spell. Aside from the occasionally torrential rain, we also dealt with clambering over downed logs nearly invisible under thick grasses and ferns, as well as waist-high patches of Devil’s club. This nasty understory shrub is covered in painful thorns tough enough to penetrate through clothing. We often found ourselves having to backtrack and find a different route to our desired tree after realizing we were wading into a sea of the spiky shrubs. As a testament to this somewhat failed effort, my legs were covered in scratches and bruises later that evening.

A Devil’s club patch to be avoided.

Our task was to find and GPS spruce trees within the collected GLiHT imagery and record their infestation status and size so that they can later be used to develop infestation detection algorithms for aerial and satellite imagery. Spirits were running fairly low until we found a big patch of both green-stage infested trees (those that are infested with spruce beetles but have yet to show visual signs in their needles) and non-infested spruce trees. This find was especially exciting because these infested and non-infested trees were experiencing similar site and weather conditions, so differences that we detect in the GLiHT imagery will likely be due to the effects of the beetles, giving more confidence to the infestation detection algorithms that we develop.

An image captured by GLiHT as it flew over a beetle infested area. We have been working on identifying the infestation stage of spruce trees present in this imagery

On our second day the sun was shining brightly through only a few clouds, promising warmer and drier conditions for the day. We were joined by scientists from American University who were flying unmanned aerial vehicles (UAVs) over the beetle infested areas. The UAVs have visible, near-infrared, and thermal cameras mounted on them, which will provide a high resolution look at how trees respond to infestation. Together, the ground surveys, UAV flights, and GLiHT imagery provide information about infestation at broader and broader spatial resolutions, and should help to scale even further towards detecting spruce beetle infestation in satellite imagery. 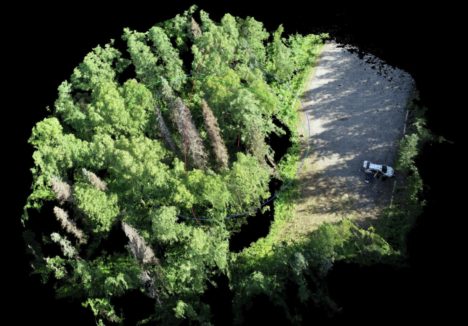 A 3D image created from the UAV flights. We can see gray/brown infested trees in the middle of the patch of trees, surrounded by other healthy and green-stage infested spruce.

Professor Mike Alonzo from American University getting ready to fly a UAV with a visible and near-infrared sensor. The pool noodle X helps to post-process and correct the collected imagery

The American University team introduced us to some “field equipment” I never thought I would be using: foam pool noodles bolted together in an X formation. They are used as targets in the UAV imagery along with high-accuracy GPS points to post-process the collected imagery. A GPS point is collected at the center of the pool-noodle X, and then later the image is warped so that the center of the X (the bright pool noodles make for highly visible targets) matches the GPS’d point. This process makes sure the image is spatially accurate, and also makes for some entertaining field work.

Another objective of this field campaign is to describe the structure and biomass composition of alder and willow stands in south-central Alaska. Because alders and willows are shrub species (i.e. not trees), they are generally not monitored as frequently or intensely. Recently, however, these shrubs have been growing at much higher rates, with some stands reaching over 10 ft in height. This means there may be a lot of biomass going un-accounted for. With a combination of intensive field sampling, and correlation of that data to imagery from GLiHT and the UAVs, we can try to determine the biomass and structure of shrub stands across the region.

Because of the odd structure of alders and willows, the field sampling is particularly tricky. Each stem and large fork branching off from a main stem must be measured for diameter and length, and this process can take quite a long time and involve scrambling in and under a tangle of branches and woody debris.

An alder forest we sampled along the coast. The complicated mess of stems and branches made for a long day.

Back at “base camp” we seemed to have gained a couple new neighbors: a female moose with gangly baby in tow. We snapped photos of the pair, and while the female didn’t really seem to pay us any mind, the baby alternated between wanting to be near his mom (who was ambling up the path alongside our cabin) and being afraid of getting any closer to us.

The mom and baby moose who liked to frequent our cabins.

Fieldwork in Alaska also has the major perk of spectacular views during afternoon and evening breaks. After a particularly long day of sampling in Denali State Park, we opted to stay in the area rather than drive the long three hours back down to Anchorage and were blessed with a beautiful view of “sunset” over the Alaska Range.

We finally had clear enough skies to get a full view of Denali, and that evening got a great glimpse of an Alaskan Range sunset (at midnight).

This entry was posted on Sunday, July 22nd, 2018 at 11:45 pm and is filed under NASA in Alaska. You can follow any responses to this entry through the RSS 2.0 feed. Both comments and pings are currently closed.