“Wow, what an exciting life you lead” is a seemingly cliché response I get when the topic of what I do for a living comes up in casual conversation with strangers.  I know for a fact (from having to clarify enough times, as I’m sure everyone aboard has also) that those people envision a cruise departing from Puerto Rico to entail some sort of warm, tropical, Steve Zissou-esque adventure, a life of freedom upon the open ocean, studying the dolphins that happen to swim by, sipping cocktails after work, visiting exotic countries, basically anything just short of playing shuffleboard up on the lido deck, because, you know, it is a job after all.  If you’ve been following this blog, you’ve already gotten a hearty sense that those kind of Instagrammable moments, drinking coffee and watching the sunrise, is punctuated by the other 23 hours and 55 minutes a day of exhausting, dedicated work to the science mission. 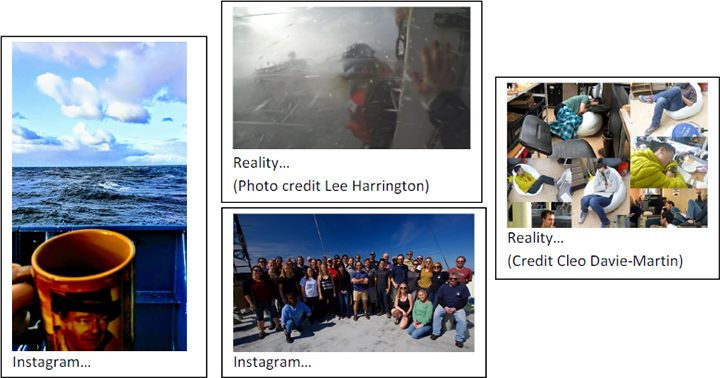 Expected versus the reality of a research cruise

The other morning I found myself chatting in the lab with Ben and Kay, wondering what to write about.  A prompt of “what do you do all day?” led to explaining there is really one goal I am setting myself out to achieve on any given day, week, or cruise.  And I’m still waiting, nearly 10 years later, to really achieve it.  The one goal I thought I almost had within my grasp on a few occasions, but the sea and the universe undoubtedly found a way to thwart in some way or another.  Boredom.  What?  Who has that goal?  Who wants to have a boring job?  What’s wrong with this girl, is she crazy?  But to me, it means nothing is broken that I have to figure out a way to fix in the middle of the ocean.  It means a full night’s sleep with no unexpected wake up calls.  It means I don’t have to hang on for dear life to avoid getting tossed out of the shower in the morning.  It means I know what I am going to work on that day and have no reason it won’t be done by the end of the day.  In the last week alone, I’ve woken up each morning thinking I’m in for just another day with my favorite NAAMES crew.  And then while recovering the optics instruments I end up wetter than when I stepped out of the shower a few hours before.  And then there’s been a shift so we decide to drop what we’re doing and take off for the next station.  And then a false alarm goes off in the fire system.  And then there’s a major equipment failure that leaves us drumming up every ounce of creativity on how we are going to accomplish the rest of the scientific mission.  And then 50 knot winds kick up, throwing everything on the ship, literally and figuratively, for a loop.  Are you beginning to see where I’m coming from when I say I could really stand to have a boring day once in a while? (It’s my ½ birthday today, maybe today will be my lucky day? Hi Mom! Hi Dad! Happy Anniversary! I digress…). 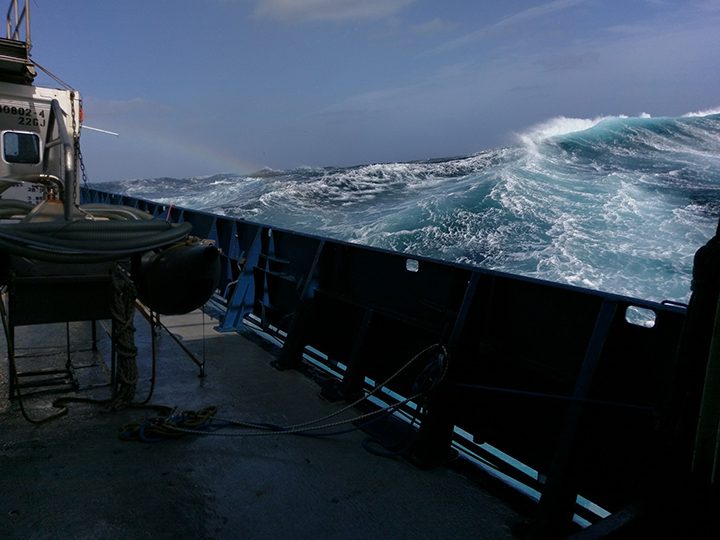 The best laid plans, thrown for a loop

As much as I kid about longing for an Office Space-like existence where my biggest worries are the TPS reports I might have to come in on Saturday to finish (I come in every Saturday, it’s not optional) and a printer that perpetually displays “PC Load Letter” (I already have one onboard that says that), being present and contributing to some of the most inspired research around is a truly humbling experience that I can’t believe I’m lucky enough to be afforded.  Even more than the research that might one day make the news (I confess, it is beyond sweet to be able to point to an article and say “I was there, I did that!), it is the everyday conversations and discoveries that pique my curiosity and un-bore-ify (I make up words, it’s a hobby) my life at sea the most.  The people and the instrumentation that NAAMES brings together ensures a never-ending dose of the kind of excitement that I don’t mind coming along in an atmosphere where you can’t help but get caught up in it.  In the same past week I described above, the aerosol teams detected some of the cleanest air on earth, where of all things, I’m most amused by the fact that the air is too clean to have my hot coffee produce any steam when I walk outside.  During humdrum CTD cast #9 of this cruise, we profiled nearly 65 degree Fahrenheit water mixed down to a depth of 600m…in the North Atlantic…in winter.  I’ve literally seen thousands of CTD casts in my life, and I’ve seriously never seen anything like that.  And those 50+ knot winds we saw a couple times this week?  I’m from California where any deviation from sunny and 75 degrees makes headline news, so it’s really in the lousiest of weather that I’m always the first person outside watching the show.

The struggle is real

This -something new around every corner- is the nature of the sea-going business.  No one can possibly predict what the final week of NAAMES will bring to the Atlantis, the scientists, and the crew aboard.  No telling what papers might come out of the research or what new questions or projects will be spawned, or what “remember when” stories the crew will still be telling about NAAMES in the years to come, but I’m pretty sure no one will tell you coming out here to study the North Atlantic was boring.

This entry was posted on Wednesday, April 4th, 2018 at 4:56 pm and is filed under NAAMES (North Atlantic Aerosols and Marine Ecosystems Study), Uncategorized. You can follow any responses to this entry through the RSS 2.0 feed. Both comments and pings are currently closed.