Sleeping on a ship…

Sunsets on board the R/V Atlantis

Sleep. We all need it. But how much do we actually need? As I’ve discovered the past couple of days, half an hour just won’t cut it! I became a grumbling, tired zombie – an absolute pleasure to be around (not…). Throw in an extra 2-hour post-second-breakfast nap, however, and I found myself marginally above the lower bounds of “functional”.

During the main science transect, particularly station days, most of us find ourselves trying to adhere to obscure sleep schedules – and it usually doesn’t come close to the “required” 8 hours per night (or day, if that’s how your schedule rolls). Myself? I usually sleep from 8 pm until 2 am and rise in time for the first overboard deployments of the CTD rosette. For many, 6 hours of sleep is realistically about all you can hope for on a station day. But existing on 6 hours of sleep a night is not something I could sustain for the entirety of the cruise… Instead, I have adopted the aforementioned post-second-breakfast nap from 8:30-10:30 am. It is a luxury, for sure! I sit down to fresh pineapple and a full cooked breakfast, then I climb straight into bed. Ah, bliss – those are my favorite hours of the day! Nothing can top the splendor of a few stolen quick winks. Not even a pod of pilot whales playing around the bow. Not even our pet brown boobie preening itself atop the balloon shed. Not even a successful balloon launch facing straight into a rising sun under beautifully calm conditions. Not even bobbing up and down at the railings of the second-floor deck ducking behind massive waves of spray as they careen over the bow. Ok, I lied. Maybe the latter could win out…

The first week or so of the trip, we were treated to warm, sunny weather and calm seas. But in the past week, the seas have taken a turn for the worse (or more “interesting”, depending on your perspective). There is nothing quite like propelling yourself into the top bunk on the O3 deck to the roll of the waves. Timing is everything! We won’t even mention the various approaches for ejecting oneself from the top bunk – some of those involve broken toes (ay Jason?). One might think that we would be gently lulled to sleep by the slop of the waves. In 5-foot seas, that may be true. But when the 20-foot seas roll in, sleep is out of the question! If you lie on your side, prepare to be promptly thrown from your bunk. If you lie on your back, be prepared to withstand the G-forces thrusting your stomach contents back up towards your throat every few seconds. One second, you are light and airy; the next, you weigh 50 tons and you need all your strength just to lift your limbs off the bed. Some might argue that lying on your stomach is the most stable option (think starfish). I would agree – that is, if you enjoy having the pressure of your body  smooshing your eyeballs into the pillow – it’s enough to give anyone a headache! Luckily, there are some work-arounds that we can adopt to make sleep more practical. For those of us on the top bunk, life jackets stuffed under the edge of the mattress help wedge us in place – no more falling out of bed and restricted rolling. Tucking your sheets in tightly around you can also be used with moderate success (but requires diligence and continued effort to employ daily). Drugs? Drugs can sometimes help, but taking a sleeping aid and having to rise for sampling 3 hours later aren’t really cohesive options.

For those of us on the O3 deck, the rolling waves aren’t all that we have to contend with. Perhaps the most infuriating night of my life was at our northernmost station during NAAMES_2. Every 2 minutes (yes, I timed it) for literally the entire night, the fog horn (situated right outside my window) blasted an obnoxious “bruaump”. Nothing can contend with that! Nothing! The lower decks don’t come without their share of noise either. In the outer rooms, the waves crashing into the side of the boat provide the music of the night. The inner rooms are subjected to the consistent, mind-numbing thud of the bow thrusters. Noise cancelling headphones and music are key (fighting inescapable noise with more noise)! 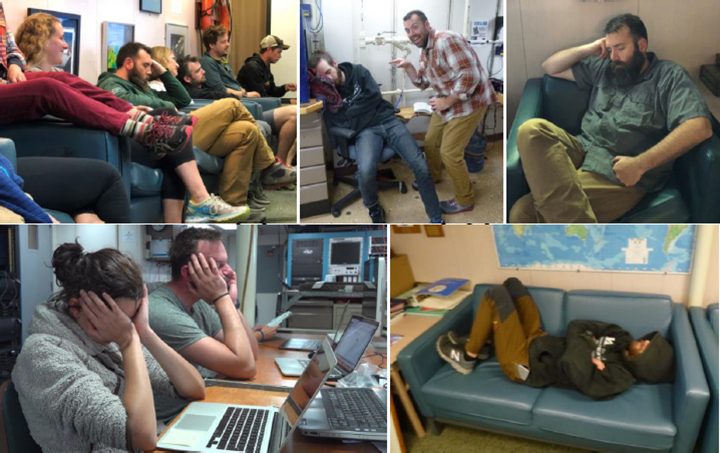 Some people know all the best sleeping spots!

So how do we cope? For me, exhaustion usually sets in after a few atrocious nights of sleep and I just pass out in my bunk. Otherwise, opportunistic naps. Lots and lots of opportunistic naps! Any location is fair game – the library, on the floor, during science team meetings, in the lab, the back deck… Now, it’s not all so dire. In the calmer southern waters nearer to Puerto Rico and often when we get closer to Woods Hole, we are gently rocked to sleep by calmer seas. Our transit days usually allow for “normal” work hours, increased leisure time, and glorious, glorious sleep! So, can we head home now? I’m looking for some sleep… 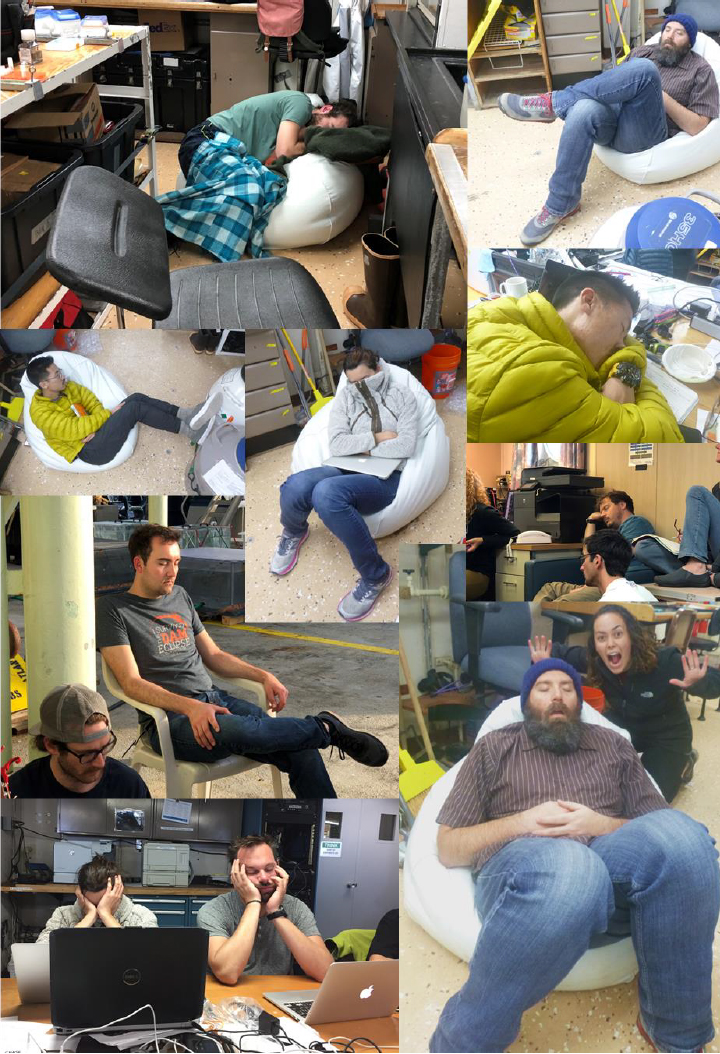 The many sleeps of science.

This entry was posted on Wednesday, April 4th, 2018 at 1:17 pm and is filed under NAAMES (North Atlantic Aerosols and Marine Ecosystems Study). You can follow any responses to this entry through the RSS 2.0 feed. Both comments and pings are currently closed.