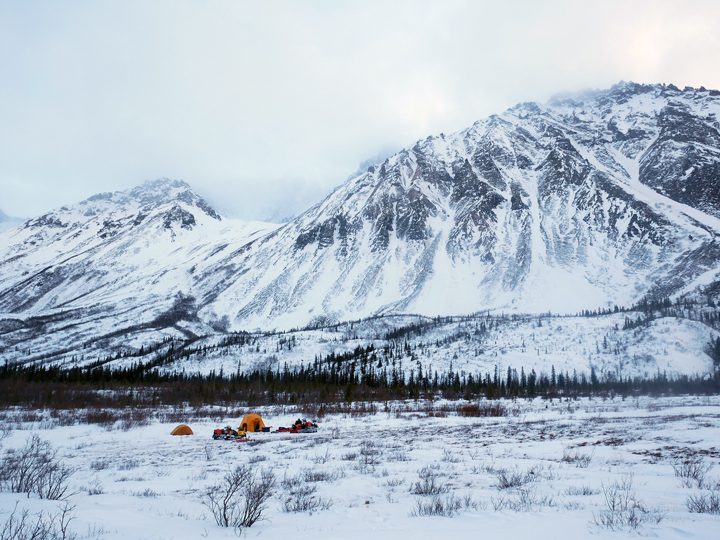 On March 14, four members of the NASA ABoVE Dall sheep project (lead PI Laura Prugh and PhD students Chris Cosgrove, Ryan Crumley, and Molly Tedesche) headed into the Wrangell Mountains for a week-long field expedition to conduct snow surveys. These snow surveys are critical to the project’s goal of understanding how snow conditions are changing and affecting Dall sheep in northern alpine regions. Riding snowmobiles for more than 20 miles into the wilderness, breaking trail and clearing brush for the last 5 miles (and sometimes getting stuck), the crew set up base camp in an open meadow. It turned out this meadow was home to a resident bull moose, who kept a respectful distance and was often seen browsing nearby. Snow levels were unusually high this year, making for a useful contrast to last year’s surveys and giving team members a good snowshoeing workout. Navigating through deep snow, thick brush, and over steep terrain, the team recorded snow depth using a Magnaprobe, dug snow pits to examine the snowpack stratigraphy (layering over the season), and measured snow track sink depths of Dall sheep and one of their main predators, coyotes. The team was able to reach 17 of the 22 sites that had been established in September to record snow depth every hour using game cameras and snow stakes; the remaining 5 sites were in terrain that was unsafe to reach due to avalanche danger.

The team’s luck with clear, warm weather broke on the last day of fieldwork. Amid a snowstorm that was picking up momentum, Prugh spotted an area with a maze of coyote tracks and what appeared to be the faint traces of white fur on the snow. Investigation confirmed the site was a sheep kill, and Prugh quickly dug a pit to record the snow characteristics that may have contributed to the sheep’s demise. Perhaps the snow was dense enough for the coyotes to run on top of the snowpack, whereas the sheep, with a heavier body mass and small hooves, floundered in the deep snow?

Fortunately, the snowstorm ended overnight, and the crew awoke to blue skies overhead and 8 inches of fresh powder blanketing the spectacular landscape. Analysis of the field data over the coming year will improve efforts to model and map snow characteristics across the mountainous region, and reveal how snow properties affect the vulnerability of Dall sheep to predation. 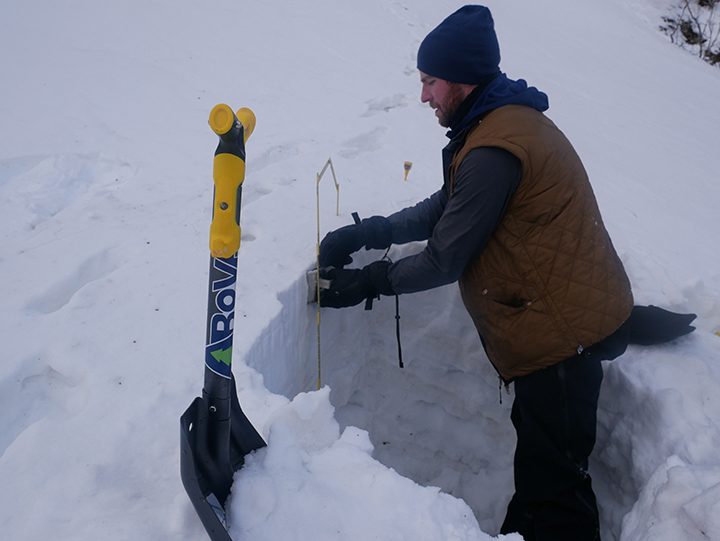 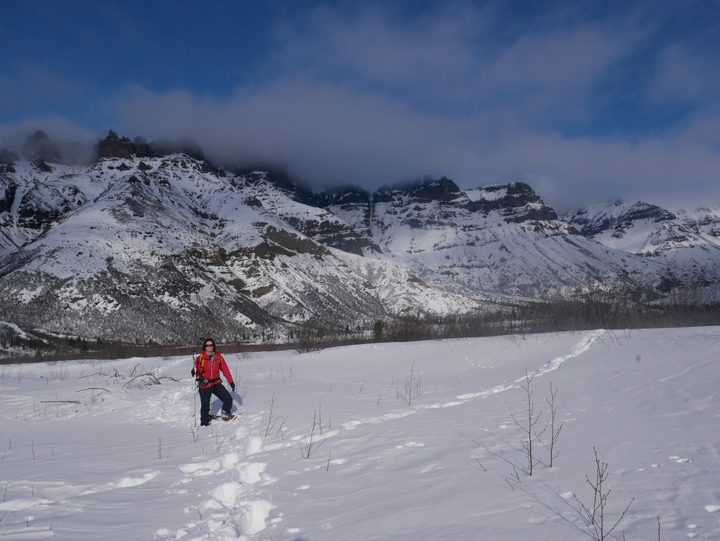 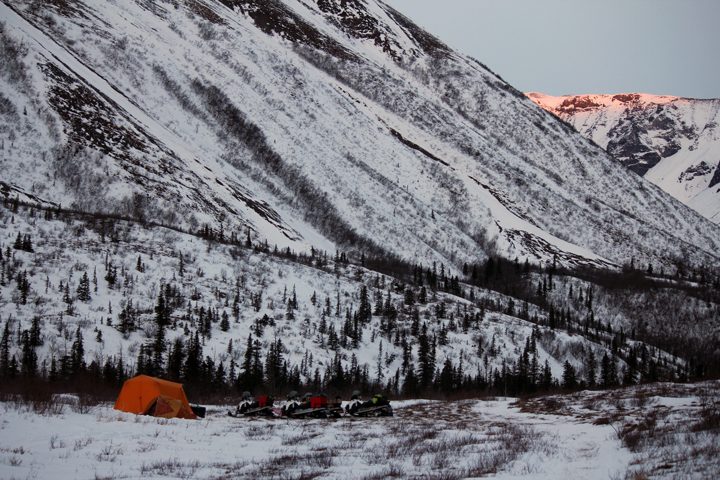 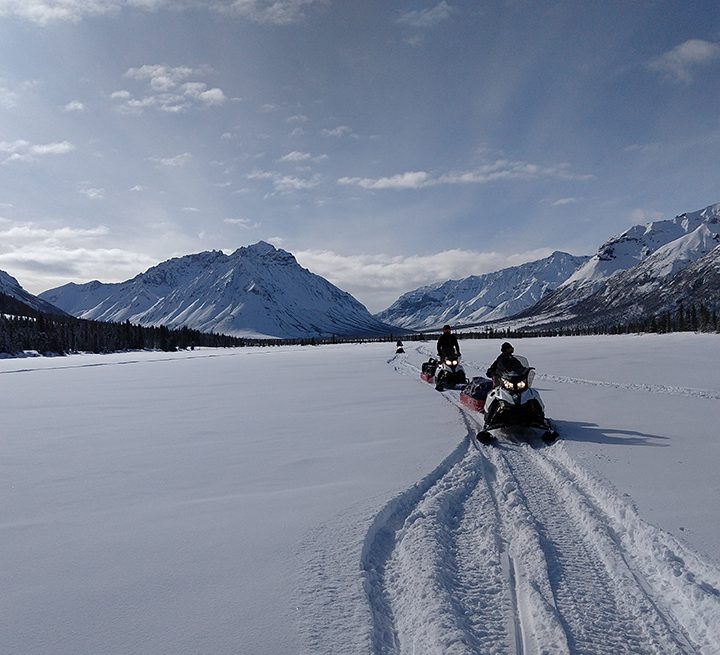 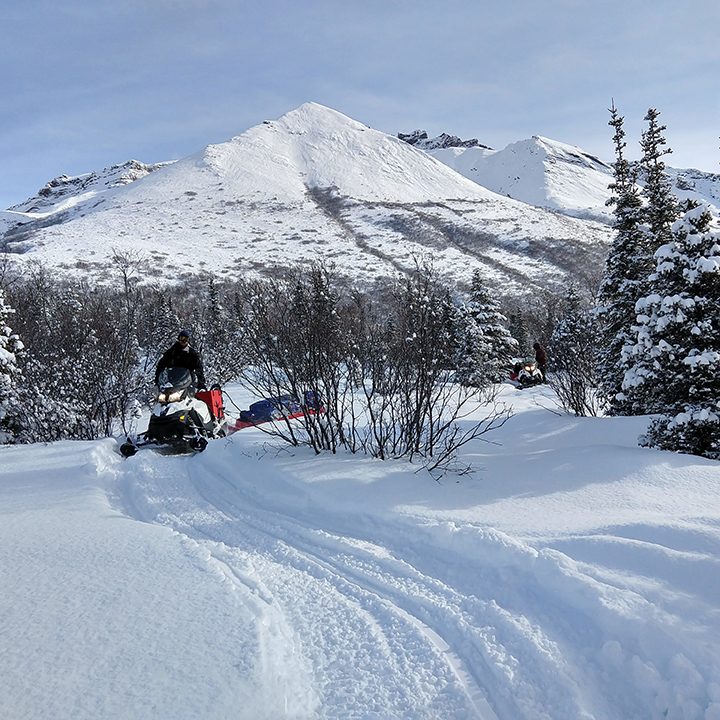 Snowmobiling expedition in the Wrangell mountains to conduct snow surveys.

This entry was posted on Friday, March 30th, 2018 at 12:58 pm and is filed under Arctic-Boreal Vulnerability Experiment (ABoVE). You can follow any responses to this entry through the RSS 2.0 feed. Both comments and pings are currently closed.

One Response to “Wrangell Mountain Expedition”