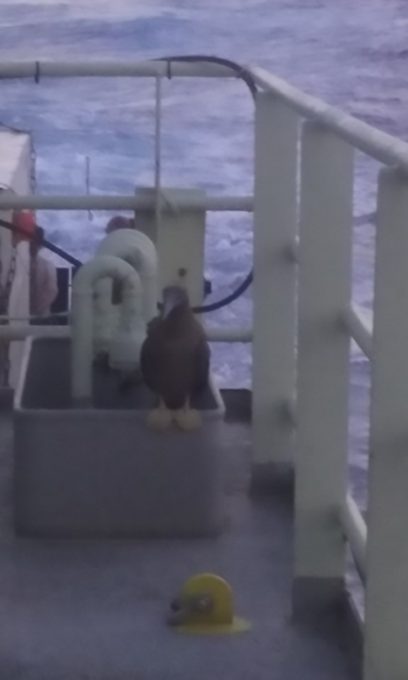 A seabird catching a ride on the R/V Atlantis as it moves north.

Like this young pelagic seabird (let’s call it a juvenile gannet) soon to spend its life at sea, taking a short respite on a chance encounter, I find myself fortunate to have found the research vessel Atlantis (as part of the NAAMES IV campaign). We are still on our trek north to our first station, and as a newcomer to Craig Carlson’s lab I have been learning the various techniques his lab uses to constrain DOM cycling in the surface ocean. My training began by twice daily measuring the incorporation rate of tritiated leucine into heterotrophic bacteria (i.e., bacteria production rate). We are measuring the incorporation rate of tritiated leucine as a proxy for the uptake rate of organic carbon, as dissolved molecules, by heterotrophic bacteria.

Because tritiated leucine is a radioactive compound I have do this work in, essentially, an outfitted shipping container, called the “Rad Van”. No it’s not the “totally rad, man” kind of Rad, but the Rad-ioactive kind of Rad is pretty awesome because it is used to tell us something about the environment. The processing time of surface samples has been fast so far, something like 10-15min twice per day, but we will soon begin full casts to 1,500m twice per day, requiring most of the day to work through what we collect.  Reflecting back on life in the Rad Van these last few days, it’s not so bad tucked away in there; it’s isolated and so can be quiet and at times lonely but to know that the isotopes will remain confined to that space is reassuring. As far as changes in bacteria production during this cruise, we expect rates to be high at the surface ocean decreasing with depth and increasing as we work northward into the more productive spring bloom of the North Atlantic. The idea is that the regions of the ocean with higher bacteria production rates are associated with greater organic matter sources on which they had adapted to grow at faster rates. 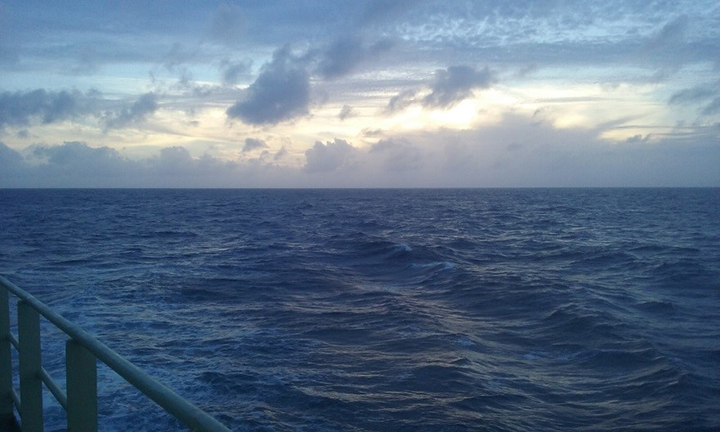 Though both this work and the NAAMES group are new to me, I am enjoying the work and eager to start looking at data. Many of the PI’s, including the Carlson lab, will participate in subsequently NASA supported cruises as part of the EXPORTS program. And I look forward to continuing this work on as a participant in that program. So perhaps once the trip on the Atlantis has provided its brief oasis, as it has for the juvenile gannet’s migration, I will be ready for the next leg of the journey as part of the Carlson lab.

This entry was posted on Monday, March 26th, 2018 at 1:53 pm and is filed under Uncategorized. You can follow any responses to this entry through the RSS 2.0 feed. Both comments and pings are currently closed.