Back to McMurdo, with its science essentials

Tom and I have returned to McMurdo Station!

Our traverse is complete, our gear has been stored for next season, and we are ready to head north to warmer climates. But in the meantime, we are awaiting our flight to Christchurch, New Zealand, at Antarctica’s largest research station.

McMurdo is one of three permanent US research stations in Antarctica. The other two are Amundsen-Scott South Pole Station and Palmer Station, which is south of South America. McMurdo has beds for approximately 1,000 people, but while we have been here, the population has hovered between about 750 and 825.

While there is a research station operated by New Zealand just 2 km away, McMurdo is relatively isolated. As such, there are facilities here that provide all of the basic essentials required for living in the polar regions, such as power, heat, and water. McMurdo has its own diesel-based power plant, providing lights and heat to the station. The station gets its fresh water through the desalinization of the sea water in the neighboring bay via a method called reverse osmosis. And McMurdo has its own waste-water treatment facility. To operate a station this size, and in this environment, McMurdo also requires an airfield, a galley, and all of the staffing that goes along with running a small town. It is quite an operation. 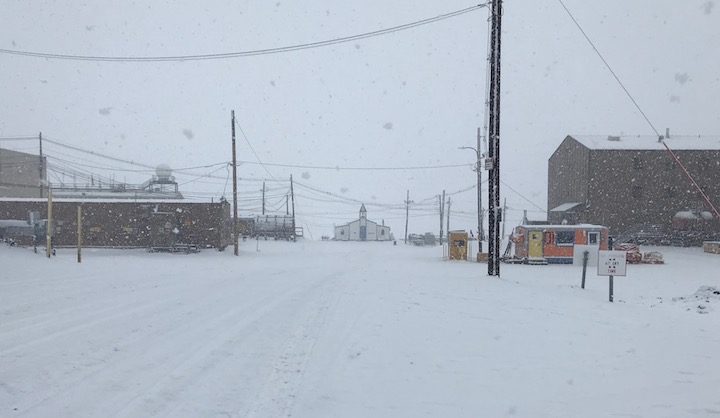 McMurdo on a snowy day, with the chapel in the background. (Photo: Kelly Brunt)

McMurdo station also has specialized facilities that support the cutting-edge science that happens here. These facilities include a sophisticated laboratory that is capable of housing a cross section of Antarctic research disciplines such as glaciology, geology, meteorology, and biology.

The research that takes place here also includes really cool meteorite science! The search for meteorites is a bit simpler here than in other parts of the world. Since Antarctica is a thick sheet of ice, rocks found on the top of the ice sheet are often associated with debris fallen from space; these meteorites stand out against the white surface. Plus, the flow of the ice organizes the meteorites, making them more centralized for collection. Some of our colleagues from NASA Goddard Space Flight Center are part of this effort. 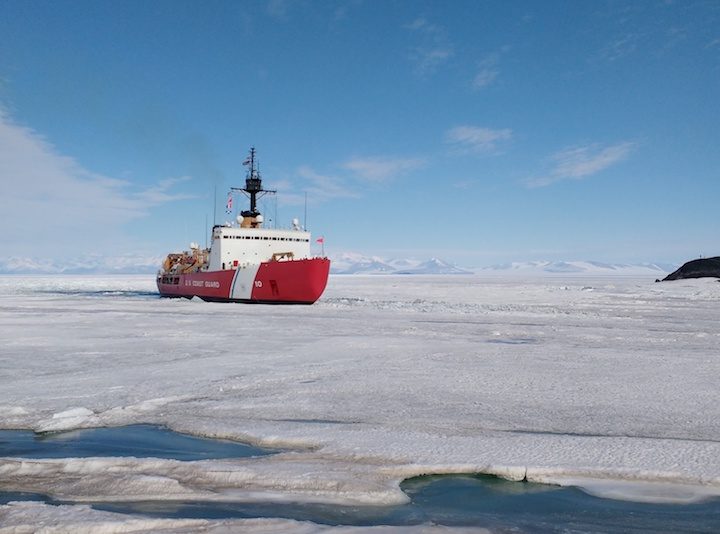 The pier in town is currently the busiest spot on station. The US Coast Guard Cutter Polar Star has cleared a channel into McMurdo Sound, giving three other vessels access to town. The first is the Nathaniel B. Palmer, the US Antarctic Program’s premier research vessel, which has been in town for the past few days. Simultaneously, the entire station is preparing for the arrival of the two other ships: the tanker Maersk Peary brings in the annual fuel supply, and the Ocean Giant cargo ship brings in the food and supplies for the following year.

The Nathaniel B. Palmer in McMurdo Sound (Photo: Kelly Brunt)

Tom and I are scheduled to leave McMurdo on the next flight. But the weather has deteriorated and we are left patiently waiting for it to clear. We are extremely happy with our successful field season and have had a fantastic trip. Thanks for reading and following along.

This entry was posted on Tuesday, January 23rd, 2018 at 12:19 pm and is filed under ICESat-2 Antarctic Traverse. You can follow any responses to this entry through the RSS 2.0 feed. Both comments and pings are currently closed.

One Response to “Back to McMurdo, with its science essentials”