What Day Is It Anyway?

Life on an oceanographic research vessel is definitely different than daily life ashore. For the crew there are regular watches, to man the bridge, deck, and engineering. Keep them very busy are the operation and maintenance of the ship, sustenance and safety of all onboard, and fulfilling Revelle’s scientific mission. For the scientific party the work and watches are quite malleable depending on what the main occupation of the day might be. There are four primary activities of a day – working, sleeping, eating, and entertainment. 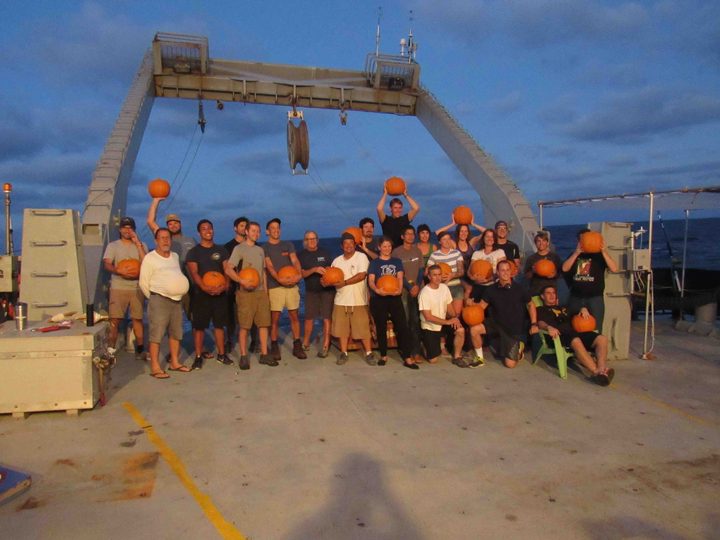 Work: There is some work going on at every hour, around the clock. Shifts have been set up to manage the deployments and recoveries of the Surface Salinity Profiler and its associated laser/image experiment. There are three-person shifts around the clock to attend to the Underway CTD. Likewise there are volunteers for the balloon launches (atmospheric sounding) four times per day. The precipitation radar team also will manage 24 hour per day operations as we dedicate a couple weeks of work in the rainiest areas. Someone must always be awake to monitor “autonomous” systems processing water from the sea snake system (more on that during the last week of the voyage).

Sleep: Because of shift work, there may be people asleep at any hour of the day or night. The ship is a noisy place, so it is common to use ear plugs or noise suppressing ear gear. Noise arises from the constant drone of the engine, water slapping the hull of the ship, doors and hatches closing, grinding and sanding on deck, winches, and simply people in close quarters. The opportunity for true silence awaits ashore. It does not occur aboard ship.

Eating: Three meals per day are prepared by Jay and Mike. Breakfast 0730-0815. Lunch 1130-1215. Dinner 1700-1800. The food is plentiful and very well prepared. Sunday dinner is notable as “steak night.” There are options for the vegetarians! Unfortunately, there is inadequate space in the dining area for everyone to sit at once. Those on watch get to eat first, then others follow. The dining motto is “eat it and beat it.” Not very civilized, but necessary! We try hard to be finished and plates cleared by the end of the appointed meal time.

Entertainment: The ship has an extensive library, so there in no shortage of good reading material if one did not bring books from home. There is also a lounge for watching movies. It is quite common for a card game to get going after dinner. Some people bring craft work like knitting for entertainment. There are also opportunistic entertaining events – like the pumpkin carving contest on this expedition or fishing near moorings. There is gym equipment and a weight room for those wishing to work out. 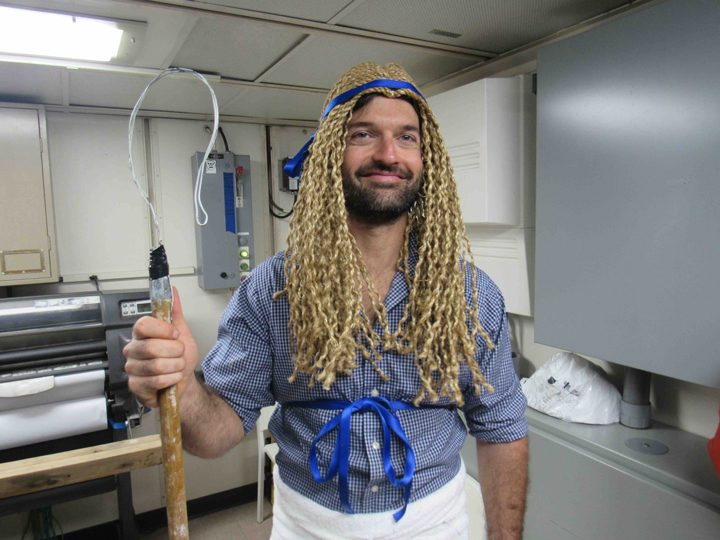 Ben, who minds our flock of drifters. 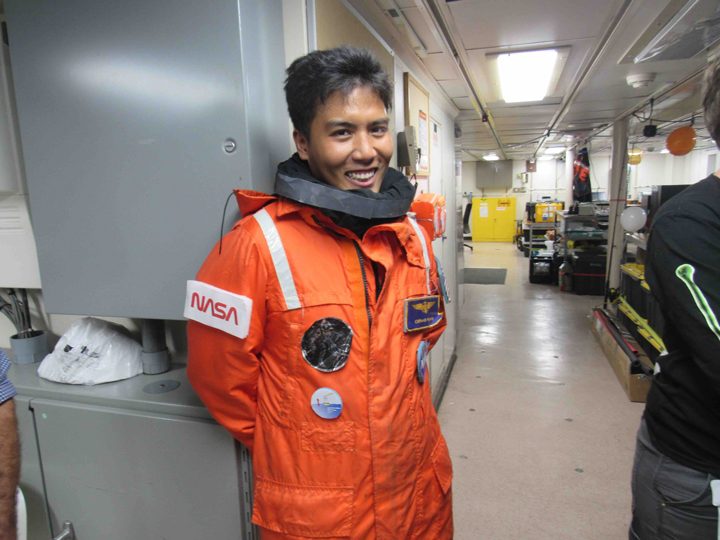 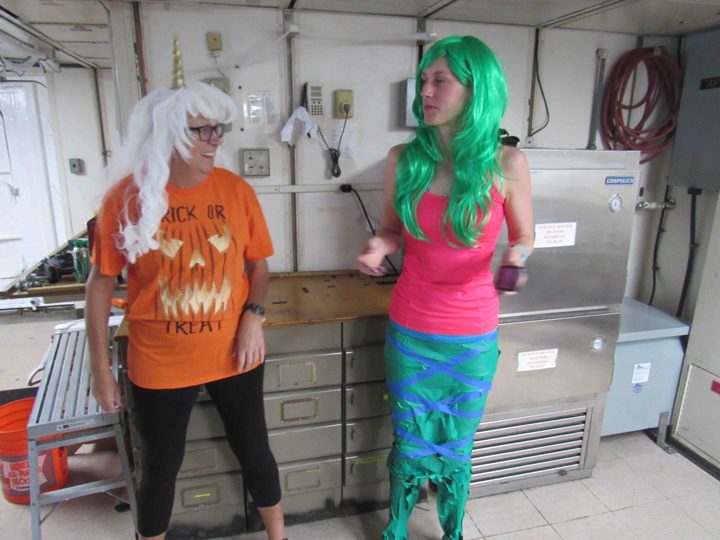 For scientists at sea there is always the call of work back home. I know that people are reviewing the dissertations of students, preparing journal articles for submission, and preparing proposals to submit for new funding. Your blogger too has such duties – sending out emails to scientists about recently reviewed proposals, preparing for a large ocean conference in 2019, and writing a short article for Oceanography.

This voyage has been blessed with a small side-show by a couple of Egrets. They seemed near death when they joined the ship late last week.  After taking on some food and freshwater, thanks to Trina from UW APL, they are taking ownership of the fantail of the ship and providing good entertainment. I will keep you apprised of their situation. 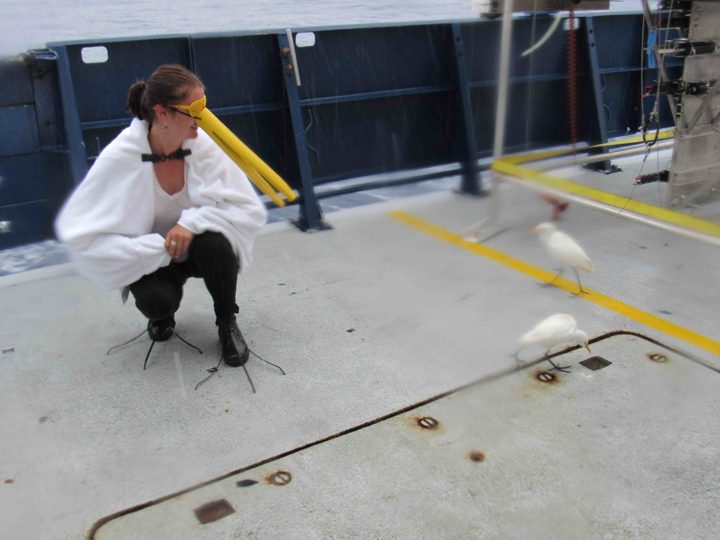 Trina in costume with the egrets.

We had wonderful laughs and a few minutes of fun on Halloween. Costumes were called for while attending the daily science briefing. Photos throughout this blog post capture the moment much better than my words.

Science lecture for the Halloween party!

This entry was posted on Thursday, November 2nd, 2017 at 1:56 pm and is filed under Salinity Processes in the Upper Ocean Regional Study (SPURS). You can follow any responses to this entry through the RSS 2.0 feed. Both comments and pings are currently closed.

One Response to “What Day Is It Anyway?”