I try not to make this blog a travel diary, but sometimes an event is worth a sidebar. So, before I launch into words about our voyage planning, I must tell you about the flying fish.

No matter how many times you go to sea, flying fish are a wonder of nature. Just the fact that we see individual fish scooting above the surface for long distances (many 10s of yards) is amazing enough. However, there are times when the deep blue surface of the water transforms to a shimmering silver and miraculously turns into hundreds of small flying fish launching themselves as one in the same direction. It’s amazing to watch and hard to capture on film from a moving ship. The fish don’t fly as much as glide with “skitter,” as they touch the water intermittently and then buzz their tail at the surface like an outboard motor. With this added energy they keep themselves gliding above the water surface using their outsized pectoral fins as glider wings. They must have a tough life—with large fast fish like tuna and mahimahi stalking them from below and birds stalking them from above. However, they must have a keen sense for when to be in the water and when to launch into the air—and evolution has provided them with the means to act on the threats. How they coordinate their mass takeoffs and landings as a school is, I would guess, a mystery. It is certainly awesome! 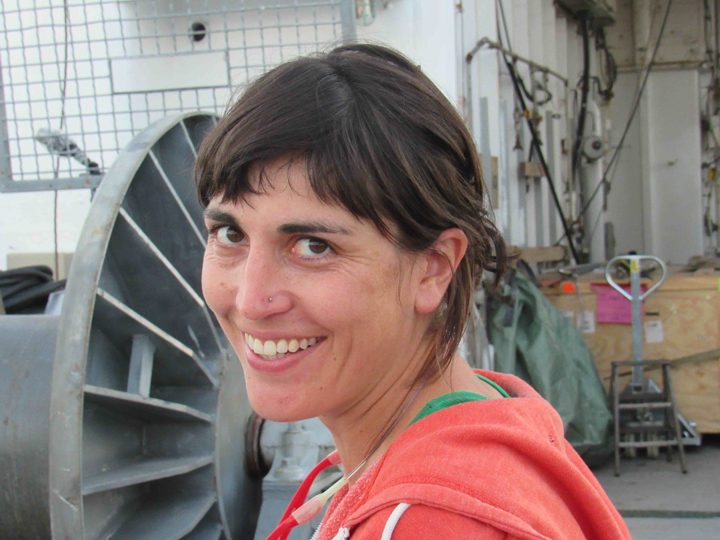 So, I digress! Our Chief Scientist, Kyla Drushka, from the Applied Physics Lab at University of Washington has been coordinating planning and logistics for this voyage for about a year—since the end of the SPURS-2 deployment voyage in 2016. She has a complex assignment because there are 24 distinct scientific instruments or suites of instruments aboard the vessel—each with a different responsible scientist either ashore or aboard. Coordination of the sampling from all these instruments and how it interacts with the location and speed of the ship is the primary job of the chief scientist. It is akin to conducting a symphony orchestra of oceanographic measurements—all of which require special interaction with the symphony hall in order to operate properly—to make good scientific “music.” Some sensors require us to be moving fast, some slow, some upwind, some downwind, some stopped. Some require our full attention and some operate autonomously. On site, here in the tropical ocean, we are recovering instruments deployed from the ship last year, deploying and recovering a variety of devices that sample only the weeks we are here, and deploying permanently some instruments that become part of the sustained Global Ocean Observing System. From the ship itself we are making a wide variety of detailed measurements of the ocean as we move about. Kyla has listened to everyone’s requirements and delivered a symphonic arrangement that sounds wonderful in our mental rehearsal of the scientific findings. All we have to do now is execute the arrangement in the real world.

Overall this SPURS voyage, like others before, seeks a balance in the overall plan of action. Ultimately the goal is to learn how to interpret satellite measurements of surface salinity. This cannot be done without assessing the ocean physics that effect surface salinity and the “forcing” of signals by evaporation and precipitation. Thus, the expedition includes the ways and means for us to assess upper ocean mixing, the role of eddies in stirring the upper ocean, a detailed look at all scales of precipitation, and estimates of evaporation. Of course we cannot measure everything everywhere, so the primary role of the experiments and expeditions are to collect observations that can help us perfect computational models of surface salinity behavior that accurately mimic our satellite observations. Models can deliver estimates of what is happening around the globe and over long stretches of time – scales out of reach from ship observations. Good models lead to better prediction and we certainly need better predictions of ocean behavior for high quality predictions of climate. That kind of impact is what motivates the SPURS team.

The video below shows the view from a small boat as scientists approached a mooring in order to change some batteries. The R/V Revelle is visible in the background. (GoPro video by Raymond Graham/WHOI Mooring Group.)

Finally, as I was drafting the paragraphs above, a sea bird landed on the stern of Revelle. Not just any sea bird but a Peruvian booby. This bird is either blown of course and needs a rest or I need to go back to Booby identification school! I bid you farewell for the day and hope offended birders will tell me how unusual it is to find a Peruvian Booby at 125W, nearly 20 degrees north of the equator. 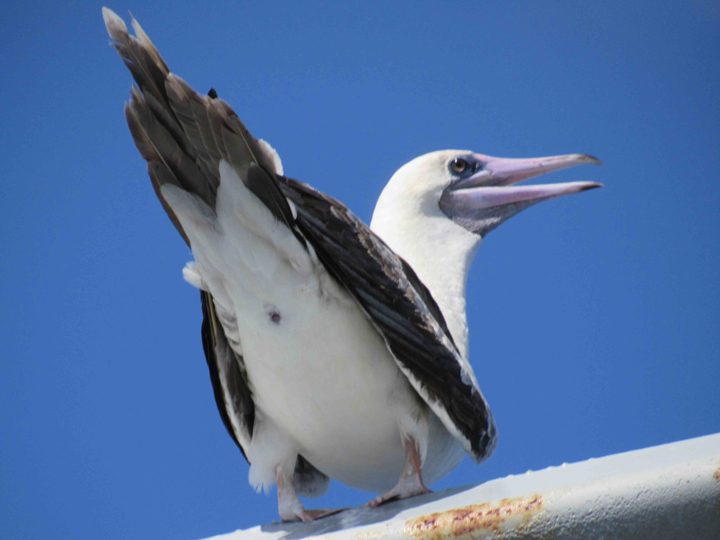 This entry was posted on Monday, October 23rd, 2017 at 2:53 pm and is filed under Salinity Processes in the Upper Ocean Regional Study (SPURS). You can follow any responses to this entry through the RSS 2.0 feed. Both comments and pings are currently closed.