One Last Intense Snapshot of the Ocean

Yesterday, Monday October 16th, I joined the Research Vessel (R/V) Roger Revelle for five weeks at sea in the Pacific Ocean. It feels great to be heading to sea again. This NASA field campaign has lasted more than a year, with intense shipboard work starting in August 2016 and finishing with this voyage in October-November 2017. A web of sensors has been deployed to monitor one oceanic region over an entire year. The primary goal of this voyage is to provide one last intense snapshot of the ocean and to recover moorings and other gear deployed over the last year. 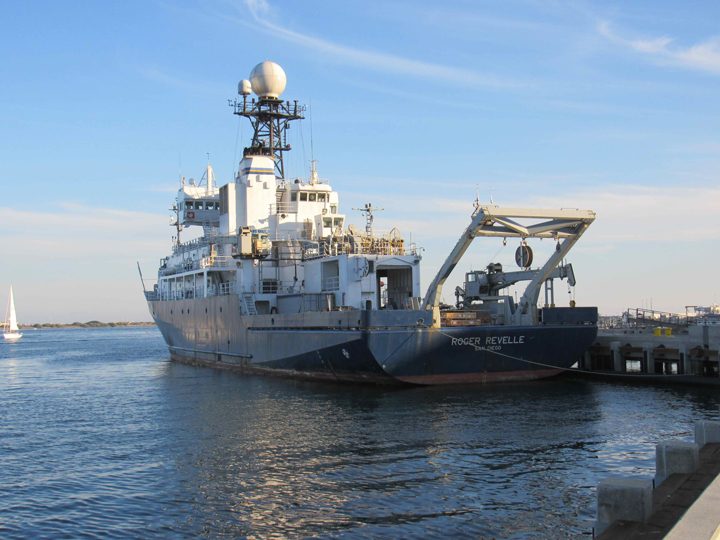 The R/V Roger Revelle in San Diego just before departure. 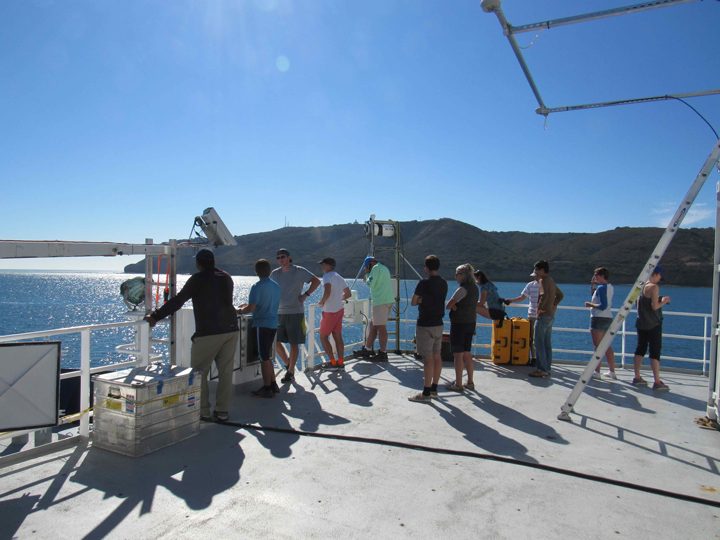 Scientists take one last look at San Diego as we depart.

The history of SPURS, from SPURS-1 in 2012-13 in the North Atlantic Ocean to SPURS-2 in the eastern tropical Pacific Ocean is captured in prior blogs to this site.

As Physical Oceanography Program Scientist at NASA Headquarters for the last 20 years, my primary job is supporting our satellite missions related to measuring physical characteristics of the ocean (principally, temperature, salinity, sea level, and winds) and supporting the oceanographers that generate knowledge from such data. True understanding requires our fully appreciating the variations of the satellite data in the context of ocean physics. That requires getting out there and getting wet from time to time.

R/V Revelle (home port – Scripps Institution of Oceanography, San Diego, CA) departed San Diego on 16 October 2017 and returns to San Diego on 17 November. The central location of the field work is about 5 days voyage southwest of San Diego at 10N, 125W. Details of the expedition plans are available here. I hope to bring you a steady stream of expedition blogs between now and mid-November 2017, including why NASA is focusing attention on this particular spot in the open ocean.

Since NASA’s launch in June 2011 of the Aquarius instrument to measure ocean surface salinity from space, the agency has embarked on field campaigns to understand surface salinity in great detail.  This work has illuminated new ways of thinking about the ocean’s role in the global water cycle. SPURS-2 is the latest work to link the remote sensing of salinity with all the oceanic and atmospheric processes that control its variation.

The ocean is the primary source of moisture for the atmosphere.  Evaporation of water from the sea surface leaves the ocean saltier (more saline).  Precipitation over the ocean leaves the ocean fresher (less saline). The global pattern of average salinity at the sea surface approximately represents the balance of evaporation and precipitation at any locale (other factors such as river runoff, ice melt, and ocean motion and mixing complicate the picture). Many details of the interaction between ocean and atmosphere that lead to moisture transfer and signatures in ocean salinity are poorly understood. SPURS-2 is particularly focused on how, in one of the rainiest places on Earth, rainwater enters and impacts the ocean.  During the blog in the coming month, you will hear more about how and why oceanographers focus on such a problem.

In 2012-2013 SPURS-1 in the North Atlantic Ocean focused study of ocean processes where evaporation dominates the salinity of the surface ocean. I blogged during the September 2012 work from R/V Knorr. Among other things, we learned that surface salinity variations in that part of the world can be directly connected with precipitation patterns over the nearby continents.

At the opposite extreme from SPURS-1, SPURS-2 focuses on an oceanic regime where precipitation dominates the salinity characteristics of the surface ocean. The two extremes call for significantly different approaches to measuring and studying the upper ocean. We use many of the same tools from SPURS-1 (instrumented moorings, profiling floats, surface drifters, and gliders) but deployed in new and novel ways.

The crew and scientific party on R/V Revelle almost 50 in all. As you read future blog entries you will get some sense of what its like for such a group to work closely together for five weeks in the confined space of an oceanographic research vessel. Seasickness? Food? Watches? Sleep? Drama? Boredom? Sea life?

So, if I get this right, and you continue to follow this blog, you will get a sense of how some oceanographers go about their work, what technologies are involved, what is discovered, and how all this impacts lives, including yours, and what you might experience if you were aboard. I’ll do my best to get this right!

This entry was posted on Wednesday, October 18th, 2017 at 11:19 am and is filed under Salinity Processes in the Upper Ocean Regional Study (SPURS). You can follow any responses to this entry through the RSS 2.0 feed. Both comments and pings are currently closed.

2 Responses to “One Last Intense Snapshot of the Ocean”