A Flurry of Activity

Boreal spring can look a lot like winter. Over the past three days the Boreal Centre has gotten snow, snow, and more snow. According to Nicole we’ve gotten more snow in the past few weeks than they got all winter! But snowflakes weren’t alone in the sky; we also witnessed a flurry of robin activity. The snow conditions on Sunday and Monday were harsh enough to prevent the robins from traveling, but not cold enough to discourage them from foraging. We spent both days pacing between the windows in the Boreal Centre watching a flock of about 50 robins flitting around the treetops. To encourage the robins to forage near our nets we did our best robin impressions and kicked snow away to reveal open spots of bare ground.  Luckily for us, with the snowy conditions halting their migration the flock used the opportunity to fuel up. In just two days we caught 14 robins!

The Boreal Centre in a snowstorm on April 23 (top). Robins perched in the bushes near our net. The net is nearly invisible, but extends to the left from the vertical pole (bottom). 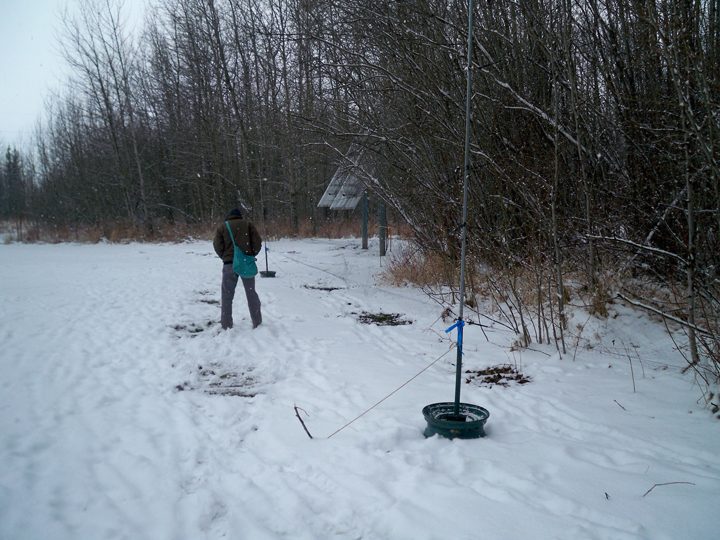 Despite the rising temperatures and sun breaking through the storm clouds as we rolled up our nets on Monday night, we woke up to the largest snowfall we’ve seen on Tuesday morning. The snow was so deep that we knew no robins would be able to forage on our field if we didn’t help them out. We grabbed our shovels and cleared foraging trenches around each of our nets, hoping hungry robins would take advantage of them. Unfortunately, Tuesday’s weather must have been stormy enough to convince the robins to take a true snow day as we only saw a couple of individuals.  We only caught one bird but it turned out to be a relative of the robins, the Hermit Thrush. 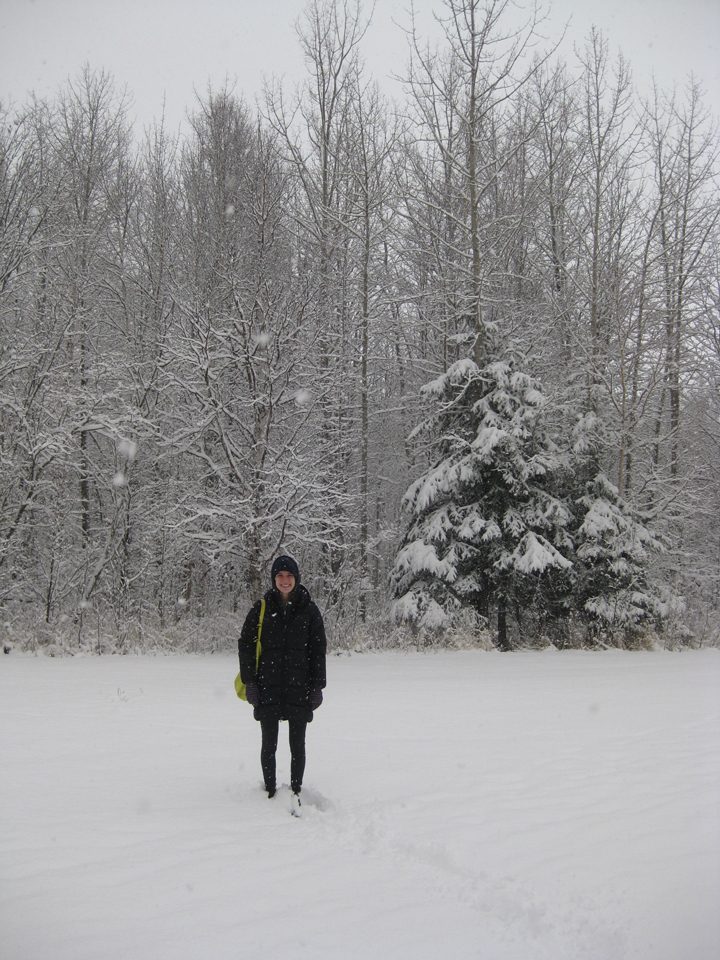 A sole robin braving the heavy snowfall on April 25th. 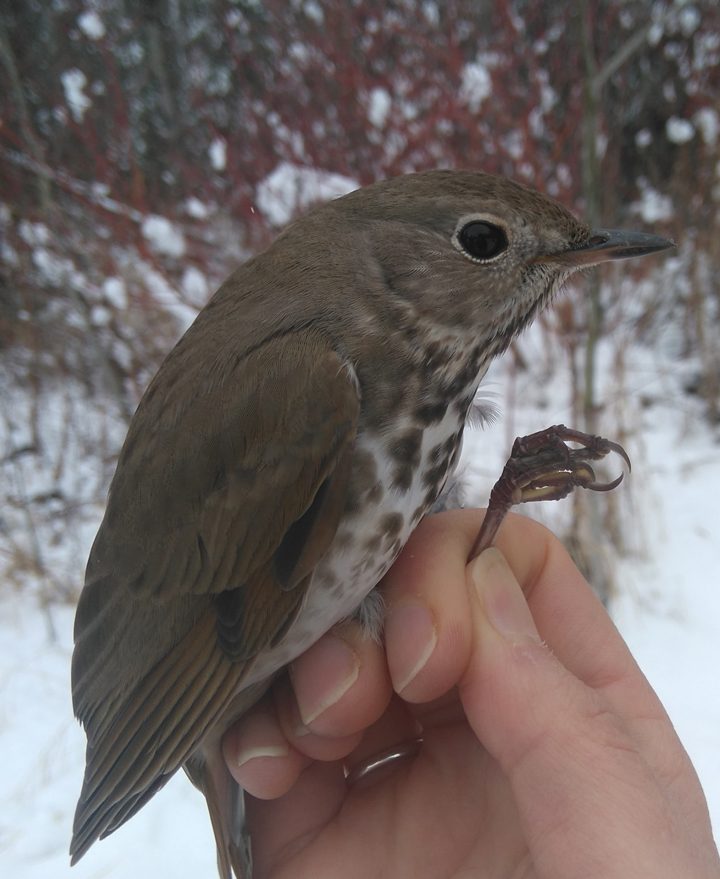 A relative of the American Robin, the Hermit Thrush. 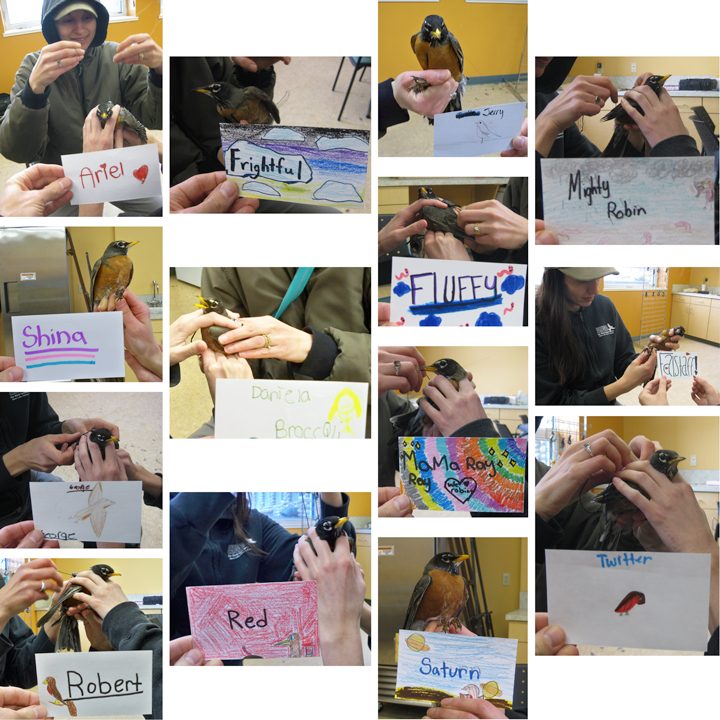 The robins and hermit thrush weren’t alone in exploring the snowy boreal forest. Plenty of Dark-eyed Juncos were out looking for food and we captured a Rusty Blackbird, Black-capped Chickadee, Fox Sparrow, and Sharp-shinned Hawk. The Rusty Blackbird also breeds in the boreal forest but is one of the most rapidly declining species in North America for reasons that are largely unknown. This particular Rusty Blackbird was the first one ever caught at the Boreal Centre! The Sharp-shinned Hawk follows a similar migration pattern to the robins. Although they are the smallest hawks in North America, they are fierce predators of the robins despite similar sizes. When we released the Sharp-shinned into the forest we learned why. As soon as we let her go, she quickly gained speed while navigating the dense thicket of willows.

Dark-eyed Junco tracks in the snow. 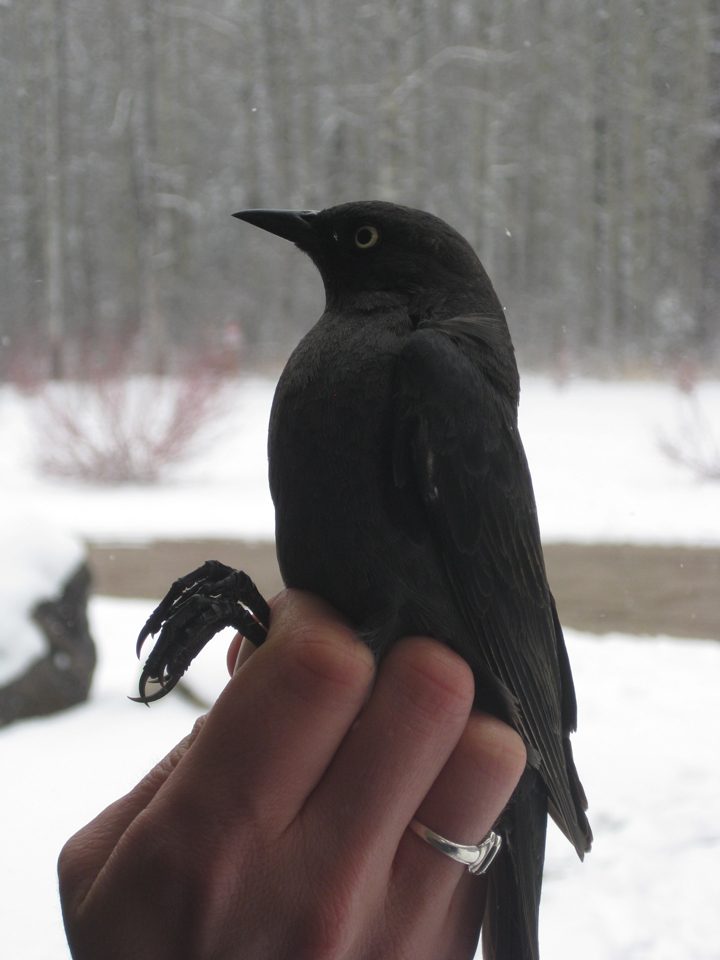 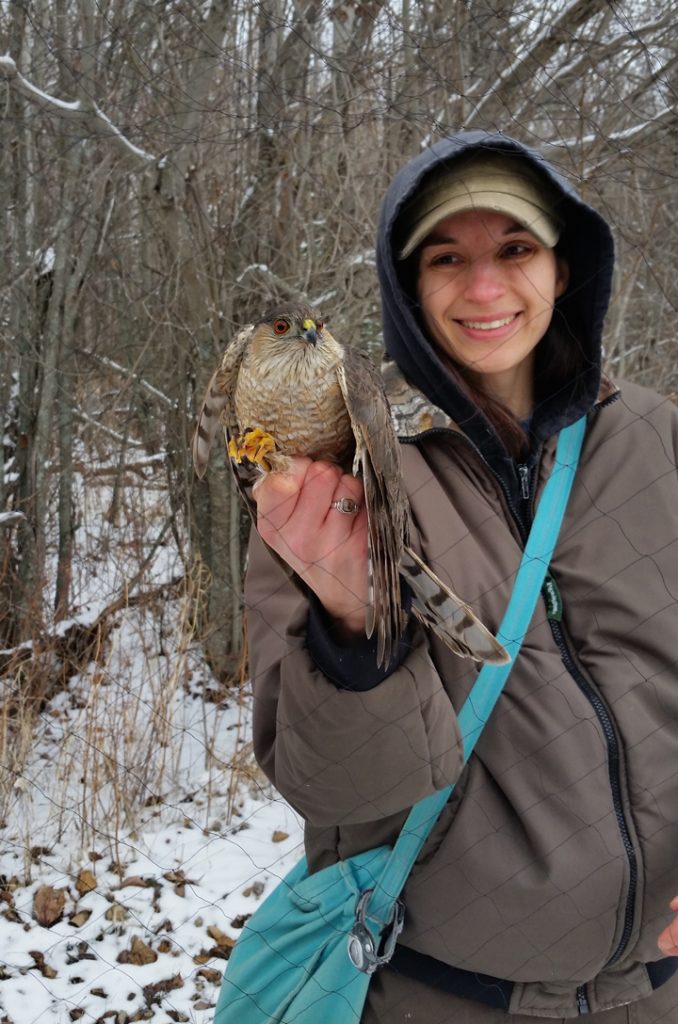 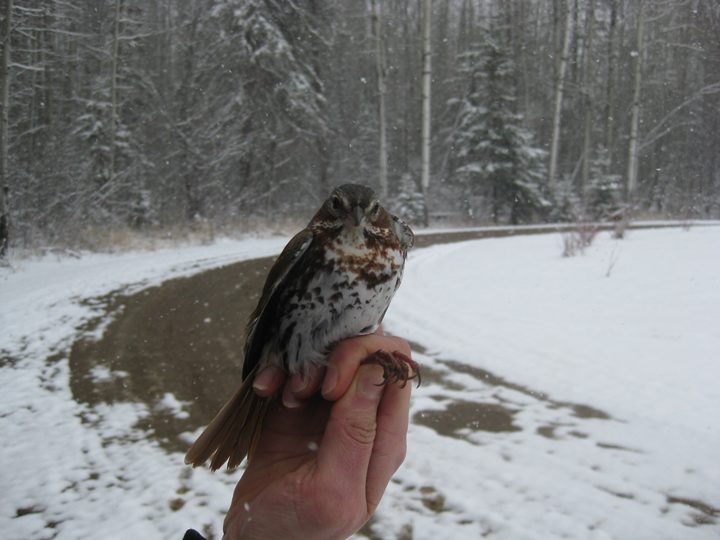 A walk in the snow revealed that I’m not the only one who uses the trails in the park. I found dog-like footprints in the snow and scat nearby, both of which were sure signs of a coyote. Can you guess what this coyote was eating? 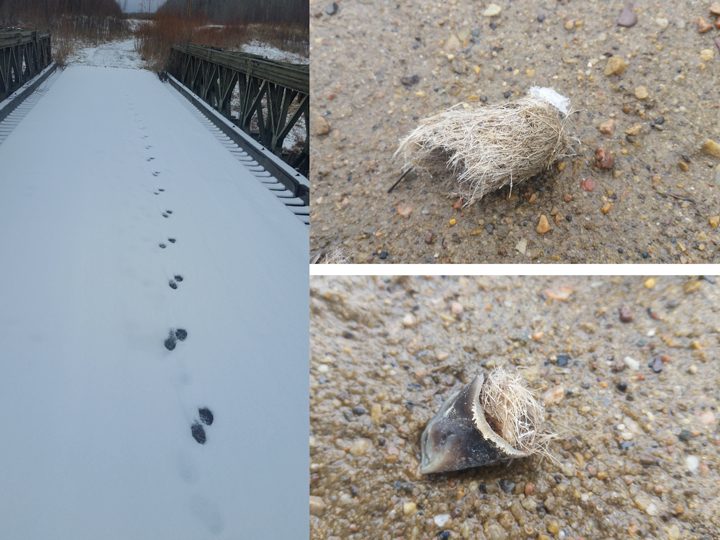 Coyote tracks (left) and scat (right). The scat is full of light-colored fur and part of a hoof. This coyote seems to have eaten at least part of a deer!

We currently have 21 Space Robins flying for us—check back as we find our final 9!

This entry was posted on Thursday, April 27th, 2017 at 2:50 pm and is filed under Arctic-Boreal Vulnerability Experiment (ABoVE). You can follow any responses to this entry through the RSS 2.0 feed. Both comments and pings are currently closed.

18 Responses to “A Flurry of Activity”