Back to Uncovering a Migration Mystery

We are back on the search for Space Robins to help us solve our migration mystery! Remember, last year we set out to track American robins migrating through Canada and Alaska to understand where they go and why. Check out our first post from last year to learn more about the project in general. With the help of our friends Nicole and Richard Krikun of the Lesser Slave Lake Bird Observatory and Boreal Centre for Bird Conservation and mini-GPS units from Lotek, we successfully followed fifteen robins to their breeding grounds. Check out the map below to see where our Space Robins went! 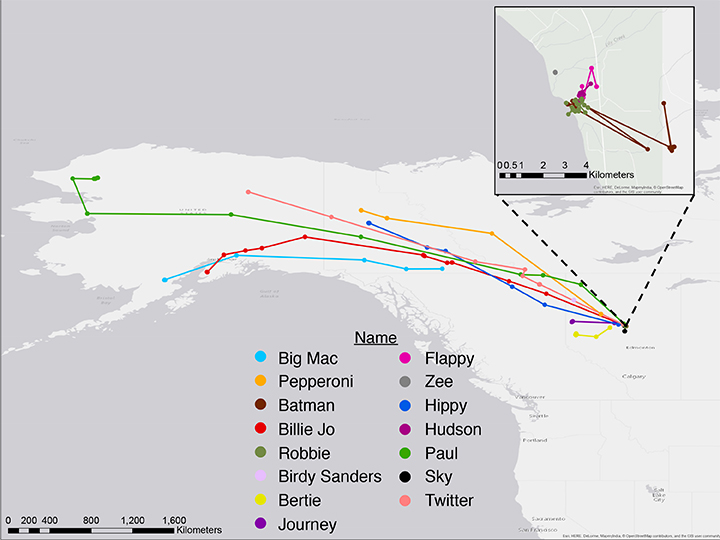 This year, our team of researchers has changed a bit. I’m Ruthie, a student at Columbia University and the Lamont-Doherty Earth Observatory working on my Ph.D. in the Department of Earth and Environmental Sciences. My friends, and birding experts, Nicole and Richard will be helping me again. But this year my mom Kitty, a bird enthusiast, will be tagging along. 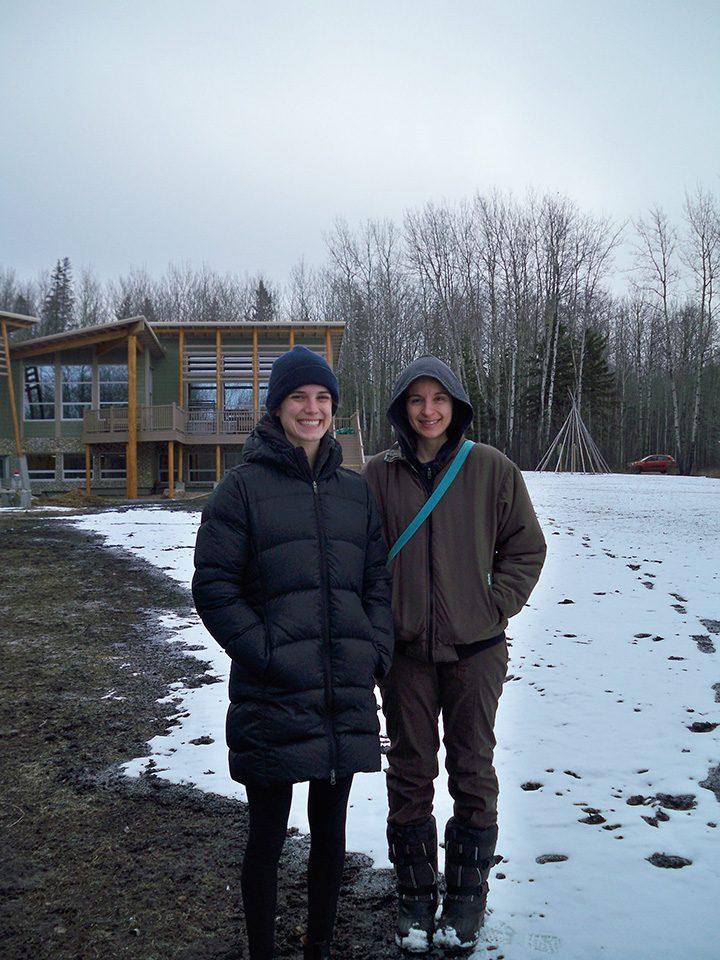 Ruthie Oliver and Nicole Krikun in front of a snowy Boreal Centre. 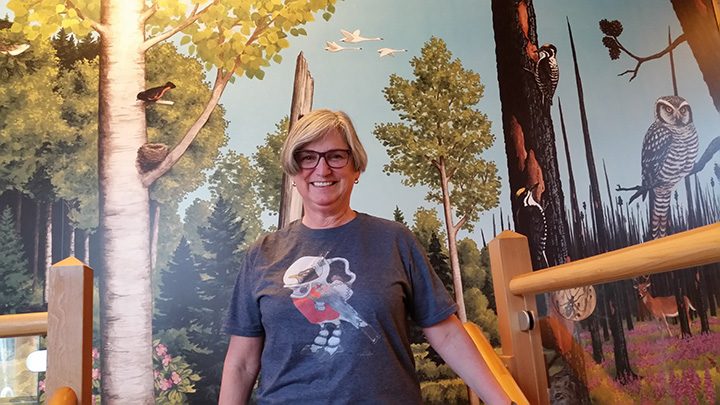 You are what you eat…

If you notice on the map of our robins from last year, we know where they ended their journey, but we don’t know where they started. Because of this we don’t know which robin actually traveled the farthest. Another migration mystery! Do you have any guesses on where the robins might be coming from? Do you have any ideas how we might figure out where our robins spent the winter?

Remember the saying “you are what you eat”? It’s true! Foods that are grown in different places are different when you look at them very closely by studying the atoms that they’re made of. Atoms of the same element can weigh different amounts and are called isotopes. The amount of different isotopes found in a plant depends on the type of plant and where it was grown. The isotopes in plants show up in the feathers and toenails of robins. So this year, we will collect feathers and toenail clippings from our robins. By looking at the carbon and hydrogen isotopes of the feathers and toenail clippings, we will be able to learn about where our robins are coming from. Click here to learn more about isotopes.

Spring and snow in the boreal forest

Robins aren’t the only ones who are affected by the environment. When we landed in Edmonton, Alberta on Friday we were all set to drive 3 hours north the Boreal Centre. But a big snowstorm made the trip too difficult, so we had to wait for the weather to improve before completing our migration. As we waited in Edmonton, we could only imagine that the robins were probably hunkered down waiting out the storm too. The next day as we drove, we got a glimpse of what the boreal forest looks like in the winter. 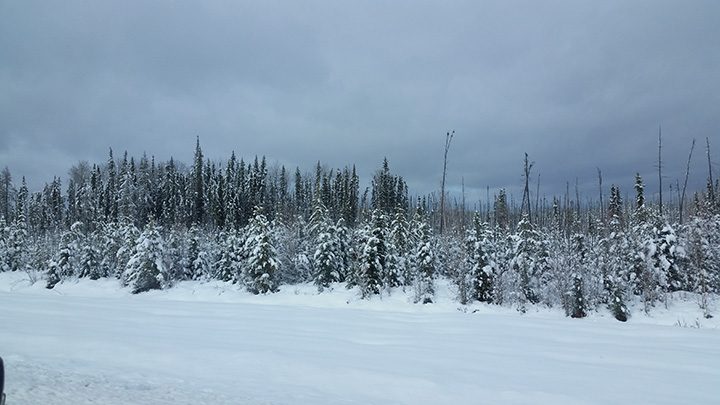 With snow on the ground and cold temperatures, we weren’t optimistic about catching many robins at the Boreal Centre very soon. While we waited we prepared our GPS backpacks. We wanted make sure they fit the robins, but we needed a robin to a measure on. Usually we don’t want to lure robins in with calls because birds that respond are likely to be breeding in the area and are no longer migrating. But since we just wanted to try out suiting up a Space Robin, we didn’t mind if it was living around here. So we downloaded robin calls to play through a speaker and set out a decoy stuffed bird. We got the attention of our local robin we had seen around, but before we knew it we had attracted quite a crowd! About two-dozen robins took to perching in the tree near our speaker to try to figure out who was singing. Because they were in such a big group, it seemed like they were most likely still migrating, but just taking a break in the snow. 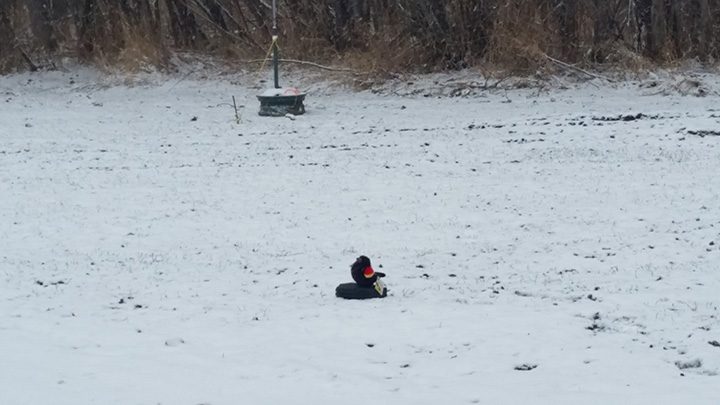 Waiting behind the nets for robins to come. 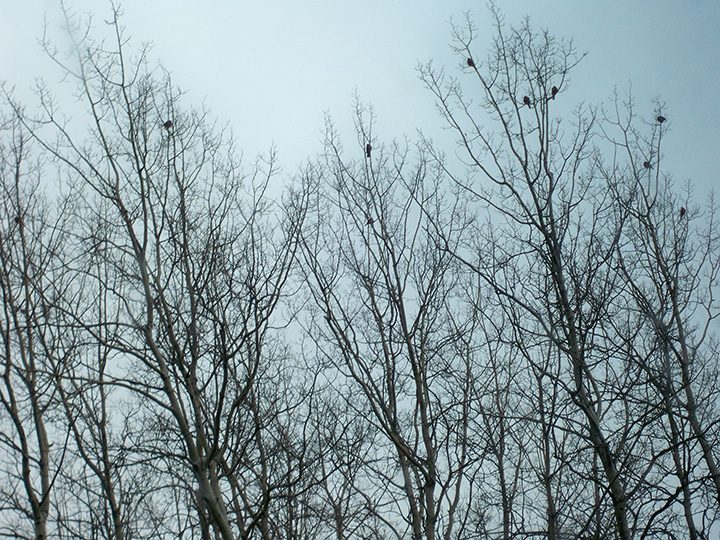 Robins coming over to check out what all the singing is about.

And that’s how we met our first two Space Robins—Dream and Lightning Guinea Pig!

Here’s how we suit up a Space Robin: 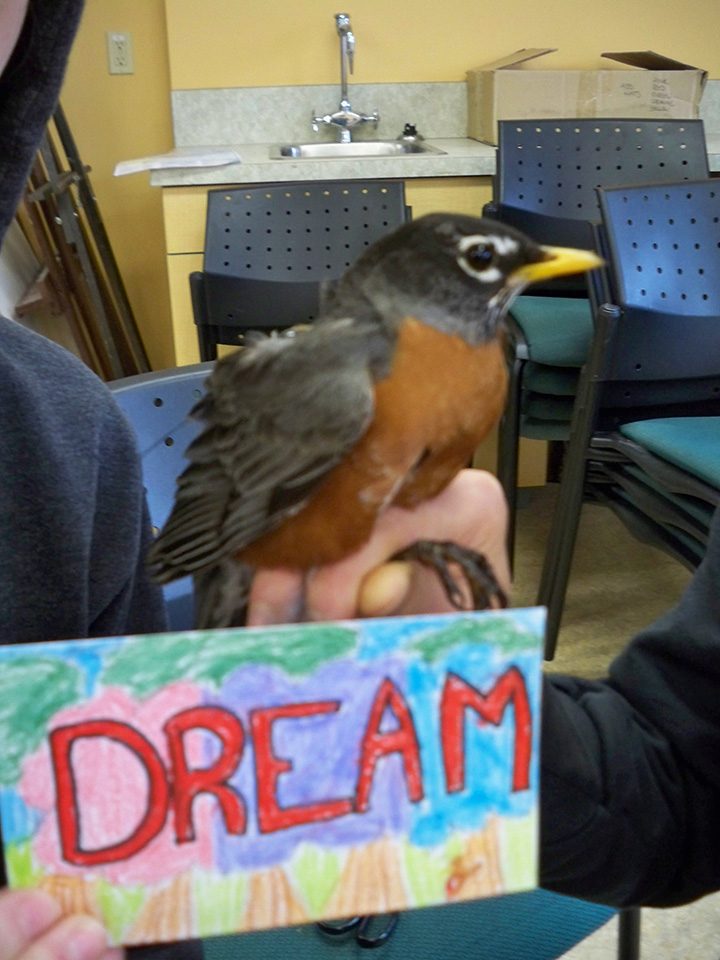 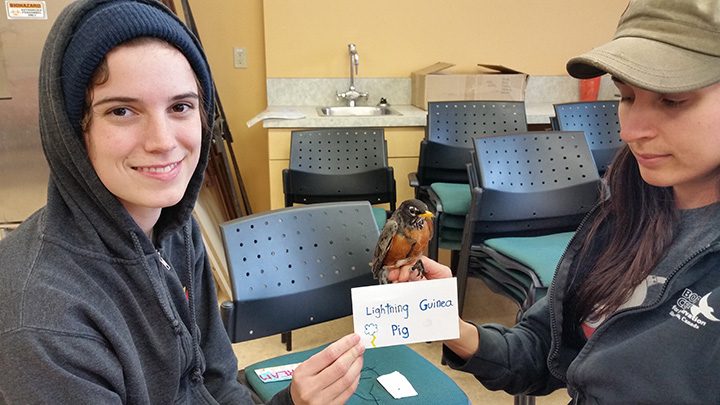 Check back here for updates as we find our next Space Robins! 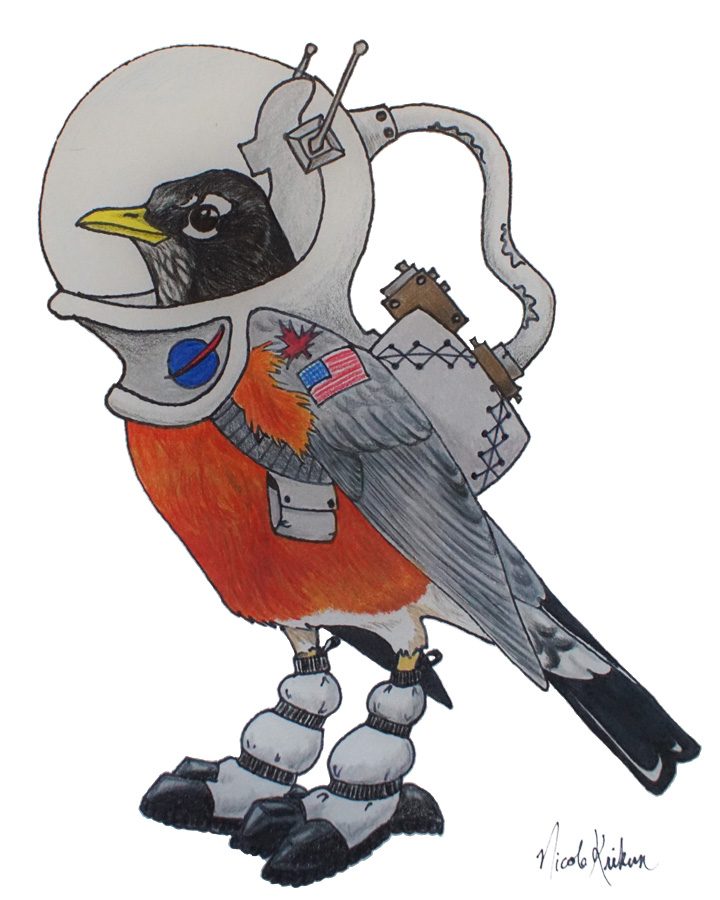 This entry was posted on Wednesday, April 19th, 2017 at 11:32 am and is filed under Arctic-Boreal Vulnerability Experiment (ABoVE). You can follow any responses to this entry through the RSS 2.0 feed. Both comments and pings are currently closed.

23 Responses to “Back to Uncovering a Migration Mystery”