The CYGNSS constellation was launched on 15 Dec 2016 and the eight spacecraft have been going through engineering commissioning, in which each of their subsystems is tested and adjusted for best performance. One important milestone was reached on 4 Jan 2017 when we made our “first light” science measurements. This happened the first time we turned on the science radar receiver on one of the spacecraft (Flight Model #3, or FM03 for short) while pointing our science antennas down at the Earth. The receiver measures the strength of GPS signals that are reflected from the ocean surface, from which we can figure out how rough the seas are and how windy it is. FM03 was just crossing over the eastern coastline of Brazil at the time. The thick straight line pointing out into the South Atlantic from Brazil in this picture shows where FM03 was heading when we turned on the radar. 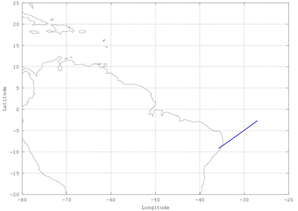 The CYGNSS radar measures four simultaneous GPS reflections that are spaced out around its sub-satellite point depending on where the GPS satellites are. Here are the first four measurements it made – our “first light” data.

The two measurements in the middle (labeled CH2 and CH3) are good examples of what GPS reflections from the ocean should look like when everything is working properly. The bright red spot should be right in the center if the radar receiver is properly tracking the GPS transmitters, the deep blue portion above the red spot should be uniform if the receiver noise floor is nice and stable, and the tapering “horseshoe shaped” region below the red spot should be shaped just the way it is if the radar’s signal processor is working right. There are literally thousands of things that all need to be just right for images like this to be generated, so it was amazing to see them appear the first time we tried. Of course, everything was not perfect. The measurement labeled CH1 (the one on the left) shows a much noisier and fainter ocean reflection. This was as a result of the radar incorrectly looking at the ocean through a weak portion of its antenna rather than the strong part that it should be using. It was caused by a software problem that we have since fixed. The CH4 measurement on the right looks like a single hot spot without the horseshoe shaped region below it because it is a reflection from land, not ocean (possible because we were right near the Brazilian coast at the time). This is exactly what land reflections should look like, so it is not a problem.

Next, all eight of the spaceraft will have their science radar receivers turned on and we will begin to look carefully at all of the data that will begin to flow. I’ll be reporting back soon on how it looks.

This entry was posted on Friday, March 10th, 2017 at 8:38 pm and is filed under Cyclone Global Navigation Satellite System (CYGNSS). You can follow any responses to this entry through the RSS 2.0 feed. Both comments and pings are currently closed.

One Response to ““First Light” Science Measurements by CYGNSS Satellite”