The sediment traps and the Wirewalker were recovered after three days of collecting data with a big surprise. Some parts were bent, and three out of the four collecting cylinders of the sediment traps were missing. The remaining trap was broken and unusable. One battery pack was lost, another damaged and the bungee had snapped. “What if we are not prepared for the North Pacific in winter?” thought Physical Oceanographer Melissa Omand. Colleen Durkin, Oceanographer, felt her confidence take a hit. Her team had deployed these instruments before, so she was not expecting anything to go wrong. She thought the big waves were the cause.

A fraction of a tooth found stuck in the line told a different story: the North Pacific was not to blame, but instead the instruments were damaged by a Great White Shark. This was certainly a rocky start for the team and a true testament to the unexpected challenges of conducting science at sea. 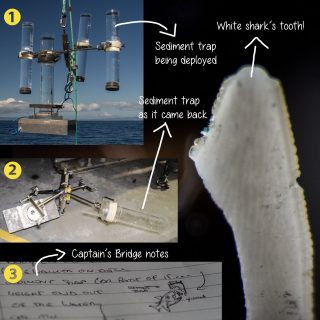 The Wirewalker came back up with more than just great data at the first station. Due to a tooth being embedded in the line, researchers presume a White Shark attacked the instrument. SOI/ Mónika Naranjo González

Amazingly, the data extracted from the nine sensors in the Wirewalker was complete. This provided new insights about the instrument’s resilience and capabilities. Even with ripped cables and a lost battery pack, it did not miss a beat and came back with an important discovery from Hawaiian waters: the team was excited to confirm a growth in the amount of particles during daytime, which was surprising for two reasons.

The first reason deals with the behaviour of phytoplankton itself. Confirming that that there is a variation in the amount of organisms found at day or night is key to make a complete characterization of the oceanic carbon cycle. Melissa, Colleen, and Biogeochemical Oceanographer Meg Estapa are studying the Carbon Pump: how particles sinking in the ocean drag carbon down to the depths of the ocean with them, removing carbon from the atmosphere. By learning about variations in the particles through time – as well as in different layers of the water column – scientists can better understand the physical mechanisms involved in particle distribution in the ocean. This also relates to the biochemical processes that the ocean controls.

The second surprise pertains to the Wirewalker and its capabilities. The instrument walks the 150 meter-long wire every seven minutes. A sensor in the walker emits light and then measures how much light bounces back after hitting particles suspended in the water. Counterintuitively, the smaller the particle, the more light it backscatters. The team already knew the Wirewalker would provide info about the particle’s sizes and density, but they did not expect that could also be used to measure community growth. The evident variation in the amount of light backscattered was an indicator of a change in the amount of particles suspended in the water. Other optical instruments confirmed the walker’s findings, which suggests that the Wirewalker could be useful to determine more measurements than previously thought.

This is a composite image containing the findings of one gel sediment trap, created from a series of photographs taken with a microscope. Within it, aggregates, fecal pellets, phytoplankton, zooplankton and other particles can be seen. Image credit: SOI/Melissa Omand

Not even a Great White could stop the team. Three stations and four weeks later, Colleen Durkin and Melissa Omand can barely contain their excitement when, for the first time, they watch the time-lapse photographs taken by a mobile phone deployed along with the Wirewalker. Playing the pictures as a sequence creates a minute-long movie: “This is the movie of your dreams!” exclaims Colleen, “We’re with them, seeing the things we’ve studied for so long.” This is a small victory, but one that Melissa will carry with her proudly when she walks away from Falkor. Her timelapse repurposed phone contraption works, providing new information about the subtle machinery that drives the carbon cycle, and even proving that the instruments work as intended: the movie shows that the particles falling into the gel traps are preserved in an optimal way. 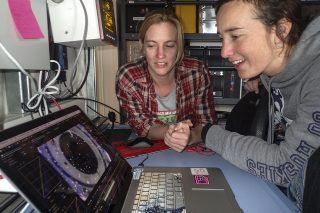 Colleen Durkin and Melissa Omand can barely contain their excitement when they watch for the first time a time-lapse movie created from the images taken every 2 seconds by a newly developed instrument. SOI/ Mónika Naranjo González

1750 liters of seawater filtered. 150,000 Flow Cam pictures, 810,000 Cytobot images, 361,200 meters of the ocean profiled. It will take months for the interdisciplinary team on board Falkor to be able to process all the data and then begin cross-referencing it, but some preliminary observations have been made.

Radiolarians are planktonic creatures that up until now have not received much attention when it comes to painting the ecological big picture of the Carbon Cycle. Recently, some articles showed some statistical significance, but offered no clues about the specific role played by them. Aggregates found in the sediment traps suggest that they actually play an important part in the carbon pump. Colleen Durkin suspects this will be an important result of the team’s research, filling in one more piece of the puzzle. “I’m sure other things will pop up as we process the samples,” she adds.

As the expedition approaches its end, Melissa’s question about preparation has been clearly answered: Falkor, the crew, the scientists, and the instruments were all ready to take on winter in the North Pacific. Nearing their return to shore, they are bringing back high-resolution imagery, tens of terabytes of data, and the successful testing of new state of the art technologies. 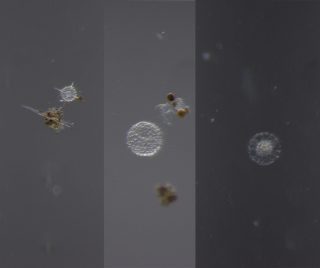 Radiolarian might not have received the attention they deserve up until now. The findings of some of the sediment traps suggest they play an important role in the Carbon Cycle.

This entry was posted on Saturday, February 18th, 2017 at 5:40 pm and is filed under Sea to Space Particle Investigation. You can follow any responses to this entry through the RSS 2.0 feed. Both comments and pings are currently closed.