Zen and the Art of Wirewalker Maintenance

I have sailed with my share of compelling characters since I began ocean research, and perhaps it is fitting that while we study ocean color aboard the R/V Falkor, I have had the pleasure of getting to know one of the most colorful. Kirsten Carlson has joined the cruise as an artist-in-residence, bringing her zany, insightful perspectives and boundless energy to coax us from our laptops. Last night she encouraged me to try out her Artscipaedia Plankton coloring booklet. That is right – plankton – as in the microscopic organisms that color the ocean… exactly what the scientists are studying onboard. As it turns out, Kirsten has a background in marine science, and is a self-described plankton rescuer!

While coloring, I found my thoughts drawn back to the instrumentation I had released over the side the day before. My Wirewalker and sedimentation traps were miles away from our ship, drifting in the open ocean, collecting data and doing their thing… I hoped. I decided to draw the Wirewalker instrument array. I have spent months preparing for this cruise – testing the sensors, communications, preparing the sediment tubes, and making sure each piece of hardware is accounted for. I discovered I knew it by heart. Kirsten shared her watercolor paper and we devised a plan to collaborate – I would draw and she would paint. I can’t recall finding such catharsis on a cruise before. As the rest of our science party started a movie in our de facto hang-out space – alibrary/office/lounge/video conference room that has quickly become the center of orbit onboard the ship – I did my best to dust off an artistic identity I’ve rarely assumed since I was a visual art major in in high school.

Beauty in Buoys and Shackles

Drawing the mundane but critical details of each linkage in the array, I newly appreciated the elegant design of the Wirewalker: a design evolution I had observed since shortly after its invention by Dr. Rob Pinkel’s group at Scripps Institution of Oceanography. The Wirewalker is assembled in distinct segments. At the top, is a GPS-tracked buoy, and beneath this hangs a 3/16” stranded wire that stretches 150 m beneath the surface. As the buoy tugs the wire up and down over the waves, the sensor-laden Wirewalker uses a simple cam mechanism to rectify the wave action into a one-way motion down the wire. When it reaches the bottom, it hits a stop and releases it’s grip, gliding freely along the wire to the surface. This cycle is repeated every 10 minutes or so, giving us a remarkable high resolution view into the physical and physiological variations of the plankton and particles in the upper ocean.

Having a professional artist on-board (in addition to a number of talented crew and fellow scientists) has been a unique experience and has inspired me to reconnect with my inner artist. As I write this, I only hope that our collaborative art is an homage, and not an obituary to my lonely Wirewalker adrift amongst the enormous waves of the wintery North Pacific Ocean. 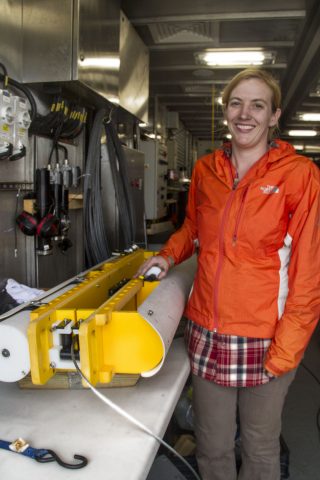 Melissa Omand will be working with Meg Estapa and Colleen Durkin to study the data collected by the Wirewalker’s assemble in order to understand Carbon Pump in these waters.

This entry was posted on Friday, February 3rd, 2017 at 9:09 am and is filed under Sea to Space Particle Investigation. You can follow any responses to this entry through the RSS 2.0 feed. Both comments and pings are currently closed.

One Response to “Zen and the Art of Wirewalker Maintenance”