Researchers in the Dry Lab are able to examine the most recent Virtual Reality simulations created from holographic photos taken in each CTD cast. With this experience, it is clear that every single drop of water in the ocean contains huge amounts of life. Microscopic organisms constantly carry out processes that maintain the atmosphere, air, food webs, and life as we know them. Yet humans are changing things quickly, and we do not have enough knowledge to determine what our future world may look like. Hugo Berthelot, biogeochemical oceanographer, is on Falkor to fill in some of the blanks. 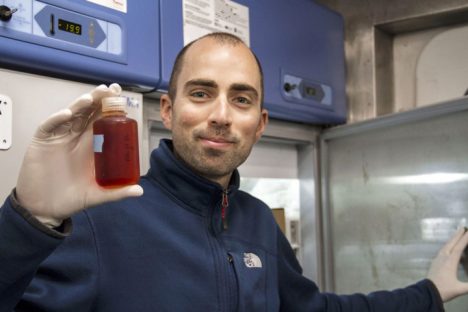 Hugo Berthelot, biogeochemical oceanographer, is on Falkor studying phytoplankton organisms and the biochemical processes they take part in.

Who is Doing What?

One crucial aspect of microbial communities that researchers want to understand can be summed up in the cheeky question “Who is doing what?” This is important to understand because of the delicate connections between all marine and terrestrial life, granting us a start to inferring the microscopic “winners” and “losers” in the face of Climate Change.

To do so, Hugo is studying the Nitrogen Cycle. Nitrogen is a key nutrient at the very base of the food chain, both on land and in the ocean. Its availability directly impacts the global marine ecosystem. Many microorganisms feast, grow, and live off of it. Once the microorganisms reach a certain size (or die), they will sink, dragging carbon – in the shape of organic matter – down with them. Once carbon leaves the superficial layers of the ocean and enters deep waters, it will be gone for thousands or even millions of years. As it stands today, a healthy functioning carbon sink is probably good news. This carbon pump has been working for thousands of years, helping regulate the Earth’s chemistry and temperature.

Understanding how available Nitrogen is for microbes to feed on, along with how different organisms are able to transform Nitrogen after they have ingested it, directly relates to the inner-workings of the biological carbon pump, Hugo’s main focus of research. He will collect water samples in very different geographical locations and weather conditions as Falkor sails from Hawaii to Portland, Oregon.

Phytoplankton is very, very small. Studying which microscopic organisms transform an invisible gas (such as Nitrogen) and their rates at doing so is extremely challenging. Therefore, Hugo utilizes a special technology called nanoSIMS, but before he gets to that point, he must follow certain steps.

Using an incubator, Hugo Berthelot enriches the water with Nitrogen and exposes the microorganisms to this environment for 24 hours, to later assess how much Nitrogen each cell consumed.

He first collects water samples from the surface and from Niskin bottles deployed in CTD casts at the Deep Chlorophyll Maximum depth of 150 meters. The, using an incubator, he enriches the water with a stable form of Nitrogen (N15) while maintaining the microbial communities natural conditions, including light and temperature. After a day of incubation, he filters the water and freezes the samples, hence preserving each organism. Once back ashore, flow cytometry cell sorting will enable him to identify each kind of cell and sort them into taxonomic groups. Then nanoSIMS technology will detect the amount of N15 consumed by each cell. After months of rigorous and complex analysis, Hugo will be closer to understanding which organisms are carrying out certain chemical processes, as well as which ones are likely to benefit from changes in global climate. 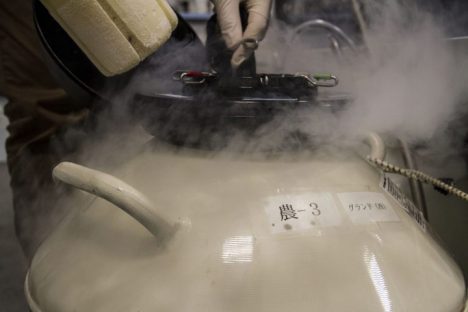 Hugo freezes the filtered samples using liquid Nitrogen. After leaving Falkor, he will analyze the cells to understand which chemical processes each one carries out and how they responded to the incubator experiment.

Every microorganism specializes in one single task, transforming one chemical element into another and fuelling our planet’s biochemical system. Therefore, changes in microbial populations will inevitably affect Earth’s chemistry. Once the snowball of a changing climate has begun rolling, it will trigger other factors – such as changes in oceanic microscopic ecology – which will in turn add to the snowball’s speed and impact. Figuring out what life inside a drop of seawater may look like in the future is essential knowledge for researchers to understand what the future may hold.

This entry was posted on Thursday, February 2nd, 2017 at 11:38 am and is filed under Sea to Space Particle Investigation. You can follow any responses to this entry through the RSS 2.0 feed. Both comments and pings are currently closed.