It’s Friday, and the excitement of launch day yesterday still hasn’t worn off. Not only did we see CYGNSS get launched into space, we were also able to make first contact with them. I talked about the excitement of the launch itself yesterday, so today’s post will describe our experiences communicating with each of the eight satellites for the first time.

First, I want to remind you of what our spacecraft looked like, all bundled up and stacked on the deployment module: 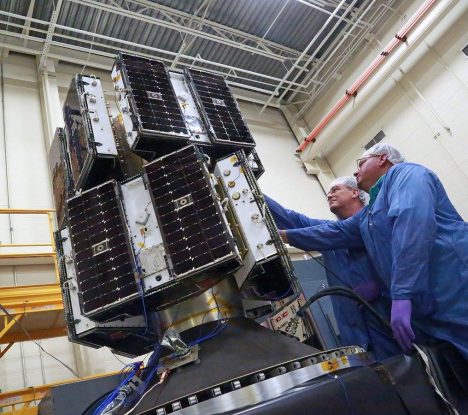 All eight spacecraft, with their solar panel wings stowed, attached to the deployment module eventually contained in the Pegasus XL launch vehicle.

Once it reached the right altitude, the deployment module pushed pairs of satellites off in different directions. A little while after being deployed, the spacecraft solar power panel wings unfolded, and the spacecraft went into “sun point” mode, which is exactly what it sounds like: the spacecraft maneuvered to get their solar panels pointed directly towards the sun for maximum charging. This sequence of events is illustrated in this artist representation of the deployment sequence: 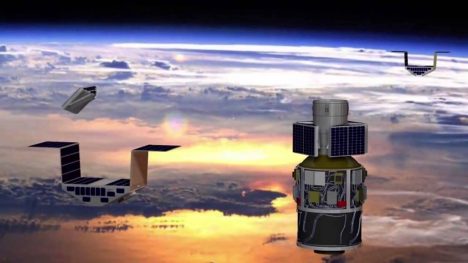 During deployment, the spacecraft are pushed off the deployment module to start their solo orbits. The solar panel wings unfurl after the satellite is deployed.

After launch, we needed these satellites to start charging their batteries as soon as possible, via the solar panels. Although we only need six working satellites to meet our science requirements, we’re always chasing perfection. At 11 AM EST, we all gathered in a conference room to take a look at the first engineering data coming down from the satellites.

We weren’t the only ones looking at the data, however. CYGNSS team members at Southwest Research Institute’s Mission Operations Center (MOC) in Boulder, CO are operating 24/7 to monitor engineering data we get from the satellites, as well as set up communications with the satellites via our ground stations in Hawaii, Chile, and Australia. At the MOC, they were sending commands and planning out the communication timeline, depending on the scenario we ran into.

What you might not remember is that initially after deployment, the satellites are still pretty close to each other while orbiting. This makes it challenging to talk to more than one or two satellites at a time when they are in our contact zones. We had a detailed plan that included a timeline for which satellites were going to be communicated with, when, and from which ground station. Contacting all eight satellites would take all day—a day that started at 2 o’clock in the morning for some of us!

The second exciting moment of the day was seeing the engineering data come down from the first satellite we contacted. The conference room was tense and dead silent at 11:40 AM EST, 2 minutes before first contact. I could hear everyone’s watches tick. When the first data showed up on the screen, we all breathed a sigh of relief. All the engineering data looked good! We relaxed a bit after that.

As the day went on, we contacted more and more satellites. While others exchanged horror stories they had experienced during previous missions during the first day, we tried to hope for the best. We were nervous and hesitant to declare success until we had thoroughly analyzed the limited data we had. It was fascinating to see how engineers could connect the dots between the temperatures of different parts of the spacecraft and things like the orientation and motion of the spacecraft with respect to the sun.

After successfully contacting all eight spacecraft by 3:30pm EST, we still weren’t completely sure whether one satellite had stabilized in sun point mode, but there wasn’t much that those in the conference room could do about it. We had to let the folks in the MOC work their magic. And work their magic they did! Overnight, all eight satellites were declared “green.” It sure was nice waking up to that news.

Over the coming weeks, the engineering commissioning phase will proceed. The folks at the MOC will be busy, even though it’s nearing the holidays. Prof. Ruf, currently at the MOC, sent me a few photos of all the action earlier today. 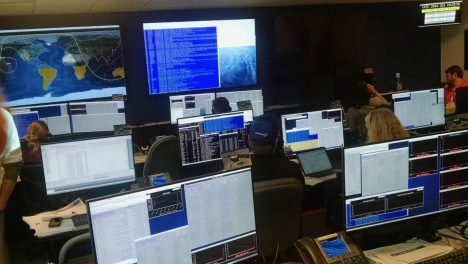 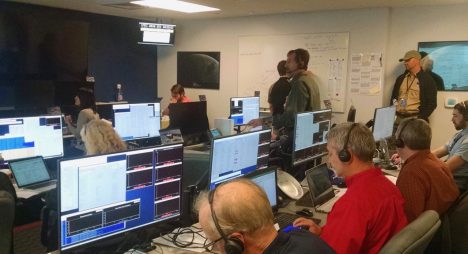 The MOC team hard at work pouring over initial engineering data from the spacecraft on December 16, 2016. Photo credit: Chris Ruf

According to Prof. Ruf, as of 5:00pm EST, things were still going smoothly. We all hope things continue to go well over the coming days and weeks before we go into science operations mode.

This entry was posted on Friday, December 16th, 2016 at 10:22 pm and is filed under Cyclone Global Navigation Satellite System (CYGNSS). You can follow any responses to this entry through the RSS 2.0 feed. Both comments and pings are currently closed.

2 Responses to “First Contact Made with CYGNSS Satellites on Orbit”