A Flight, a Sunset and a Traditional Namibian Braai

Field campaigns are hectic. Everyone is always thinking ahead to the next flight, rarely taking the opportunity to experience the, often times, incredible location they are operating from.

ORACLES has been no exception. On September 10, the ER-2 joined the P-3 in the sky, measuring aerosols and clouds from above. Since then, it has been a mad race to the finish: planning flights, analyzing data, fixing instruments, deliberating over last-minute plan changes, coordinating spatial coincidences between the planes mid-flight.

On flight days the ER-2 (the plane that the instrument – AirMSPI – that I work with, is on) has a “hands-on” call before the sun comes up. Meanwhile, the principal investigators spend 30 minutes discussing whether the plan they spent hours devising the day before will hold up in the face of an unpredictable environment. At 6 a.m. (or thereabouts) there’s a call with the pilots where we discuss the plan for the day, and then the pilot is off to prepare for a long day. The aircraft is towed out to the tarmac and, eventually, around 9 a.m. the plane – complete with a pilot in a spacesuit – is off for a full day of science-ing. 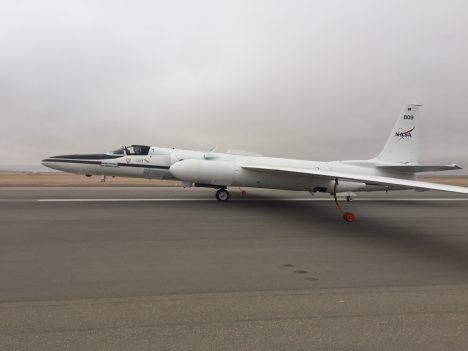 The ER-2 aircraft preparing for a flight, as seen from the “chase car”. Credit: Mike Tosca.

In addition to all of the above, we’ve also been mentoring an exceptional group of seven Namibian and South African interns. Their eagerness to learn has been inspiring. Life-affirming is hardly a strong enough word to describe how the experience has affected me. 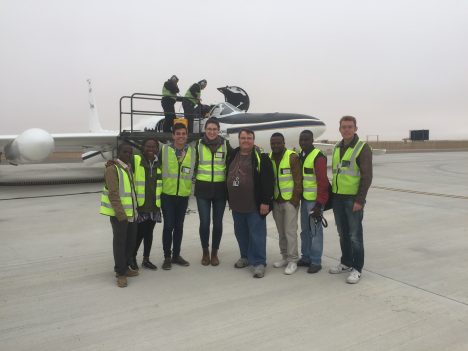 Amidst all of the commotion, the stress, the anxiety, the data-crunching, the ever-elusive “hard down day” appears out of the ether, a seeming ray of light emerging from an overcast Swakopmund sky. Monday, September 19 was one of those days. And it proved to be one of those ephemeral times when the hard working scientists were able to explore a bit of the region of the world they have called home for four weeks.

We all were treated to a truly Namibian experience. One of our amazing interns took us to “the location”- a suburb of Swakopmund where the paved roads and German-inspired buildings of the town center gradually morph into smaller residential dwellings and dusty streets on their way toward the vast Namib desert. Children play in the streets, music echoes out of lively bars, neighbors laugh and talk together over their fences. We all shared a traditional Namibian meal of Namibian chicken, tripe, spinach, “pap”, smashed beans, Windhoek beers, and of course, a delicious “braai” (a Namibian and South African type of barbecue) at the accommodating Hafeni Restaurant. The braai was even cooked by hand by our intern Ismael in the backyard of the restaurant. Suffice to say, our tummies were very satisfied at the end of the day.

A group of hungry scientists outside Hafeni Restaurant in the Mondesa neighborhood of Swakopmund. Credit: restaurant staff 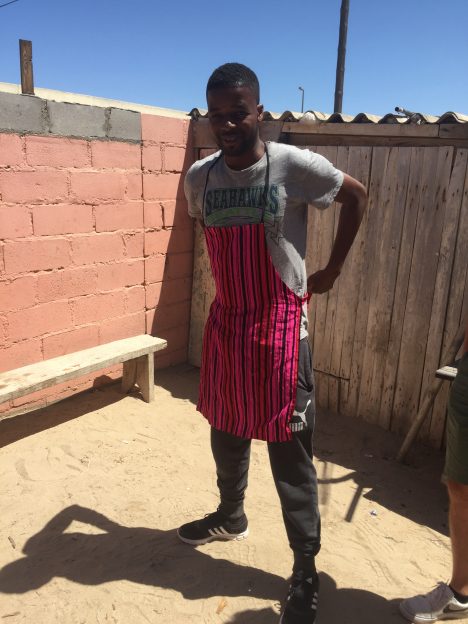 It was one of those experiences I’ll never forget. Kind of like the sunset every night over the Atlantic Ocean from Swakopmund Beach. Or being one of the first people to see the imagery that our remote-sensing instrument has collected from the previous day’s flight. 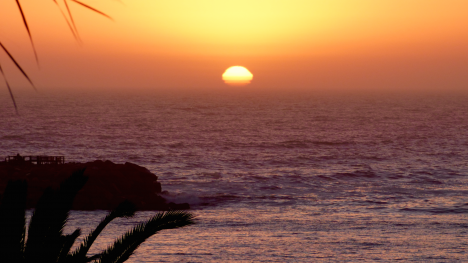 A dusty, smokey, sunset over the Atlantic Ocean from the Namibian coast. Credit: Mike Tosca

This entry was posted on Tuesday, September 20th, 2016 at 4:35 pm and is filed under ORACLES. You can follow any responses to this entry through the RSS 2.0 feed. Both comments and pings are currently closed.