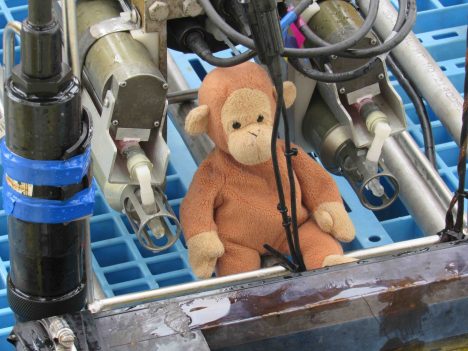 One of the challenges of oceanography (and many other sciences) is telling a coherent story of the environment across a vast space of space and time scales. For example, cosmologists tell the story of the universe from subatomic particles to the breath of the visible universe and from first nanoseconds of the big bang to billions of light years.

For SPURS-2, mixing is obviously an important factor in telling the story of how rainwater combines with seawater to bring about the east Pacific fresh pool that we see from space. That mixing primarily happens in the upper ocean at scales of centimeters, where turbulence is caused by phenomena  such as wave breaking, current shears, convection in unstable layers, and the rain itself hitting the sea surface. In order to understand the big picture, we need to estimate the magnitude and location of the centimeter scale turbulent mixing.

Over many decades oceanographers have become quite adept at estimating mixing from measurements of centimeter scale temperature, salinity, and velocity variations – otherwise known as microstructure. Now, along with our standard instruments for measuring temperature and salinity, we also deploy microstructure probes – very fast sampling sensors of ocean variables.

It is beyond the scope of this blog to explain how microstructure measurements are transformed into ocean mixing estimates, but it is one of the more helpful developments in modern oceanography. 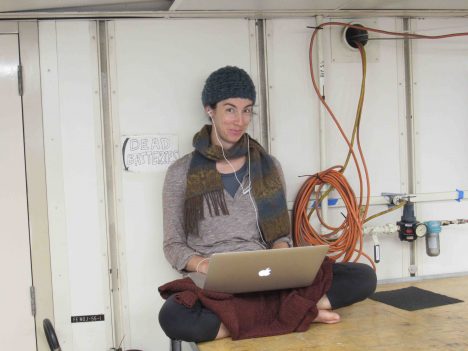 Caitlin Whalen, working on her review article for the Bulletin of the American Meteorological Society.

Caitlin Whalen of the University of Washington Applied Physics Laboratory (APL) is an expert in ocean mixing. While on the SPURS-2 expedition, she has contributed to a review paper on the subject for the Bulletin of the American Meteorological Society. During SPURS-2 she oversaw the addition of the Seagliders to the Lagrangian experiment.

The Seagliders will provide us with a picture of how the turbulence in the SPURS-2 region varies at deeper depths and over a longer time period than we will learn form our ship-based measurements. Over the next six months the Seagliders will repeatedly travel between the ocean surface and a depth of one kilometer, collecting data during each trip. From this data we will be able to determine how the turbulence in the ocean varies with depth and how it is related to other events such as heavy rain and the continuously changing density patterns of the water. Knowing where and when turbulence occurs will help us understand how the fresh rainwater eventually mixes deep into the salty ocean.

Kyla Drushka and Suneil Iyer, also from APL, have deployed microstructure probes on the Surface Salinity Profiler (SSP). They will try to determine, from these measurements and the vertical structure of salinity in the upper meter of the ocean, how quickly rain-formed low salinity lenses are mixed into the upper ocean during individual events. Their big challenge during SPURS-2 has been to get a snapshot of salinity lenses at various stages of their lifetime. Being in the right place (low wind conditions) at the right time (just as rain begins to fall) with the right gear (SSP) actually deployed has been challenging. Still, I am sure we have collected more such data this expedition than previously existed. Finally enough data to find great exemplars for discussion in the scientific community! This is a wonderfully “fresh” topic for a graduate student like Suneil to tackle. 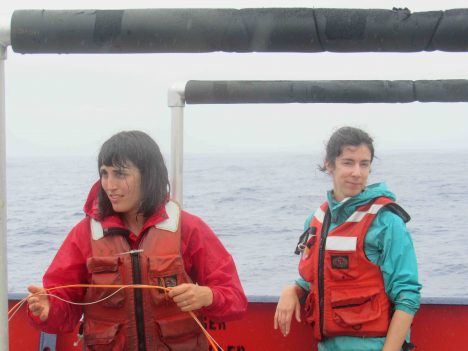 Kyla Drushka and Caitlin Whalen from APL, hard at work in the rain.

This entry was posted on Monday, September 19th, 2016 at 11:34 am and is filed under Salinity Processes in the Upper Ocean Regional Study (SPURS). You can follow any responses to this entry through the RSS 2.0 feed. Both comments and pings are currently closed.