Traveling the Length of the Atlantic Ocean, Part 2: Greenland!

I have always wanted to visit Greenland, the “ground zero” for climate change. Its ice cap rises more than 3,200 meters (2 miles!) above sea level and it holds so much ice that if it all melted, the height of sea level would rise by 7 meters (23 feet). The landscape is stark and inhospitable for most plants and animals. Greenland’s location makes it very sensitive to climate change, and it has a dynamic geological history as a result. It is undergoing rapid change now, as shown in the chart below. Greenland is “ground zero” for climate change. 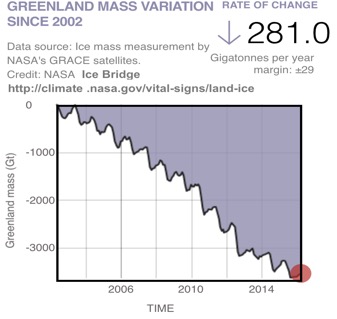 The loss of ice mass by the Greenland Ice Sheet from 2002 to 2015, measured by NASA’s Gravity Recovery and Climate Experiment (GRACE) and by the DC8 in NASA’s Operation IceBridge. Each gigaton of ice lost adds about 1 cubic kilometer of water to the oceans. The ice sheet has lost significant mass every year since measurements began in 2002.

For our flight to Greenland, the DC8 took off from Lajes air base in the Açores and headed directly to the ice sheet, traversing its length along the western edge. Our destination was the Canadian scientific base at Eureka (80o N), off the northern coast on Ellesmere Island’s Fosheim Peninsula. Instruments at this station record the total amount of greenhouse gases and pollutants between the Earth’s surface and the Sun. Our goal was to measure these gases at each altitude in the atmosphere, in order to check the accuracy of these data. We would then head south and land at Kangerlussuaq, on Greenland’s west coast.

The ice cap was mostly covered in clouds until we reached the northern part of Greenland. When we saw the ice surface, it showed many dark features, including melt ponds and dark hills, especially at the edge of the ice sheet. 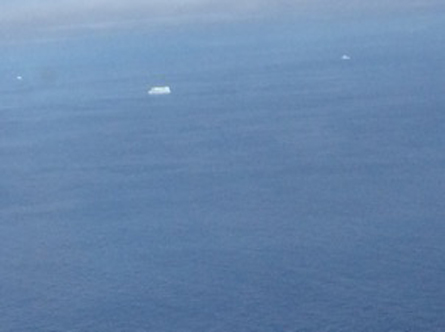 A lonely iceberg floats off the eastern coast of Ellesmere Island, Canada. Satellite data show that areas around Ellesmere Island that formerly retained floating ice all year round are now ice free, like the waters in this image.

While flying over Ellesmere Island, I snapped a photo that dramatically illustrates how dark surfaces put heat into the atmosphere. The picture shows currents of air being warmed by dark, ice-free rock, rising up along the slopes of small hills and producing the little cloud right at the top of each one. This is the way that heat absorbed by the rocky surface is distributed throughout the lowest layer of the atmosphere.

The rocky hills of Ellesmere Island absorb energy from sunlight and from heat radiated by the atmosphere (“longwave radiation”). This unusual photo shows the warm, dark rocky surface heating the air, causing warm plumes to rise and forming small cloud caps over each hill. The process efficiently transfers heat from the surface to the atmosphere (Photo: Steve Wofsy).

When we flew out over the sea, we could see that the waters off shore were almost completely free of ice. Occasionally we saw a few icebergs, or small amounts of ice near shore, but otherwise we saw very little floating ice.

The floating ice in the Arctic does not store a great mass of water like the Greenland’s land-based ice sheet, but it does have a very strong influence on regional climate. When the ATom mission started in early August, we flew over the Beaufort Sea north of Alaska, up to 80oN, and saw ice floes covered with dark melt ponds and interspersed with dark areas of open water. Ice started to break up in this area especially early this year, and with all that dark water absorbing heat from the sun and from the atmosphere, I wondered if most of the Beaufort Sea might become ice free by summer’s end. Now we were back!

Satellite data show that the Arctic Ocean did not lose all of its ice. But the Beaufort Sea did lose its floating ice, as far north as 75o N, and 30 to 70% was lost at 80oN. Water temperatures became quite warm off the Arctic coast of Alaska, maybe just about swimmable for a New Englander like me (5 – 10 C, 40 – 50 F). This large expanse of warm water will tend to make the fall season warmer and provide more snowfall in the Arctic than in former times, when the ice persisted more extensively on the ocean surface. The loss of floating ice amplifies itself, a process called “positive feedback.” As open water and melt ponds cover more area, the ice and surrounding water absorb more energy, leading to more ice loss, more energy absorbed, etc.

This year the overall loss of floating ice was among the greatest ever observed, although it did not quite match the record set in 2012. Indeed, as we were flying over Ellesmere, the large luxury cruise ship Crystal Serenity was reportedly starting the first crossing of the fabled Northwest Passage by a ship of its type, with 1000 paying passengers.

I also photographed the calving edge of a huge tidewater glacier, where huge pieces of ice (bigger than a football field, weighing 1 million tons or more) break off the glacier and drop into the sea. In this picture, you can see how dark the surface of the glacier has become as it travels to the sea, in contrast to the clean blue ice below. The darkening accelerates the melting of the glacier; it is due to deposition of some of the pollutants (soot) that we measure, and also to algae that grow on the ice. Scientists don’t yet know how much of this dark material is “natural” versus human-caused, and they are studying the ice to understand how much darkening is caused by deposition in the form of soot from fires or by pollution-related nutrients that stimulate the growth of algae. 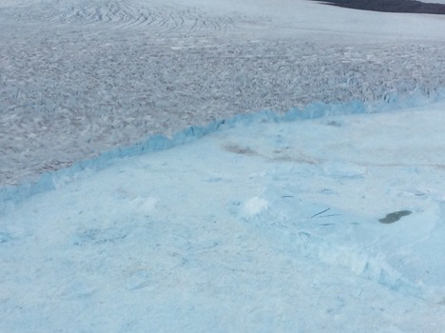 The end of the line: calving front of a tidewater glacier in western Greenland. As ice flows down from the Greenland ice cap to the sea, the surface darkens due to deposition of atmospheric pollutants and growth of algae. The picture shows the boundary where the moving glacier enters the ocean. Huge pieces of ice break off (“calving”) the leading edge and drop into the water—the origin of icebergs. (Photo: Steve Wofsy)

After flying over Eureka and the west coast of Greenland, we landed in Kangerlussuaq, just a short distance south of the Arctic Circle.  The area around Kangerlussuaq is stark and beautiful. The town is very reminiscent of many communities across the Arctic. It lies in the midst of a deglaciated area of bare rock mountains and a thin layer of tundra, in a lovely fjord. The river roars like a freight train as it goes under the bridge, carrying meltwater from the ice cap to the sea. The weather was very warm and dry. My afternoon run was interrupted by an encounter with a musk ox. The Sunday dinner at the Boat Club may have been the best of my month long trip around the world, featuring at least eight types of smoked or cured fish. This country is really breathtaking. But it was also a rather sad place, very, very quiet, with dozens of buildings left empty after the closing of the extensive military facilities when the Cold War ended, and the summer had been much warmer than average, drying up soils and plants.

After two days in Kangerlussuaq, we set out for home across Arctic Canada, arriving for a brief overnight in Minneapolis. We stayed at a hotel just across the road from the Mall of America, a vast place with reportedly 30-40 million visitors per year. The contrast with Kangerlussuaq was very dramatic—scenery, culture, sounds, smells, climate, air quality.

This transition was in many ways so typical of the ATom experience, and ATom science. We went from the high desert, with its fires and searing heat, directly to the floating ice near the North Pole, then Hawaii and American Samoa in the subtropics, then suddenly to winter in New Zealand and Chile, back to the subtropics on Ascension Island and the Açores (Portugal), and then again to a land of ice caps and glaciers in Greenland – all in the space of three weeks.

We measured the chemicals in the atmosphere, from bottom to top and along the whole route, and all in the space of just over three weeks. We saw some stunningly dirty air even in the middle of the ocean, in the subtropics and in the Arctic, with a lot of pollution coming from biomass fires, and also some very clean air. Our instruments are extremely sensitive, though, and in even the remote region of the Antarctic polar vortex, we appear to have detected traces of pollution.

After traveling on the DC8 across both the Atlantic and the Pacific, the world seemed smaller than ever before, and the atmosphere, not at all infinite or inexhaustible.

The goal of ATom is to learn about how the most remote parts of the atmosphere are affected by pollutants emitted on land. We have a lot to work with! It will take months to analyze our data and really understand what we have measured, and to assess what we have learned about humanity’s impact on air quality and climate. We also have a lot of memories and impressions (and some sleep to catch up on). I know it will take me months, or years, to fully process what I have experienced and, along with the wonderful ATom team, to extract the quantitative scientific information we need to understand the environment. 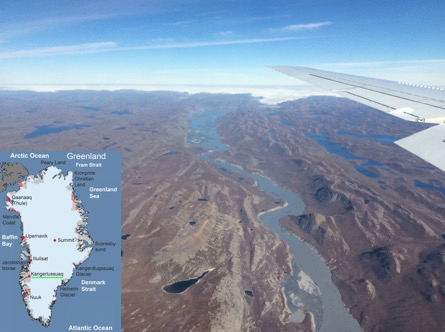 This image shows a deglaciated region in western Greenland, with the ice cap in the background. (Inset: Map of Greenland, showing location of our landing site at Kangerlussuaq at 67o N, 50.7 W). According to Richard Alley of Penn State University, this area around Kangerlussuaq was deglaciated at the end of the last ice age, 8-10,000 years ago, but ice returned and scraped the ridges bare during the Little Ice Age, a period between about 1300 and 1870 AD during which Europe and North America had colder winters than in the 20th century. 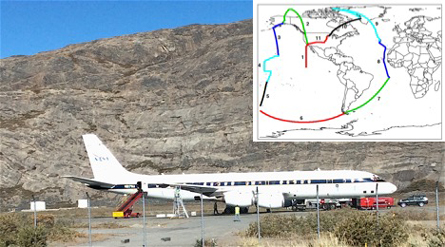 The NASA DC8 Flying Laboratory in Kangerlussuaq, Greenland. Inset: Our flight paths during ATom-1. We overnighted in 11 different time zones at 10 sites (one clock shift) in 23 days, covering 65,000 km (40,500 mi, equal to 1.6 times around the earth). We made 160 vertical soundings, and measured more than 300 chemical and aerosol parameters.

This entry was posted on Wednesday, August 31st, 2016 at 3:56 pm and is filed under ATom: World Survey of the Atmosphere. You can follow any responses to this entry through the RSS 2.0 feed. Both comments and pings are currently closed.

5 Responses to “Traveling the Length of the Atlantic Ocean, Part 2: Greenland!”