As we prepare for our last flight in ATom-1, I’ve been reflecting on what I should do differently next time around as we begin preparation for ATom-2, which will start uploading in December 2016 for flights starting in January 2017.

I’m a bit of a girly girl who likes her comforts. But after hauling bags for miles as we get on and off the aircraft, I’m seriously considering becoming a minimalist! The weight of the instrument laptop seems to have increased as the project has gone on, so what I consider “essential” for each stop has been streamlined to a very short list! Washing clothes has also proved easier than I thought so I could have managed with less clothes (I can’t believe I’m admitting that!) but I did wear everything I brought at some stage so nothing was a waste of space. In fact, the list of things I wish I had brought is quite short: my hiking boots! I had assumed that taking off from and landing into warm areas meant I could wear light clothes – which was true (to a point). While on each flight, I ended up wearing my thermal vest, long johns, jeans, and my ski jacket as the aircraft is so cold. My toes were particularly cold by the end of each flight! With the ATom-2 happening in Northern Hemisphere winter, we are still trying to figure out if we can borrow suitable clothes to wear when we arrive in Alaska and Greenland. But, as I’m barely 5 feet tall, with child size feet, I’ll probably end up needing to bring my own gear anyway, so maybe my snow boots can work as my aircraft slippers next time? 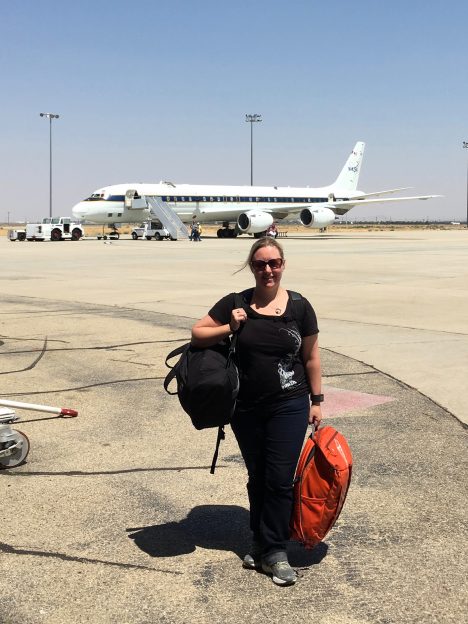 Róisín Commane hauling her bags off the DC8 for the final time on Atom-1.

It’s really easy for me to put on weight during projects like ATom. So I’ve been trying to eat small portions of healthy food, as well as be active on days we don’t fly. My running is slower than some people’s walking but at least it’s something! For lunch on the aircraft, I have mostly eaten ham and cheese sandwiches, with some peanut butter sandwiches when we couldn’t get meat and cheese. My lunches have been functional but uninspiring. And then Shuka Schwartz wanders by with the most amazing smelling food and I get food envy! I’m still trying to figure out how he makes such good lunches. I’m open to suggestions on this as I’m not a particularly inventive chef. Maybe we can bring a few more ingredients to help construct more imaginative lunches. Or maybe I’ll just start ordering extra at dinner the night before a flight for lack of better options. 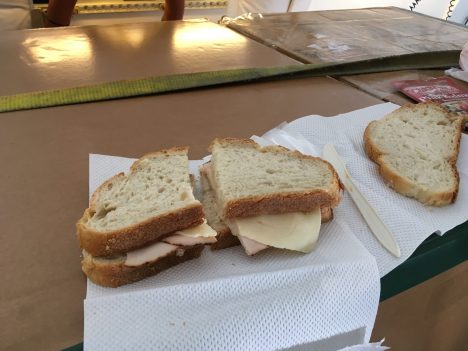 Not the most inspiring lunch… Photo by Róisín Commane

We knew internet access would be difficult in some locations but it turned out to work quite well in most locations in the Pacific. I think this gave me a false sense of confidence in internet infrastructure and I didn’t arrange to not contact people while in the Atlantic. The internet was down while we were on Ascension Island, but I did manage to send a text, from the one working phone, telling my family I arrived safely. Internet access was really expensive in Kangerlussuaq, but I have to admit that I was happy to have a break from answering emails for a few days – and I don’t think I was the only one! I think I will just plan on a complete contact black out for those locations next time so my family is not concerned. 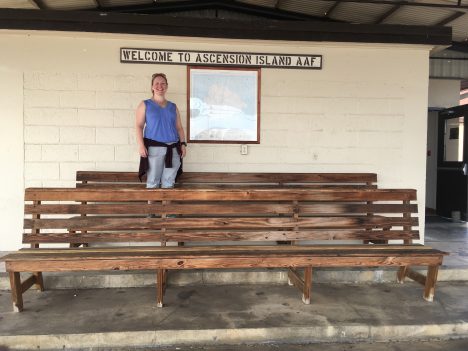 This is the first time I’ve been involved in where I’m one of the ‘media people’. Like most people, I’m used to taking photos (to show my family and friends) but videos have proved to be more useful to the NASA media reps. They are doing are doing a wonderful job given how little I’m giving them to work with! We’ve also done some discussion of the science on video. It took a lot of encouragement, but I have started to not worry too much about how awful I think I look on camera or how weird my voice sounds. Instead, I’m just not looking at it 😉 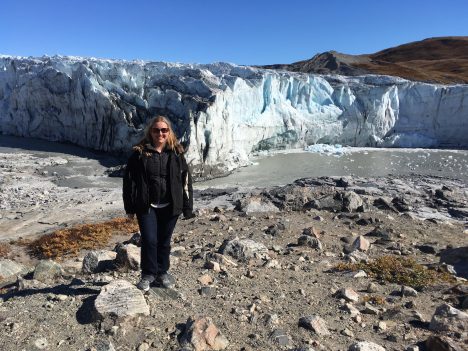 As part of doing the media outreach I’ve been asking the ATom scientists and crew to think of their favorite ATom memory. Most people have great memories of places and events. I will always remember the strikingly blue melt ponds on the Greenland ice sheet and how little sea ice there was north of Alaska. But I think my favorite memory from ATom will be the people. We’ve travelled around the world on an aircraft with 42 people on board: some people left us in Christchurch while more arrived to join the adventure. In such close quarters, I was aware that little things could have mushroomed into major conflicts. But people worked really well together. Friendships were formed and the science benefited greatly from a fantastic team effort. In particular, we owe a huge thank you to the crew of the DC-8 who brought us safely around the world and made all the measurements possible. 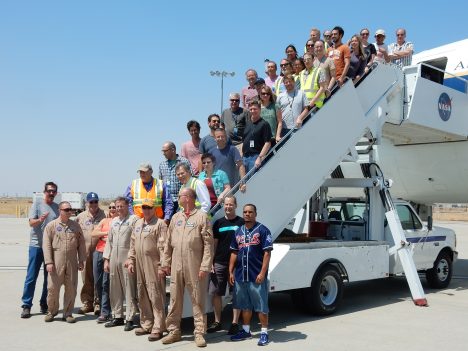 ATom Scientists and crew are happy to be home! Photo by Michael Prather.

This entry was posted on Tuesday, August 30th, 2016 at 2:01 pm and is filed under ATom: World Survey of the Atmosphere. You can follow any responses to this entry through the RSS 2.0 feed. Both comments and pings are currently closed.

One Response to “A Globe Trotter’s Lessons Learned”