Is There Any Such Thing as Remote Clean Air?

As the first phase of the ATom project draws to a close, I am still surprised at just how far the influence of land, and fires in particular, can travel through the atmosphere.

Most of the time, the influence of land (and pollution that people generate) can only be seen a few miles from shore. When flying south into Alaska from the Arctic ocean, we saw the tell-tale chemicals of land influence about three miles offshore; uptake by plants reduced the amount of carbon dioxide (CO2) and increased the methane from emission from wetlands. Flying from James’ Bay in over the Hudson Bay Lowlands, we saw an even larger increase in methane a mile offshore than we saw in Alaska. I should not have been surprised, because Hudson Bay Lowlands are the largest source of natural methane in North America.

The Hudson Bay Lowlands in Canada are a large source of methane. Photo by Róisín Commane

But in other places we also saw pollution thousands of miles from shore, in amongst some of the cleanest air in the world. In fact, some layers of pollution were so concentrated that we could see them by just looking out the window. In the photo below you can see a brown/pink layer of pollution that we found hundreds of miles from land as it cuts through the beautiful blue sky and ocean below. In layers like this, CO, other pollution related gases and particles like black carbon will be pretty high. We saw pollution from Asia transported out over the Pacific ocean and pollution from the U.S. over the Atlantic ocean.

Pollution layers over the Pacific ocean. Photo by Róisín Commane

I’ve learned that pollution can be transported anywhere. The amount of pollution in the Arctic was especially stark. In Greenland we could see the black layers forming on the top of the ice sheet as pollution from far away gets transported to the arctic and deposits on the ice. The black layers absorb more heat than clean ice leading to increased melting at the top of the ice sheet, which forms deceptively beautiful melt ponds on the ice sheet. We met researchers from the UK “Black and Bloom” project (@BlackandBloom) in Kangarlussuaq and heard how some of this black layer can be composed of algae, which will also enhance warming and melting. 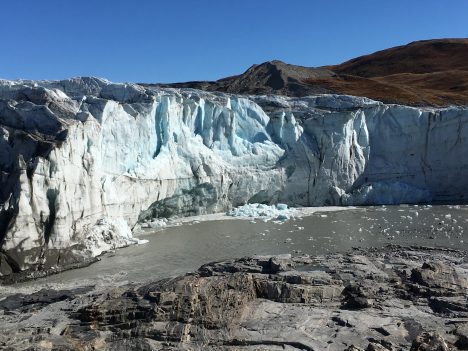 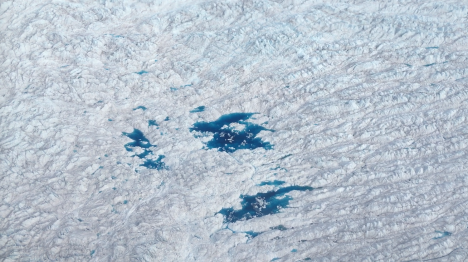 However, not all pollution is man-made in the typical sense. In the Arctic regions north of Alaska and Greenland, which we sampled almost three weeks apart, we saw the high carbon monoxide (CO) given off by the fires in Siberia. Fires in this area are a part of the natural cycle, but as temperatures have been rising in the Arctic, the frequency and magnitude of big fires like these have increased. In Alaska last year, over five million acres burned. In Canada the year before 11 million acres burned. These regions have carbon rich soils similar to dry peat bogs, that often continue to smolder and incompletely burn long after the hot temperatures of the main burn. Lower temperatures and incomplete burning leads to the release of more CO, soot and other pollutants than for a hot, completely burning fire.

The arctic regions are not the only place we see the influence of very distant fires. We sampled air from fires burning in Africa as we came into land in Ascension Island. As the Island is 1,000 miles from any continent, I was really surprised that the high CO could survive that journey! CO has a lifetime of about a month in the troposphere, and some of the other chemicals are much shorter, so the air has to travel to remote islands like Ascension fairly quickly.

I’m often a little torn by seeing layers of high pollution in the remote atmosphere. While it’s exciting to see high numbers on our instruments, it’s really disappointing to think that the places we think of as pristine see so much human influence. But any time I get a little down, nature has a way of cheering me up: such as when the sun and clouds combine to create a glory around our aircraft. You can tell from where the glory is centered that I was sitting just behind the starboard (right) wing of the aircraft as we ascended through the cloud layer. A glory forms around an aircraft when there are clouds (or water) in the air and the sun is directly behind the aircraft.

The shadow of the DC-8 on clouds below, haloed by a “glory”. Róisín Commane

This entry was posted on Friday, August 26th, 2016 at 11:18 am and is filed under ATom: World Survey of the Atmosphere. You can follow any responses to this entry through the RSS 2.0 feed. Both comments and pings are currently closed.