From the Desert to North Pole

I have been looking forward to the second leg of the ATom mission since I first worked up the plan, collaborating with the others on the leadership team and with the flight operations crew from NASA’s Armstrong Flight Center. It would start in the hot, high desert in Palmdale, California, and journey to the high Arctic, dipping low over the floating sea ice near the North Pole, before ending in Anchorage, Alaska. What an opportunity to observe the extremes of Earth’s weather and climate, atmospheric composition, and ecosystems!

We flew this mission on August 1. The contrast between the environments could not have been more dramatic. We started our work at 4 a.m. so that the DC-8 could take off before the searing heat of the day — forecast to be 110 F (43 C). A few hours later we were in one of the coldest, most remote parts of the Northern Hemisphere. It was stunning and beautiful. But also sobering, because both places are experiencing huge impacts from the warming climate and from air pollution carried there on the winds.

In the High Desert: Fires, Urban Pollution, and a Solar Farm 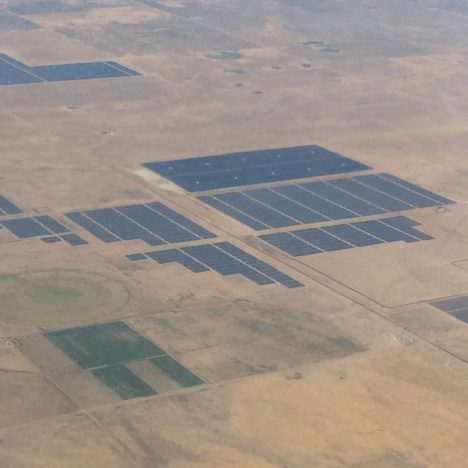 The desert near Palmdale was particularly forbidding when ATom started up. Large fires in the nearby mountains blanketed the region with choking smoke as ash sifted down from the sky. Increasingly frequent fires are an expected consequence of climate warming in this area. Even after the fires died down, the atmosphere over the desert was hazy with urban pollution originating in the Los Angeles Basin. It was unnerving to be in the midst of these events.

But as we departed the desert, I could see huge solar and wind farms generating carbon-free electricity. This sight was much more hopeful. If we apply our minds and resources to the problem, we can make significant progress in slowing the increase in atmospheric CO2 and generate new economic value at the same time. It is a long process though—a generational challenge.

In the High Arctic: Melting of Floating Ice, and More Fire Influence on the Atmosphere

We flew for several hours in the DC-8 and finally reached our destination at 80o N, the top of the world. The weather was very unfavorable at first, with heavy cloud cover obscuring the surface and making it unsafe for the DC-8 to fly low. I was really worried that we would miss the chance to sample the atmosphere and see the fabled ice cap. Then we found breaks in the clouds, and we could see the broken ice floes at the surface. We flew down to 500 feet (150 m) for a close encounter.

These images are deeply disturbing. Here we are, almost at the North Pole, and the floating ice is broken up, with dark water between flat slabs that are covered with dark covered melt ponds. Dark features accelerate melting of the floating ice by absorbing sunlight and soaking up the warmth that radiates from the atmosphere (“longwave radiation”). As melting increases the areas of open water (called “leads”) and melt ponds, more energy is absorbed and melting is accelerated. We can see with our own eyes the phenomenon known as “positive feedback”: warming and melting feed on each other, accelerating the disappearance of the ice cap. 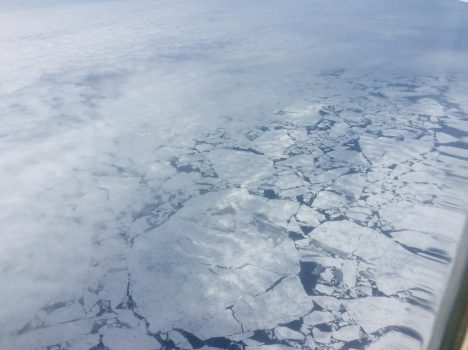 Our first glimpse through the clouds of the floating ice at 79 N on 1 August 2016. Credit: Steve Wofsy 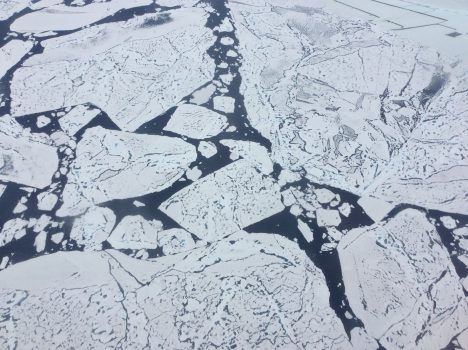 Close-up view of ice floes at 79 N from 500 feet. The dark features on the ice are melt ponds, and the dark areas of between the floes are open water of the Arctic Ocean. The floes are very flat, signifying “first year ice”. Credit: Steve Wofsy

The flatness of the ice is also shocking. It is “first year ice” that formed last winter from the freezing of open water. We never saw any of the lumpy “multi-year ice”, which used to survive for many years when the climate in the high Arctic was colder than it is today. A lot of ice that we saw at 80o N yesterday will be gone by the end of the melting season in September. I don’t know if we will have an open ocean so close to the pole this year, but the ice that we saw certainly didn’t look very resilient.

The coverage of floating ice has shrunk dramatically in the Arctic ocean over the past 35 years (that’s just ½ of my age!), as shown in the chart below. In the 1980s, the whole Arctic ocean was ice-covered at the end of winter, and about half remained ice-covered at the end of the melt season. In the 2000s, this picture abruptly changed. There was no longer full coverage at the end of winter, and, by the record low year of 2012, late summer ice cover had been reduced to only one half of its former extent. That is a drastic change to the global environment, in just the time since my children were born. 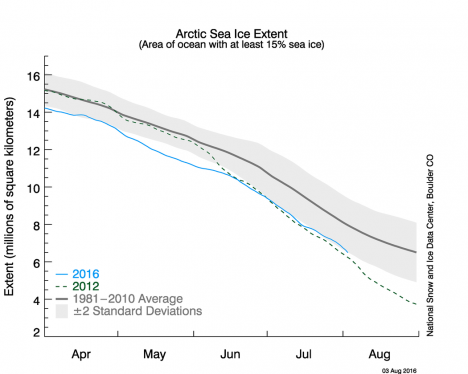 In 2016, as you can see from the chart, we are on track to match that record low ice extent from 2012. The high Arctic really is the “point of the spear” when it comes to climate change. But very few of us get to see the ongoing changes with our own eyes. The scientists and crew flying on the DC-8 are really privileged to have witnessed this phenomenon first hand, even though it was unsettling to observe it.

The atmosphere at 80o N had very low levels of pollutants. But once we turned around and headed for the Alaskan coast, our instruments reported strong signals from the huge fires burning the boreal forest in Siberia. This pollution was pervasive for hundreds of miles before we made landfall at Deadhorse, Alaska—the start of the Trans-Alaska oil pipeline. Viewing the huge oil and gas facilities in Deadhorse certainly gave a contrasting impression compared with the solar farms in California!

Volcanoes on Our Route – Mother Nature is Really Amazing 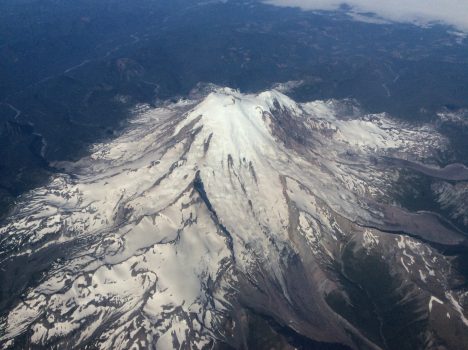 I will close on a more positive note. On the way from California to the Arctic, we flew by the stunning volcanoes of the Northwest U.S. These iconic forms remind us of the beauty and overwhelming power of Mother Nature. Our Earth is really awe inspiring, and worth protecting.

This entry was posted on Thursday, August 4th, 2016 at 1:43 pm and is filed under ATom: World Survey of the Atmosphere. You can follow any responses to this entry through the RSS 2.0 feed. Both comments and pings are currently closed.

7 Responses to “From the Desert to North Pole”