THE BLOW
So far we have been blessed with calm seas and fair winds. We arrived yesterday at our last station, somewhat rested after a 24 hours transit and ready for the grand finale. Neptune had another plan. Half way through the station the winds picked up very quickly, reaching 50 knots with gusts of 60 and the ocean began to build up. The aerosol team got very excited. For oceanographers, the prospect of completing the station looked gloomy. At 11:00 PM I went to the Alvin hanger, the official gathering spot of the nocturnal NCC (NAAMES Coffee Club). All the ‘regulars’ were there with the coffee mugs and it was clear that there would be no overboard deployment of instruments at night (or the day after) so we just sat for a long time, on a pile of crates (aka the bleacher), watching the waves flooding the stern and admiring the power of the ocean. A visit to the bridge provided even more dramatic views of the developing storm. 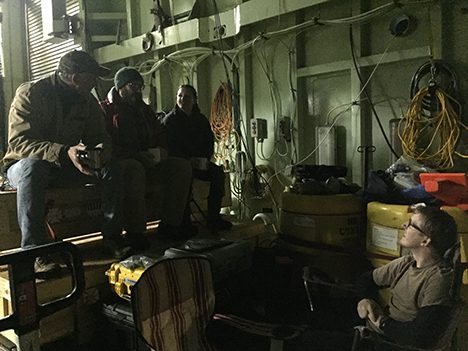 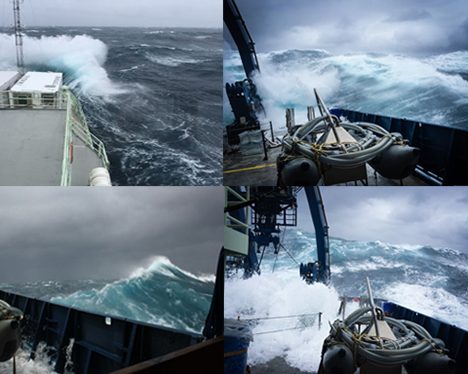 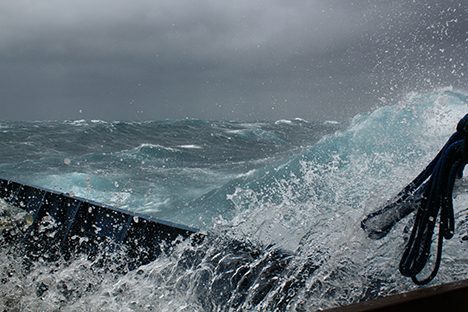 A wave splashing on deck of the RV Atlantis during ‘the blow’. Photo: : Cleo Davie-Martin

Twelve hours later, a fully developed sea with 30 ft. waves. Two of the incubators on the fantail got damaged and other items shifted place or were lost for good. No one is allowed on deck. We are rocking and rolling but everyone is still smiling. Lunch required good motor skills and coordination, eating a hamburger while keeping the plate and cup from flying across the table. The lab spaces that normally hustle and bustle with activity are fairly quit today and people take the opportunity to get much needed sleep, process data, relax and play cards. For our team (and the aerosol group) sampling continues through the inline system (described in an earlier blog), pumping seawater into the lab and measuring optical properties, abundances and species composition of plankton. Tomorrow we will begin our journey back to WHOI. Some high seas are still expected but nothing like what we have experienced today.

Written by Lee Karp-Boss (member of the nocturnal NCC)

This entry was posted on Tuesday, May 31st, 2016 at 5:32 pm and is filed under NAAMES (North Atlantic Aerosols and Marine Ecosystems Study), Uncategorized. You can follow any responses to this entry through the RSS 2.0 feed. Both comments and pings are currently closed.