It is the last day of mobilization before the second NAAMES expedition is underway. The day started very early as all those preparing to leave land for a month pack up their bags, check out of the hotel, make final quick runs to WalMart to get those last minute items you suddenly realize you cannot go a month without, and finally carrying all your belongings onto the ship to your bunk room. But first, before going to the ship….COFFEE! Each morning of mobilization starts with one of the two coffee shops near the dock, Pie in the Sky or Coffee Obsession. Once our group had our “wake-up” concoction in hand we walked onto the ship already hustling and bustling with scientists making final touches setting up their work stations, tying down absolutely everything (equipment, bottles, incubators, boxes both empty and not). The only things without ropes, bungees, and ratchet straps were the scientists and crew members. The crew were also busy getting the ship ready to handle any weather conditions we may encounter and securing all the instruments. As if the ship was not already in a frenzy getting everything prepared for departure there was a NASA social event consisting of 20 social media fans from NASA who are involved with all sorts of media forums including but not limited to instagram, twitter, snap chat, and facebook. Due to the large fan based NAAMES has accrued, they were split into 3 groups of 7 as they made their way to several tour stations lead by NAAMES scientists who volunteered some of their time to explain measurements we are taking, covering all the bases: how, why, and when. General life on board was also covered. Things like where we eat, sleep and shower under all types of weather conditions and what we do in our “downtime”, something that is actually quite rare and for which most people use to catch up on lost hours of sleep. The social media fans arrived at 1000 and finished up around 1400. By then everyone was exhausted and feeling good about leaving early the next day. 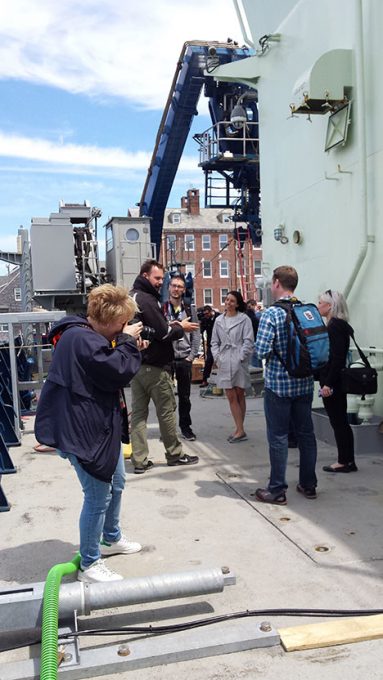 Unfortunately there was no time to rest with a science meeting at 1600 and paperwork to gather and send off. It was a long day, even busier than normal, but extremely productive. Goodbyes were said to group members that came out to help mobilize which always makes the cruise seem more real and kicks the excitement level up a notch. Dinner was prepared at 1700 for those not planning to eat off the ship. Later into the evening we were lucky to witness a stunning sunset, hopefully to be the first of many beautiful sights when we are in the middle of the ocean waking before the sun rises to start our day. One last evening was spent off the ship to appreciate the last of stagnant, solid ground. It was a successful final day. Now it’s time to gain our sea legs back and head out into that big blue ocean full of mysteries we all can’t wait to solve.

This entry was posted on Wednesday, May 11th, 2016 at 10:50 pm and is filed under NAAMES (North Atlantic Aerosols and Marine Ecosystems Study). You can follow any responses to this entry through the RSS 2.0 feed. Both comments and pings are currently closed.