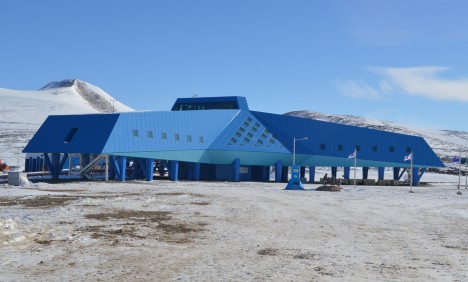 Day to day life at the base station is varied primarily by timing of our field expeditions. We’ve had some very busy days getting equipment ready, deploying and checking our gear. In between, however, we are essentially operating as we would do at the office. We have set up base in the ‘Extreme Geophysics Group’ laboratory joining seven Korean scientists. Work tends to happen six days a week, with Sunday as a break (and no 7 am wake-up music!). Also on Sundays there are sometimes mini-expeditions. For example, a group of us walked a couple of miles over to Gondwana, the German base, which is semi-inhabited (two people are there at the moment keeping things ticking over). We were hoping for some “Kaffee und Kuchen” (coffee and cake) but couldn’t find anyone around. Instead we looked at rocks ejected from the nearby volcanic Mt. Melbourne, found some lichen and watched the many skuas (seabirds) flying around. We also ventured down onto the sea ice and found a nice ice slide which entertained us for a while (who said scientists couldn’t be silly). 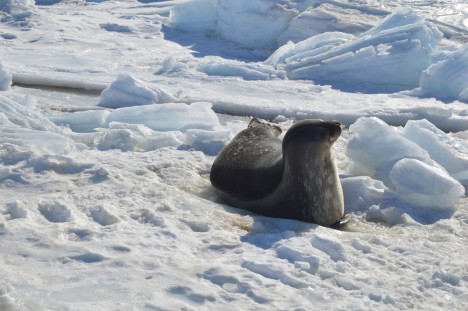 Last Sunday, Ryan and I joined a short expedition over to Mario Zucchelli, the Italian base. Recently a crack, or lead, has opened up in the sea ice so it’s no longer safe to drive the heavy Piston Bully tractors over. As an alternative, the Koreans and Italians both drove up to the crack and we exchanged passengers by hopping over the gap (it’s not really that big). There were some nearby Weddell seals hanging out near the open water, which we got a good look at. You have to be careful not to get distracted and wander into one of the seal holes which are just a bit darker than the surrounding ice – that would be a chilly surprise! 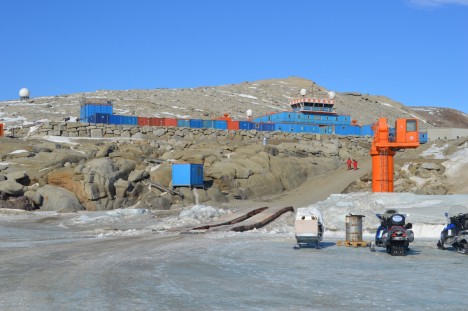 The Italian base was built 31 years ago so looks a bit more worn in than Jang Bogo but is very cosy inside. We were given a tour and fed some excellent espresso and gelato. It was really interesting to see the differences between the two bases and even the landscape. Despite being only 6 miles (10 km) apart, the rocks around Mario Zucchelli look much more weathered and eroded compared to much rougher terrain at Jang Bogo, perhaps due to the closer proximity of the volcano to the South Korean station.

At Jang Bogo, another big difference is the food and is the subject of much conversation with the Western scientists. There has been a large range of foods produced which keeps things interesting. A lot of it is a surprise since we can’t read the Korean menu, although being able to cope with spicy food is definitely an advantage (Ryan is better with this than I am). By far the best meal was Korean BBQ evening where we cooked meat and prawns on a hotplate right on the table and had a brilliant array of salad leaves (grown in house) and sundries to eat with the meat. What a meal!

This entry was posted on Thursday, December 3rd, 2015 at 4:18 pm and is filed under Nansen Ice Shelf, Antarctica 2015. You can follow any responses to this entry through the RSS 2.0 feed. Both comments and pings are currently closed.

One Response to “Life at Jang Bogo”