The CYGNSS satellite mission is actually eight satellites working together as a constellation, instead of one big satellite.  The good and bad of having 8 small satellites versus one big satellite were discussed in the previous post.  When the mission was proposed, we had already decided how many satellites we needed to have. Deciding on eight took a lot of calculations. In this post, I would like to share with you some of the thoughts that went into these calculations.

There were a couple of important questions that we wanted to consider: (1) how much of the Earth can be measured in one day using a constellation of satellites? and (2) once CYGNSS takes a measurement over a specific point on the Earth, how long will it be before it measures that point again?  These questions are somewhat related to each other, but not as much as you might expect.  They are also somewhat difficult to answer, but we knew that we had to address them if we wanted the mission to move forward.

How much of the Earth can CYGNSS measure in one day?

Almost immediately, we realized that the question itself was flawed. CYGNSS would be a mission to measure winds inside of hurricanes (or tropical cyclones, to be more general).  We didn’t care how often CYGNSS would measure the winds over, say, Antarctica, since there has never been a hurricane in Antarctica.  We therefore started out by plotting out where hurricanes  have actually occurred, which is shown in the figure below.

Locations of 10 years worth of tropical cyclones. The color represents the intensity of the wind speeds, with blue being weaker winds and red being stronger winds. The white section denotes where CYGNSS will orbit.

In order for a hurricane to form and grow you need two ingredients: (1) the Coriolis force, which is zero at the equator, and (2) warm water, which is most plentiful at the equator.  Hurricanes tend to form and be strongest just off the equator in the northern and southern hemisphere, but not really at the equator. As they move away from the low latitudes, they lose power quickly and often die out.  Therefore, there is a band around the low latitudes where the vast majority of cyclones have occurred (hence the name “tropical cyclone“).

When looking at this figure, it becomes clear that if CYGNSS goes to too high of latitude, say over Canada, then it is really just wasting time.  We needed to make sure that CYGNSS stays in the tropics.  And, when we calculated how often CYGNSS could measure some spot on Earth, we really only needed to care about the points where there had been a cyclone in the past, since those are the most probable locations for more cyclones.

We wrote a program that took a bunch of pretend CYGNSS satellites and a bunch of mostly-real, but virtual, GPS satellites and calculated where they would measure winds over the Earth.  We broke the world up in bins that were about 15 miles by 15 miles (which is about the resolution of the winds that CYGNSS will measure), and noted which bins have had cyclones in them in the past.  We then propagated the satellites around the Earth for a day and figured out all of the measurement points across the whole globe for the whole day and compared those to the bins with storms.  The percentage of storm bins that had at least one wind measurement in one day is what we call our coverage. Below are some figures that show all of the measurement points across the Earth that the software computed. These are after one, two, ten and fifteen orbits (each CYGNSS satellite will orbit fifteen times in one day). 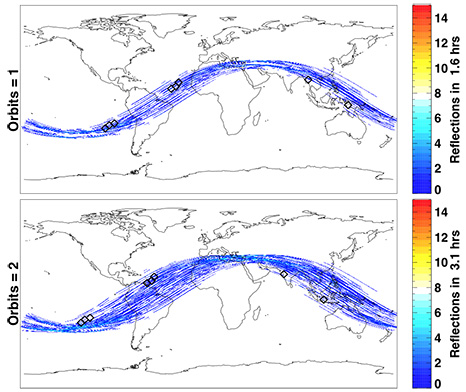 Software predictions of where CYGNSS will take measurements after one (top) and two (bottom) orbits. 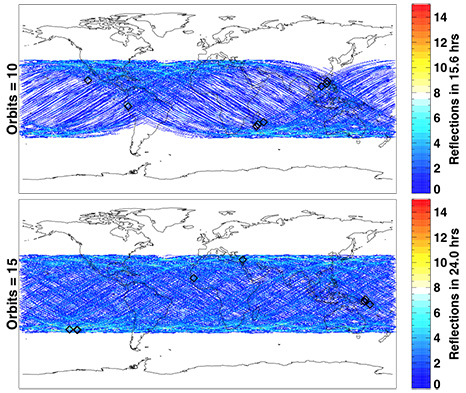 Software predictions of where CYGNSS will take measurements after ten (top) and fifteen (bottom) orbits.

Let’s take a very short break and talk about satellite orbits for a moment. If we ignore many things, we can describe a satellite orbit with a couple of numbers.  The first is the altitude that it will orbit at (this is a dramatic simplification). We chose 300 miles as a hunch that it would be a good orbital altitude.  And that turned out to be good for a variety of reasons, which I will explain in another post.  Another very important number that controls the orbit of a satellite is the “inclination”.  Simplistically, this is the maximum latitude that the satellite will pass over during an orbit.  So, if the inclination of a satellite is 42 degrees, it will just reach the latitude of Ann Arbor, Michigan (42 degrees) each orbit (but won’t pass over Ann Arbor each orbit), and in the southern hemisphere, will get down to -42 degree latitude.  If the inclination was 90 degrees, it would pass over the north and south poles every orbit.  If it was 0 degrees, it would stay over the equator all of the time.

When I talk about not wanting CYGNSS to pass over, for example, Greenland, that means that we wanted to limit the inclination of CYGNSS’s orbit.  The question was which inclination would work best?  Well, with our software, we could answer this by putting in different inclinations for CYGNSS and seeing how the coverage changed. Here are some of the results:

24 hour storm coverage statistics for CYGNSS given different possible inclinations for the satellites. We were wanting at least 70% coverage.

So, the answer to the first question turned out to be: in 24 hours, CYGNSS, at an inclination of 35 degrees, will be able to measure about 75% of all points on Earth where storms/cyclones have been measured before. This is very close to the capabilities of other satellites that have measured winds over the ocean.  Which is good!

The second question that was asked above is: Once CYGNSS takes a measurement over a specific point on the Earth, how long will it be before it measures that point again?

Since there will be eight satellites in the CYGNSS mission (which we have not even justified yet!), you can imagine having what is called a string-of-pearls: if you were to draw a string around the Earth (or put a hoola-hoop around the Earth), you could put eight satellites along that “string”.  These satellites then orbit along that string, and the Earth rotates under the string.  If you were to make a mark at a single point along the string, and then measure when satellites come across that line, you would get something like: 0 minutes, 12 minutes, 24 minutes, 36 minutes, etc.  The satellites in the CYGNSS constellation therefore come across the point on the string every (roughly) 12 minutes.

Now, the problem is that the Earth is rotating under the string.  If the mark on the string were at the equator, by the time 12 minutes has gone by, the Earth will have rotated by about 200 miles!  That means that each satellite will measure a different place on the Earth when it passes through the same point in the orbit plane, simply because the Earth is rotating. If CYGNSS were orbiting over the poles, then the best we could hope for is about 12 hours repeat times, meaning that the average time between measuring the same point on the Earth would be about 12 hours. But, since CYGNSS has a 35 degree inclination, it has a very strange pattern. At certain times of the day it measures the same point a lot, while other times of the day it doesn’t measure that point at all.

12 hours later, however, the orbit was exactly opposite, where CYGNSS took measurements over South Africa, but not over the Middle East (and the north Pacific as opposed to the south Pacific). CYGNSS tends to have a LOT of repeat measurements between about 25-35 degrees latitude (and -25 to -35 degrees latitude) during parts of the day, and no measurements during other parts of the day.  Interestingly this leads to an average repeat time over the entire tropics region of about 5-6 hours, which is, on average, better than most large satellites that orbit over the poles.

These were two questions that we had to try to answer before we even started designing the satellites or even before we submitted the proposal to NASA to ask them for the money to build the CYGNSS satellites.  We had to tell NASA exactly what they would be getting for their investment.  All of this was leading up to the question of how many satellites do we really need to launch in order to get the measurements that help us address our science goals.

This entry was posted on Monday, July 20th, 2015 at 7:00 pm and is filed under Cyclone Global Navigation Satellite System (CYGNSS). You can follow any responses to this entry through the RSS 2.0 feed. Both comments and pings are currently closed.