It’s 3 a.m. in Yanco, Australia, a remote region located 380 miles (612 kilometers) west of Sydney. While most people are still in bed, a small team of scientists prepares for takeoff in an aircraft that will gather data about the soil below. The early-risers are investigating the amount of moisture in the top 2 inches (5 centimeters) of the soil — a measurement similar to those made by NASA’s Soil Moisture Active Passive (SMAP) observatory orbiting 426 miles (685 kilometers) above in space.

In total, around 40 scientists are studying the Australian soil as part of the Soil Moisture Active Passive Experiments-4 (SMAPEx-4) field campaign from the ground and air — the first major soil moisture field campaign conducted since SMAP launched Jan. 31, 2015. The three-week study, conducted from May 2 to May 22, is designed to validate soil moisture measurements from SMAP.

“Our scientists are taking the time to validate the SMAP products,” said Peggy O’Neill, SMAP deputy project scientist at NASA’s Goddard Space Flight Center in Greenbelt, Maryland. “This field campaign will help provide proof that our hard work is paying off.”

This field campaign is the fourth in a series of five SMAPEx campaigns in the region. Jeff Walker, the SMAPEx-4 project lead and professor at Monash University in Melbourne, Australia, says the previous campaigns were for algorithm development using aircraft instruments that simulated SMAP readings, but this campaign is for validation of actual SMAP algorithms and products.

“The aircraft campaign is the best way to directly test the algorithm for SMAP’s core soil moisture product at a spatial resolution of 9 kilometers,” said Simon Yueh, SMAP’s project scientist at the Jet Propulsion Laboratory in Pasadena, California. “The campaign’s three week duration will allow the observations of some precipitation and dry down cycles to validate the SMAP products over a variety of conditions.”

The SMAP satellite is estimated to pass over the Yanco region at approximately 6 a.m. local time and provide three high-resolution readings per week that the SMAPEx scientists can use. SMAP carries an active radar and passive radiometer. The active microwave radar sends a signal to the ground and measures the reflected radar pulse sent back to SMAP—a measurement called backscatter. SMAP’s passive radiometer measures brightness temperatures, a measurement of temperature based on how much microwave radiation is naturally coming from the ground. These SMAP measurements are converted to soil moisture observations.

The aircraft, also carrying a radar and radiometer, provides microwave backscatter and brightness temperature observations at high resolution to help verify SMAP’s products. The aircraft flies for about six hours during a SMAP overpass and mimics SMAP’s readings in terms of wavelength, viewing angle and resolution ratio.

On foot, scientists are measuring soil moisture directly. They use probes that stick into the ground and measure the amount of water in the top inches of the soil. These data are used to evaluate the calculated soil moisture measurements from aircraft and SMAP. The Yanco region has diverse climate, soil, vegetation and land cover, which allows for more rigorous testing of the SMAP algorithm over a variety of surface types and conditions. 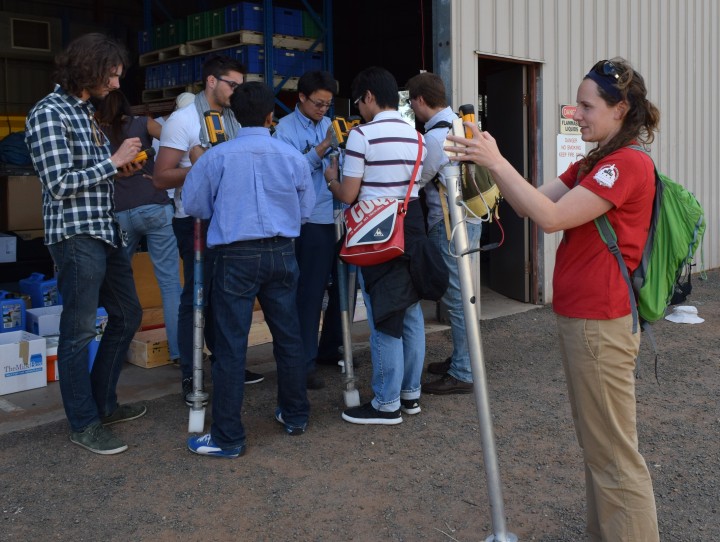 Amy NcNally (front) of NASA, Alex White (far left) of USDA and other members learn how to operate their field equipment. Photo by Lynn McKee, USDA.

The field teams also measure the land’s vegetation coverage and surface roughness. Vegetation is important to factor in, as it influences the radar and radiometer signals observed by SMAP. For instance, denser vegetation tends to block signals from the soil surface and can appear as a warm to the SMAP radiometer. This would tend to produce lower (or drier) retrieved soil moisture measurements if the presence of vegetation was not taken into account.

The field campaign is a large effort involving several parties. The SMAPEx-4 team includes scientists from Australia, The Netherlands, Germany, France and the United States, including from NASA and the U.S. Department of Agriculture (USDA). The campaign receives vital support from Yanco Agriculture Institute in Yanco, Australia in providing facilities, storage, heavy ovens and scales— items that would be difficult and costly to import. Walker, a member of the SMAP Science Definition Team, and his colleagues have been planning these campaigns for years with the first one starting in 2010. The last SMAPEx campaign in the series is scheduled in the Yanco region in September 2015. 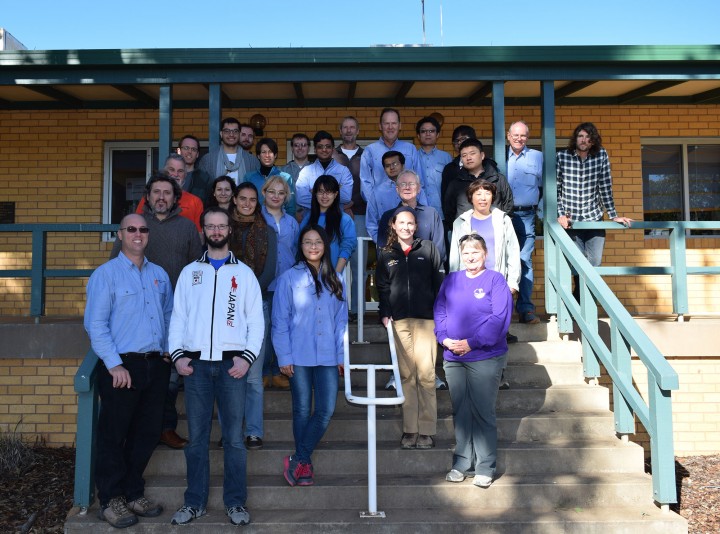 “Field experiments are one of the most demanding parts of validation in terms of human and fiscal resources. Therefore, they must be well designed and focused on specific objectives,” said Tom Jackson, SMAP Science Team calibration/validation lead and research hydrologist at the USDA.

To read blogs from the scientists participating in the field campaign, visit: smapex4.blogspot.com.au

This entry was posted on Thursday, May 7th, 2015 at 7:21 pm and is filed under Soil Moisture Active Passive (SMAP). You can follow any responses to this entry through the RSS 2.0 feed. Both comments and pings are currently closed.