Wow, That Was a Lot of Snow

Tents before the storm (left) and snow reaching near the top of our tents after two storms (right).

April 24, 2015 — I believe in one of my first blog posts I mentioned that we were working in an area of high accumulation (snowfall) on the Greenland Ice Sheet. I would like to change that to an area of VERY HIGH accumulation! Actually Southeast Greenland does receive the largest amount of snowfall on the entire ice sheet. In previous years we have experienced storms dumping over a meter of snow. This year we had one of those storms bringing well over a meter of snow and then 3 hours after the first storm ended we got a second, bigger storm, pushing our 5 days snow total to nearly 3 meters of snow.

The amount of snow is best summed up by a dinner conversation in our cook tent where Olivia, being on the ice sheet for the first time, asked Clem, Josh and I, ice sheet veterans, what the biggest storm we had ever been in was like. We all responded, in unison,” this is the biggest storm we have ever been in!” While the weather was not particularly cold or windy, it just kept snowing. The low wind made it possible for us to continue science measurements through the storm in a special tent, with no floor, providing both shelter and access to the snow.

The storm hit on the day we were finishing up drilling. We drilled a 56 m borehole into the aquifer, reaching water around 19 m below the snow surface just as we expected. Drilling ice cores is a routine practice on the ice sheet and allows us to see the structure of the ice and measure the ice density; it is less dense near the surface and then compacts to ice at around 35 m in this region. Josh drilled the ice core using both a mechanical drill, called the sidewinder, in the top 19 m of dry firn and with an electrothermal drill in the water saturated firn below. Josh would drill about 1 m of core every 10 minutes and then Clem and I would weigh it, measure it, record ice layers, record the ice temperature and bag certain sections for Olivia’s hydrology measurements. Once the core was processed we took the remaining core to the kitchen tent to melt for our drinking water. (The more dense ice from deeper in the ice sheet produces more water than the less dense surface snow, so we are happy to use it for making water for the camp.) 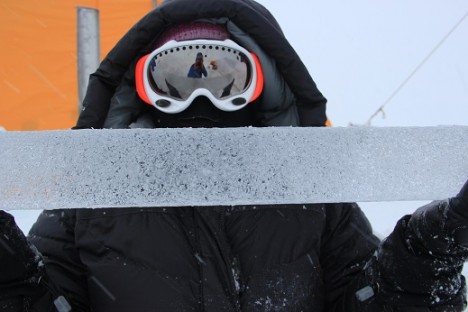 Lora with Clem reflected in goggles holding an ice core with water bubbles. 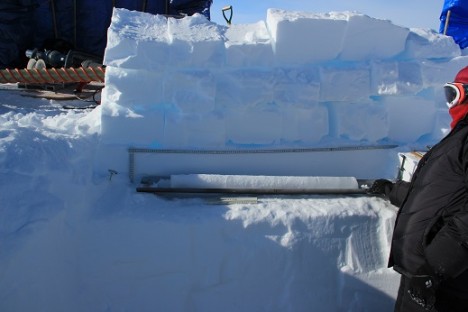 While we were finishing the drilling Kip and Olivia were working out the kinks of using their equipment for the first time on an ice sheet. They worked through a few freezing issues and quickly had the first every water samples from the aquifer. They melted a piezometer into the ice sheet, inserted a tube and started pumping up water. We were all ecstatic to see the water gushing out of their tube and into their sample bottles. 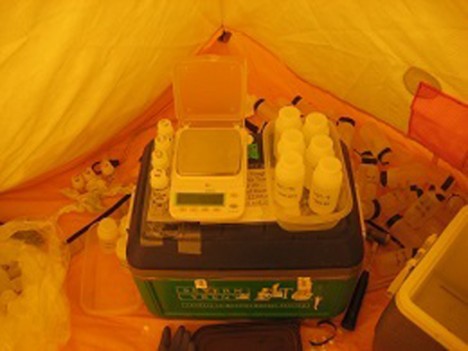 Water samples from the Greenland aquifer.

As the hydrology sampling continued so did the storm. We had not received another resupply flight so we were running low on fuel, did not have a snowmobile or sled to move the drill to our next site and our additional team mates and measuring equipment had yet to arrive to complete more science. We knew we were already very delayed so we made the decision to postpone our seismic measurements until the fall. In the meantime the snow continued to fall!

By the third morning of the storm we were all sinking into the snow at least up to our thighs, if not our chest. Our tents were about 7 meters apart and it could take 5 minutes, and half your energy, to break trail between them. We often found it easiest to craw on the surface as opposed to walking. While the hydrology crew collected samples the rest of us dug out camp. We dug about every 2 hours. Even during the night we would have to get out and dig. In the end Josh moved into a tent with Kip and Clem, a tight fit, but more comfortable than digging out his smaller mountain tent all night. We also moved our fuel and generators into the cook tent and let our science gear get buried in its cargo line, marked with tall poles at either end, until the end of the storm. This reduced the area we had to shovel. 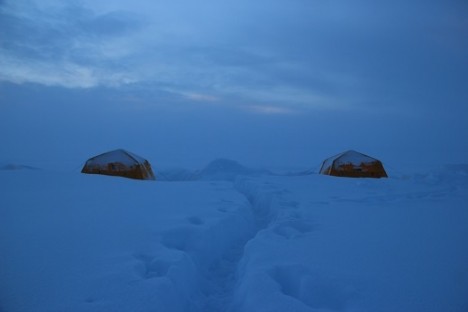 Path through the snow. 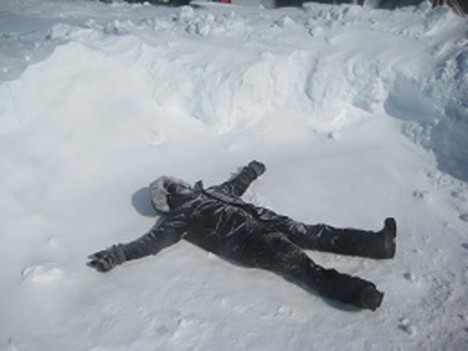 Josh relaxing after digging out the cook tent.

As the snow continued to fall, the winds stayed low. We were thankful for the low winds but knew after the storm the katabatic winds, outflow of cold air that gravitationally flows off the ice sheet, would kick up with a vengeance. On April 20th we woke up to light snow and no winds. The storm was over so we dug out all the cargo creating snow piles over our heads. Now we needed a Helo to bring in more science gear, and fuel, so we could keep working. The surface conditions were so soft that we could no longer operate a snowmobile even if we had one. At that point we knew we would only get one site completed this season because we really couldn’t move.

The calm was short lived. By the afternoon the Katabatic started with the furry we expected. The winds increased to 30 knots very quickly. Over the next 3 days the winds blew and moved all the snow around again. We were digging out our tent almost every hour. All we were doing was digging. Digging out the tents, digging the snow out of our pockets, goggles, gloves, everywhere!  We were tired! We made a decision to end the season once a Helo could get in since we had completed most of the measurements. Today, April 23, we finally got a Helo and all flew back to Kulusuk for a nice shower and warm meal. Tomorrow we will day trip back to remove our camp and, hopefully, let Anatoly make the first every electromagnetic resonance measurement on the aquifer. 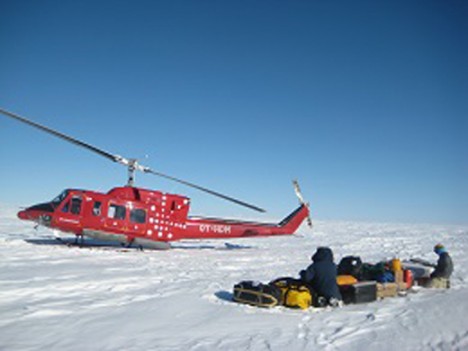 Finally our helo arrives and sinks to its belly.

This entry was posted on Saturday, April 25th, 2015 at 7:43 pm and is filed under Greenland Aquifer Expedition, Uncategorized. You can follow any responses to this entry through the RSS 2.0 feed. Both comments and pings are currently closed.

5 Responses to “Wow, That Was a Lot of Snow”