SMAP: The Dirt Behind Improved Forecasting 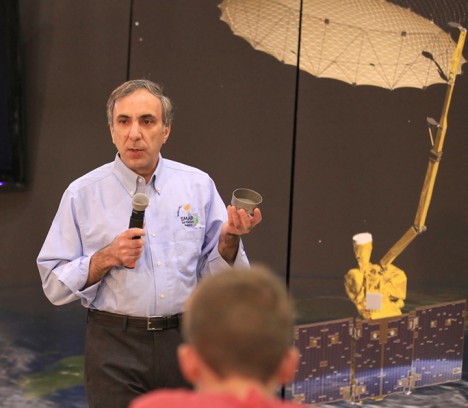 Dara Entekhabi has been waiting 15 years for this moment—the launch of NASA’s Soil Moisture Active Passive (SMAP) satellite from Vandenberg Air Force Base in California. Even a snowstorm wasn’t going to stop him: He flew out of Boston just before a major storm dumped over 30 inches of snow on his home.

The satellite, which launched early in the morning of January 31, could aid in studying storms like that in the future. “Next year, if the East Coast sees another major Nor’easter snowstorm, forecasters will be able to predict the flood potential with greater accuracy,” said Entekhabi, lead scientist for SMAP at the Massachusetts Institute of Technology, Cambridge.

That’s because SMAP can measure how much water the ground can absorb. If the ground is frozen, the soil will not be able to absorb much water from snowmelt. Some of the worst floods occur when it rains on snow. “Its like you suddenly tip a water bucket,” he said.

With this knowledge, Entekhabi began the campaign of building advocacy among the science community for a dedicated soil moisture satellite mission. The SMAP mission—a collaboration between the Jet Propulsion Laboratory, NASA Goddard, and science team members from various institutions—has had ups and downs along the road to launch.

“It’s been a long haul,” Entekhabi says. “But I live this every day and I can’t imagine doing anything else.”

This entry was posted on Monday, February 2nd, 2015 at 2:14 pm and is filed under Soil Moisture Active Passive (SMAP). You can follow any responses to this entry through the RSS 2.0 feed. Both comments and pings are currently closed.

2 Responses to “SMAP: The Dirt Behind Improved Forecasting”