Most of the North American population probably wasn’t paying much attention, but the largest Atlantic storm since SANDY safely passed by the mainland well East of Bermuda in Mid-September.  Edouard reached ‘Major Hurricane’ status as a category-3 storm on 9/16 and weakened over colder waters several days later.  Below is a track for Edouard, compared to the three other hurricanes of the 2014 season.

Edouard presented an excellent opportunity to assess several outstanding aerosol-related objectives for our group.  First, the spatial distribution of particles throughout hurricane regions is largely unknown.  Satellites can observe aerosols on the periphery of storms in clear regions, but the presence of clouds make these measurements impossible.  Thus, in-situ observations are essential to see if particles can survive transport towards the eye of the storms.   In general, we encountered much more clear air during storm transects at 10,000 ft altitude than I was expecting, and aerosol concentrations were highly variable from very clean (10-s of particles/cm3) to 1,000 particles/cm3.  Future analysis will aim at better understanding this variability.

Another objective of our project is to observe and explain high concentrations of particles inside hurricane eyes.  During Edouard, we consistently observed significantly enhanced particle number concentrations (up to 7,000 particles/cm3) and cloud condensation nuclei (CCN) in the clear, well-defined eye region.  While these concentrations do not compare with polluted urban/continental regions, they may play a significant role for hurricane intensity by seeding the eyewall and potentially strengthening the storm.  We hope to continue sampling storms like Edouard to understand where and under what environmental conditions these particles are formed.

The unique conditions encountered inside the eye of a hurricane are pretty amazing, but also may directly lead to formation of the aerosols we sampled.  For each of the 8 penetrations we made through the eye (on 3 flights), very few clouds were present resulting in sunlight penetrating all the way down to the fairly calm ocean water.  Air in the eye is slowly subsiding from aloft and is clean and cool.  New particle formation and growth typically requires these exact conditions; light to promote photochemical reactions, minimal surface area for gases to condense, colder temperatures, and enough time for growth to relevant sizes.  Below are a few pictures from inside the eye. 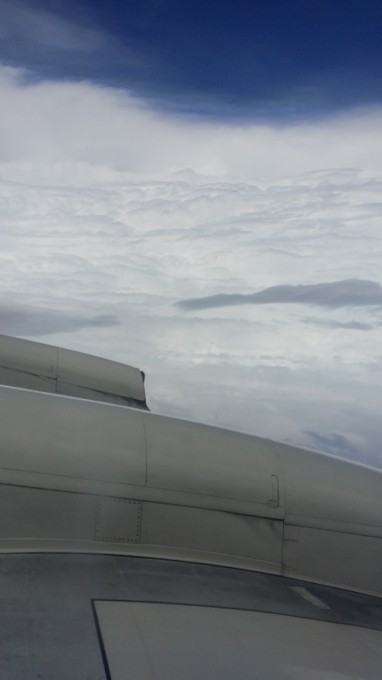 Other scientists on these flights were also taking advantage of this large well-defined eye to test newly developed unmanned aircraft, which can be used to fly in regions of the hurricane that are unsafe for manned aircraft. The link below contains a story and video about the NOAA ‘coyote’:

Next up for LARGE will be sampling from Fairbanks, AK for the ARCTIC FLUX campaign.  While we don’t expect to see hurricanes, this region has interesting aerosol characteristics that offer more exciting scientific opportunities…

This entry was posted on Monday, October 6th, 2014 at 7:07 pm and is filed under LARGE (The Langley Aerosol Research Group Experiment) 2014. You can follow any responses to this entry through the RSS 2.0 feed. Both comments and pings are currently closed.