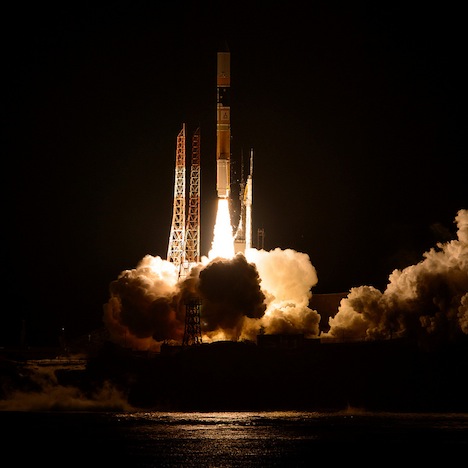 Launches are something special and this one was was spectacular. We were 3 kilometers (1.9 miles) from the launch pad, the absolute minimum safe distance at the Takesaki Observation Stand. The roof doubles as a tiered deck, and lined up at every available railing was a tripod and a camera.

Since we had arrived a couple days in advance, producer Michael Starobin and photographer Bill Ingalls staked out a prime spot early. Down in front was a giant digital countdown clock, and as the hours and then the minutes ticked by, periodic announcements in Japanese and then English came over the loud speaker.

Global Precipitation Measurement, a mission to study rainfall and snowfall around the world, is my third launch. Since I’d been manning the @NASA_Rain account since 11p.m., my head wasn’t in launch mode right away, even when I joined Michael and Bill out at twenty minutes to go. Bill asked me to push a button for one of his cameras, and I was pre-occupied with that for a bit. There’s only so much staring at the rocket pad I could do before the lure of social media pulled me back in to my phone.

But then the last poll came across the speakers at 8 minutes to launch, and then the relentless countdown by a female voice Japanese began. Then it got real.

Across the distance the rocket was lit up on the pad. The countdown continued, a second voice announcing on top of the first — Observatory on internal power — 30 seconds — my heart started pounding as the adrenaline hit — 15 … 10 …  5 — my eyes were bouncing between the clock and the rocket— 4, 3, 2, 1. Zero.

The H-IIA lit up the black of night, bright and beautiful. It was so bright I couldn’t see the rocket at all at first, but then it was rising up and up and up — the rumble reached us some twenty seconds later; you could feel it in your chest — the main engine blazing until it was right overhead. A minute or so in, we could just make out the solid rocket boosters falling away. The rocket kept going, a bright light against the field of stars, going and going for several more minutes until it was just another pinprick in the sky.

Three critical things happen after launch. The first is fairing jettison, when, about four minutes after liftoff, the white nose cone that protects the spacecraft through the atmosphere releases and falls away. Meanwhile, the spacecraft is still attached to the rocket. The second is spacecraft separation, which occurred at a little over 15 minutes. At that point, the rocket was too high to see, so we returned inside to watch it on the telemetry and the camera attached to the rocket.

A whole line of Mitsubishi and JAXA public affairs people were lined up waiting, the press waiting for their reaction. As the only NASA person in the room not holding a camera, the JAXA folks asked me to join them, and we all watched the monitor, waiting for the next minutes to pass. The excitement was high in the room — launch so far had gone flawlessly. Then the black and white rocket cam showed the spacecraft surrounded by black; it had successfully separated and we all grinned and clapped.

A minute later I was back at my computer, checking the @NASA_Rain twitter account, #GPM, and the GPM website for updates, waiting for the next milestone. Solar array deploy complete and collecting power. The GPM Core Observatory was safely in space.

Photos of launch are at NASA HQ Flickr GPM set.
Mission updates are on the front page of www.nasa.gov/gpm

This entry was posted on Thursday, February 27th, 2014 at 7:01 pm and is filed under GPM in Japan, the Road to Launch. You can follow any responses to this entry through the RSS 2.0 feed. Both comments and pings are currently closed.