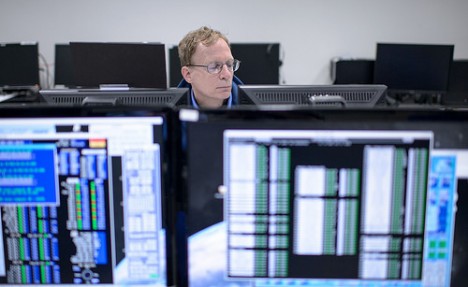 When a satellite gets to space, the first thing it needs to do is check in with those who sent it there. NASA’s David Lassiter is the guy on the other end of the line. “My job is just to make sure E.T. can call,” he said. Responsible for radio frequency communications– RF comms–he’ll be on console the night Global Precipitation Measurement mission’s Core Observatory heads for space.

David is just one part of a large international cast, ready to push open the curtains on something that’s been in production a long time. The running crew has cleared the wings. House managers have checked the doors. On headsets all stations check in, voices clear, sharp, and spare. It’s dress rehearsal, and the combined cast and crew from NASA, the Japan Aerospace Exploration Agency, and Mitsubishi lean into their parts as if it were opening night.

Years of planning, of logistics, of language training and technical coaching and set design, have led this elite corps to the performance precipice. The saying goes that a bad dress rehearsal promises a good opening night, but in this case, nobody in the bifurcated casts spread between Tanegashima, Japan and Goddard Space Flight Center in Greenbelt, Maryland will accept anything less than perfection in the run-thru.

The big show’s opening night is also it’s closing night. This will be a command performance, a one-time-only show of epic proportions attended by senior staff from two proud space-faring agencies. But like all command performances, leaders may have privileged seats but it’s the vast throng of commoners who’s interest make events memorable. Those groundlings are all of us. For a mission focused on global rainfall, the GPM launch is a show for all the people of Earth. 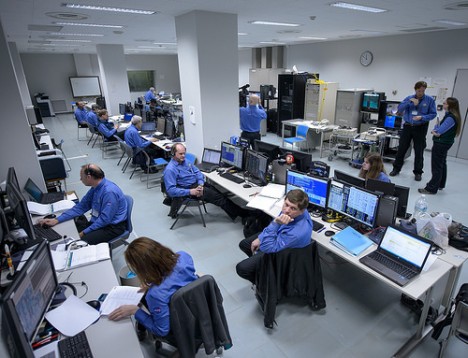 In the control room there’s commotion of a sort, but far, far from the white knuckle derring-do of Hollywood rocket launches. In this rehearsal everyone has their lines down cold, and the consensus is that everyone is hitting their marks on time, on cue. To the non-technical observer there’s a refreshing cool among the corps that instills confidence. Come launch time that confidence and cool will be essential. All participants will have to be on console at launch-minus-10 hours, keeping an eye on every single thing that happens before lift-off. At 30 minutes before launch until 30 minutes after, nobody will enter or leave the control room for any reason whatsoever.

Tim Gruner speaks into a headset, a direct line of communications with the Mission Operations Center at Goddard in Maryland. His voice, along with streams of computer data, flies around the planet to keep all parties on track. It’s nighttime in Maryland during the rehearsal, but during the big show, day and night will be reversed.

Andy Alyward and John Schater have the unusual task of actually standing by at the launch pad. Ostensibly responsible for powering up the GPM Observatory before launch, they’re only on site in case of a problem with the automated computer scripts. At launch-minus-10 hours, they’ll confirm good power, and then high-tail it from the launch site for the safety of control room several miles away. Their oversight is critical because at launch time several systems need to be powered up, including command and data handling, communications receivers, and heaters. Batteries will keep the satellite operational until solar panels unfurl, it tips toward the sun, and starts making its own electricity. 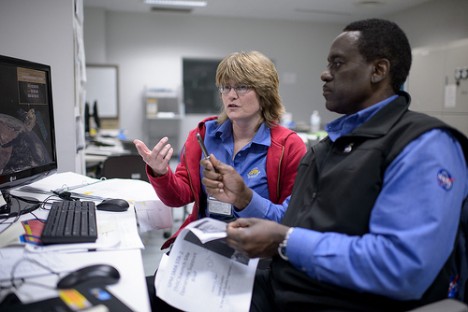 The real action is back at Goddard’s Mission Operations Center and the launch control room located elsewhere at the Tanegashima Space Center. Here in the satellite control room, the group of specialists carefully watching their monitors are largely keeping tabs on their satellite, waiting atop a sleeping Mitsubishi H-IIA heavy lift rocket. Like they say in theater, there’s no such thing as an unimportant role no matter how small. The team here may not be those launching the rocket, but their payload is the big reason this rocket launch matters so very much.

In conversations with the team afterward, the prevailing sentiment is not one of anticipation, but of impending completion. Sure, there’s plenty of excitement, but the NASA team has been in Japan for a long, long time, and home sings its eternally wistful song. There’s nothing like a successful rocket launch to remind you that you just saw a big job through to it’s completion. With this solid rehearsal under their belts, the team is ready to let that moment of completion fly.

This entry was posted on Sunday, February 23rd, 2014 at 9:36 am and is filed under GPM in Japan, the Road to Launch. You can follow any responses to this entry through the RSS 2.0 feed. Both comments and pings are currently closed.