Getting to Kitakyushu Airport

Getting up before the sun on a November morning in Alaska may not be an honest way to represent a person’s effort. The sun doesn’t make much of an appearance at this latitude. The Global Precipitation Measurement mission team traveling to Japan takes that as a charge: we’re not planning to hang around too long, either.

Back on the icy tarmac, we leave our steamy bus for the gelid confines of our twilight passenger cabin, up, up, up the precarious metal ladder to the top of the C5. Then we wait.

Turns out that the plane is fine. It’s the runway that’s too slick with ice.

Engines idling, bellies rumble. Breakfast never happens. The catering we’d expected in the second half of the trip didn’t survive the days of our unexpected Alaskan idyll. People crack a few jokes–how could the overnight quartet of engineers assigned to babysit the satellite have eaten everyone’s pancakes!– but nobody complains. As soon as the Air Force clears us for take off, we’re heading west at full throttle. 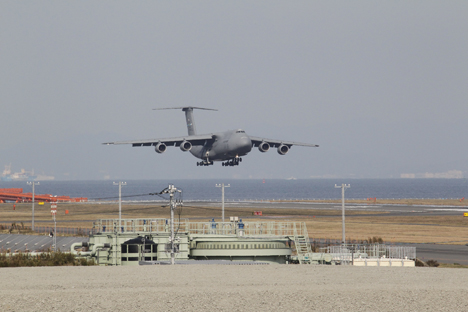 Nine hours above the Pacific, the team settles into zenlike repose. Conversations are minimal due to the ferocious airplane noise and requisite earplugs. Movement slows. Time expands.

Then, after an eternity, we’re on approach. Human dynamos spin up. People run through mental checklists and stretch for action.

Minutes after the wheels stop beneath the gray airplane, people move like springs released. The advance team meets us on the ground with no greater ceremony than high fives and back slaps. In minutes the Japanese and NASA ground teams are rolling at full speed. The C5 nose and tail pops open, and it isn’t long before our truck trailer gets pulled out the plane. Not far behind, the great white box holding the satellite rolls out smoothly, only to be bolted down to the waiting truck bed. 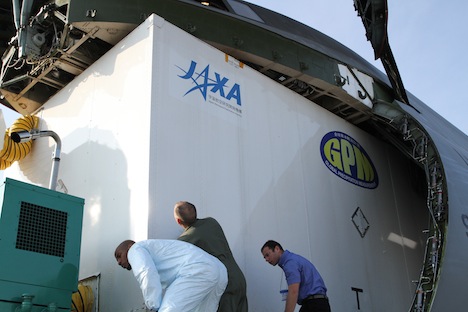 When launched GPM will be the largest Earth Science satellite ever. In its shipping container the school-bus sized vehicle cleared the ceiling of its cargo plane with just an inch of clearance. Credit: NASA / Michael Starobin

From a distance the scene looks like the epitome of an ant colony. Dozens of people with well- coordinated roles clamber and labor over objects many times their individual size, yet collectively manage to make short work of huge jobs. The American team coordinates care and feeding of their spacecraft; the Japanese ground team coordinates movement of heavy objects and extensive runway logistics. A handful of US Air Force crew provide essential assistance working in and around the airplane. 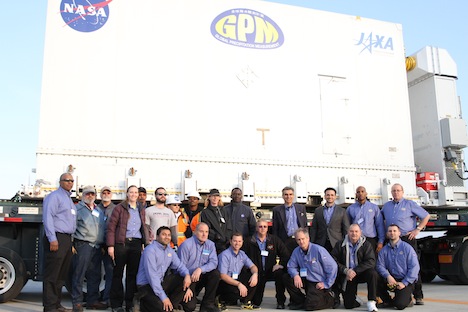 In a little less than three hours, the plane is unloaded, sealed up, and gone. With the satellite now loaded onto the truck, a motley foot parade walks alongside, heading a mile distant for a freshly paved section of sea port, retrofitted specially for this enterprise.

A slow-motion convoy of cars, one big truck, and lots of pedestrians walked alongside the GPM satellite about a mile from the runway at Kitakyushu Airport to the dock area. Credit: NASA / Michael Starobin

The Japanese ground crew performs like Cirque du Soleil; onlookers can only marvel at the display of technical acumen. They make it look easy. The truck pulls up like a demonstration of precision driving. A massive crane, already waiting, hoists a special I-beam into place. Working side by side, NASA mechanics and Japanese ground teams unbolt the satellite, hook lifting chains to the sides, and prepare. As the shades of night stretch shadows long, crews wheel in small, powerful outdoor lamps, turning the scene into an outtake from Close Encounters. 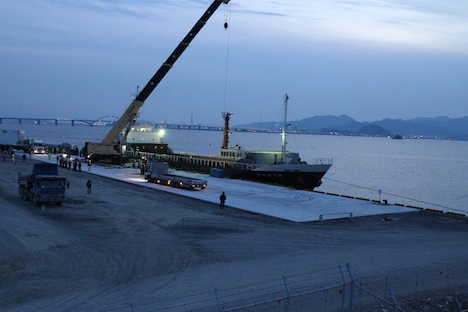 Recent improvements to the Kitakyushu airport in Japan facilitated the transportation of the GPM satellite. A freshly paved concrete staging area supported a massive crane as it lifted the satellite into the cargo hold of an ocean barge. Credit: NASA / Michael Starobin

Then: it rises. The great white box containing the largest Earth science research satellite ever floats above the scene. Gracefully it swings over the edge of a great cargo ship, waiting at port. Then slowly it descends into the hold, disappearing beneath the railing. Another quartet of NASA engineers boards the ship, where together with a Japanese crew they’ll sail for Tanegashima Island. First by air, now by sea, the satellite inches it’s way to space.

Michael Starobin is the Senior Producer at NASA’s Goddard Space Flight Center. Generally in charge of producing “special projects”, Michael’s history with GPM goes back to 2000, when the mission was little more than a stack of formulation sketches. His two short movies about the project are called THE PROMISE OF RAIN and WATER FOR TEA. His latest movie about the mission, WATER FALLS, is scheduled to open on Science On a Sphere screens in January, 2014. (gpm.nasa.gov/waterfalls) Follow him on Twitter @michaelstarobin

This entry was posted on Wednesday, November 27th, 2013 at 8:19 am and is filed under GPM in Japan, the Road to Launch. You can follow any responses to this entry through the RSS 2.0 feed. Both comments and pings are currently closed.