At 4:30 a.m., Nov. 21, a knock came at the door of the Goddard bus from one of our Air Force escorts at Andrews Air Force Base, outside of Washington, D.C. It was time to board the Super Galaxy C5 cargo plane. The NASA team of 24 slowly woke up from the naps most of us were taking while we waited in the warmth of the bus. We arrived at Andrews at midnight for a 2:00 a.m departure that was pushed to 3:30 a.m. then 4:30 a.m. while the C5 crew finished loading and securing the cargo. 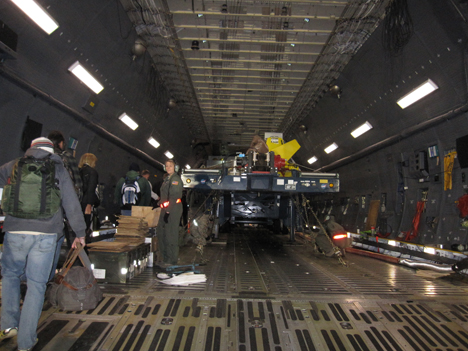 A few people grabbed bags that they hadn’t taken up to the passenger section when we first arrived, and we file up the ramp into the belly of the massive C5. It’s a little bit like I imagine being swallowed by a whale might feel.

When the Global Precipitation Measurement mission’s project manager Art Azarbarzin first told me that in addition to the GPM satellite’s shipping container, we were taking along the roller bed truck, minus the engine, I didn’t know how to picture it in my head. I’d seen the shipping container. I knew it was big, and I couldn’t conceptualize how it and a truck would all fit onto a single aircraft. But the C5 is truly huge, and there the truck was, chained to the deck. 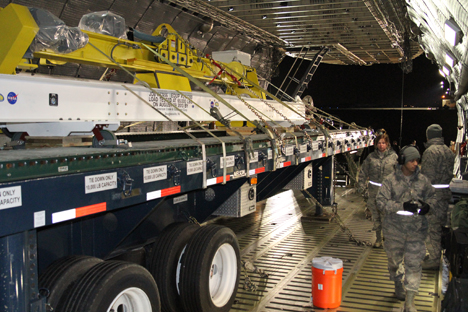 The roller bed truck loaded on the plane. Secured on top are the FlipRight (yellow) for manipulating the spacecraft once it’s in the cleanroom in Japan and the I-beam sling (white) that facilitates the heavy lifting of the container. Credit: NASA / Michael Starobin

Immediately behind the truck at the center of the plane is the GPM shipping container, its top clearing the ceiling by an inch and its width taking up all but two narrow aisles to either side. On each side, sixteen thick chains strapped the shipping container to the deck. They angled up in the walkway, making for a nice tripping hazard to pick our way through. 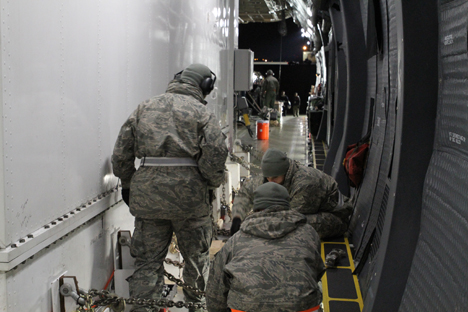 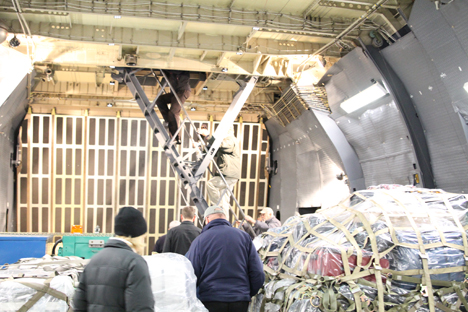 Heading up to the passenger section. Credit: NASA / Michael Starobin

Gripping the railing with two hands, we file up. My first impression was that it is very blue — blue seats, blue floor, blue ceiling and walls. The rows only stretch back about half the length of the plane, three seats to a side. With only 24 of us, those who are working the unloading get first pick of a full row to themselves.

Once everyone gets situated, we get the same FAA safety briefing, you’d get on a commercial flight: Put you seat backs and tray tables in their upright and locked positions. Ours however was read from a manual by a young airman, getting through the words as quickly as possible. When it was time for the demonstrations, we skipped the seatbelt buckle and got a lesson on how to put on what is essentially a bubble over your head that will keep out smoke and provide oxygen in case of a fire.

As the rest of us shut off our electronics, Mike Miller and Neil Patel in the seats across the aisle fired up their laptops. They’re two of the team that monitors the spacecraft inside the shipping container 24/7. An ethernet cable from the sensors in the container stream a constant feed of what’s happening in there — temperature, humidity and vibration — so they can make sure everything is where it should be. They’ll be on for the whole flight.

While we waited for take-off, most of the team sacked out under the blue wool blankets distributed with the noise of the engine muffled by ear plugs. It was cold up there. The only windows are over the four emergency exits so the only way to tell we were moving was the vibrations through the floor and change in pitch from the engines. But it wasn’t long before they roared to life and we were in the air and on our way.

This entry was posted on Tuesday, November 26th, 2013 at 12:09 am and is filed under GPM in Japan, the Road to Launch. You can follow any responses to this entry through the RSS 2.0 feed. Both comments and pings are currently closed.

One Response to “GPM Takes its First (Air) Flight”