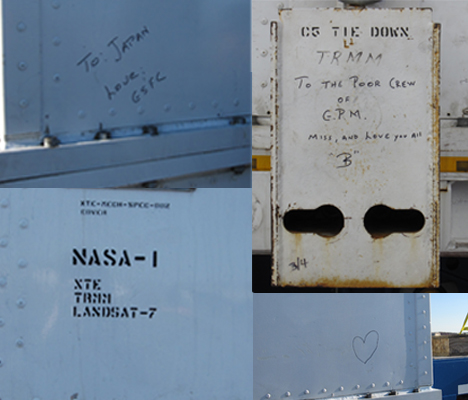 Notes written on the side of the GPM shipping container. Credit: NASA/Ellen Gray

“To: Japan, Love: GSFC.” So says a note, written in black marker on the outside of the Global Precipitation Measurement (GPM) shipping container. This is at least the fourth satellite that has been transported in this particular container. Stenciled officially on another corner are XTE, TRMM, and Landsat-7. Someone on a previous transport team left a note on an external box used to secure the container to the C5 that reads: “To The Poor Crew of GPM. Miss, and Love you All, ‘B’.” On the fourth corner is a small heart.

The day the GPM team loaded this well-loved container and its cargo onto the C5 cargo plane was a long day. It began at Goddard Space Flight Center in Greenbelt, Md. at noon on Nov. 19, beautiful and blustery, and ended at around 2:25 in the morning, dark and bone-chillingly cold at Andrews Air Force Base. Everything moved slowly: the drive from Goddard, the transfer of the shipping container from one truck to another, the loading of the plane.

“Be extremely cautious, take your time,” said mechanical team member Dani Alvarado as he briefed everyone before they got started. “This is the real deal.”

Here are the highlights. 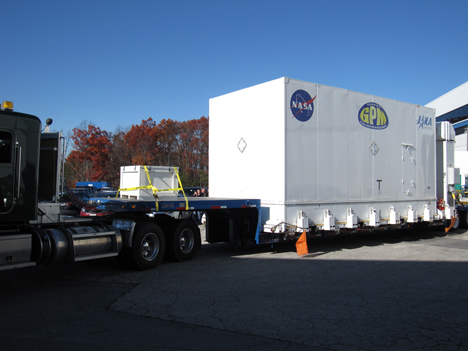 12:00 p.m.
The first leg of GPM’s journey was by truck to Andrews Air Force Base, escorted by a van and a pickup advertising the oversize load. Behind, followed a caravan that included those of us accompanying the satellite. The center section of the truck-trailer carrying the container is only about a foot or so off the ground, so the top of the container was low enough to clear the two underpasses on its route. At first, everyone in the bus trailing behind ducked their head into the aisle to make sure it made it under. It did, just barely. 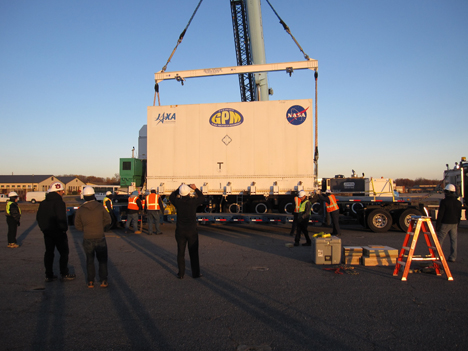 ~4:00 p.m.
Once we arrived at Andrews Air Force Base the first task was to transfer the shipping container from the truck it rode in on to a truck bed covered in rollers. The roller bed, specially designed for NASA satellite transportation, allows the container to move smoothly from the truck to the plane. The roller bed truck followed in the caravan from Goddard, bringing with it two pieces of equipment: a FlipRight machine for moving the satellite around once it arrives in the clean room in Japan and the I-beam sling shown above that attaches to the crane to lift the container. Altogether, the satellite, container, and sling weigh about 62,000 pounds. Up the container went, the first truck drove out from under it, and the roller bed truck backed up under the container in its place.

8:00 p.m.
Originally the C5 was supposed to arrive at 4:30 p.m., but birds on the runway in Dover where it was coming from caused a delay. Since they’re close to a refuge, the Dover base keeps “bird hours,” and can’t take off until they fly away to roost. So the GPM team took a dinner break. The C5 arrived after dark at 6:45 p.m. as three lights on the horizon. It took another hour for the crew to taxi and get the plane ready with its nose in the air, looking like a shark with its jaws open. 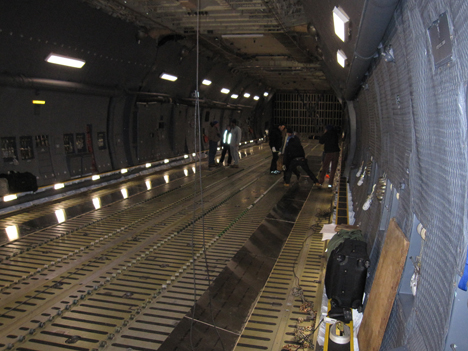 ~8:30 p.m.
As soon as they could, the GPM team got started prepping the plane for the container. The floor of the C5 has rows upon rows of small rollers down the center, but since the container is wide, the GPM team laid down metal covered wood tracks. Next they attached mounts to the outside of the shipping container that would hold roller skates that they put into place as the Air Force crew pulled the container onto the plane with a chain in short bursts. 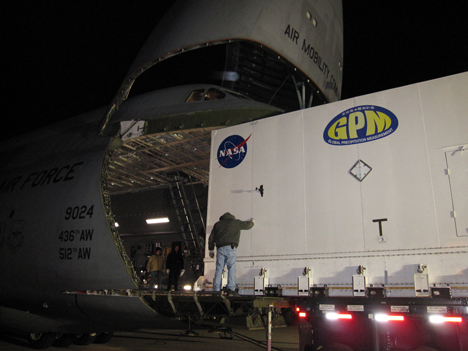 ~10:30
The shipping container is about an inch shorter than the distance from floor to ceiling of the cargo area on the C5. Wiggle room was practically non-existent. The roller truck had to back up, pull out, and back up again to get the container perfectly aligned. The Air Force crew had to adjust the height of the docking platform so the weight of the container shifted directly onto the plane and the container remained level. There were a few false starts, but the container made it on board in the end, looking like it was being swallowed whole. 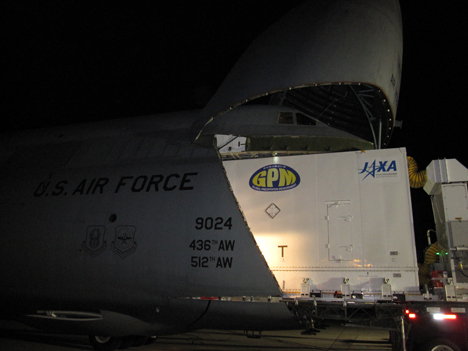 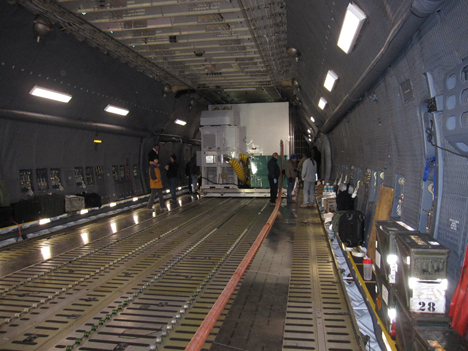 1:10 a.m
Darkness made it hard to fully appreciate the size of the C5, but taking a look inside and seeing the shipping container look small really brought it into perspective.

This entry was posted on Monday, November 25th, 2013 at 11:00 am and is filed under GPM in Japan, the Road to Launch. You can follow any responses to this entry through the RSS 2.0 feed. Both comments and pings are currently closed.