Last Steps Before the Ice

Before the first survey flight of an IceBridge field campaign can get under way a lot of things have to happen. Instruments have to be installed on the plane, researchers need to get into the field and ground stations need to be set up.

IceBridge’s McMurdo-based Antarctic campaign is the result of a year and a half of planning and preparation, all of which came together during a highly choreographed logistical dance that spanned more than a week and half of the globe.

After a nearly four-week-long delay of a few weeks caused by the U.S. government shutdown, IceBridge went into high gear to finish up preparations for a shortened campaign. Before anybody could start on their way to Antarctica the mission’s scientific instruments needed to be installed on the P-3. Over a period of about two weeks, aircraft technicians and instrument team members at NASA’s Wallops Flight Facility in Virginia installed IceBridge’s scientific gear.

While this part of the team was finishing up their work at Wallops, a different group started their journey to the ice, flying to Christchurch, New Zealand, to receive their cold weather gear. While the rest of the IceBridge team was finishing up their work on the P-3 and traveling to the ice, this small group was busy laying the groundwork for the campaign by unpacking shipments, setting up GPS ground stations and preparing for a GPS ground survey of a nearby island. 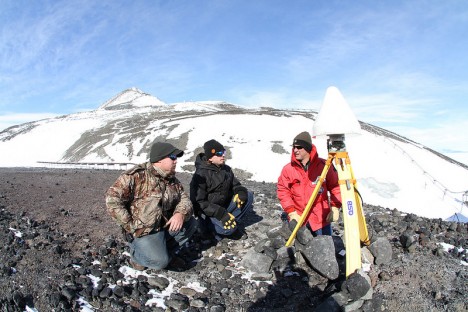 Members of the Airborne Topographic Mapper team, Kyle Krabill, Robbie Russell, and John Sonntag, set up a ground station to help calibrate their GPS systems, a critical step to getting accurate data in the field. Credit: NASA/Jefferson Beck

With instruments installed and ground tests complete, most of the rest of the team packed up for the long flight south. Remaining behind were a handful of instrument specialists and pilots and crew for the P-3. Scientists and instrument operators would travel to Antarctica while the P-3 and its onboard instruments underwent a series of check flights.

With these final checks of the aircraft and instruments complete, the remaining few instrument specialists who remained behind followed the first and second waves of IceBridge personnel on commercial flights to New Zealand. This differs from the mission’s previous campaigns because normally scientists and instrument operators fly on the NASA research aircraft to the field location. 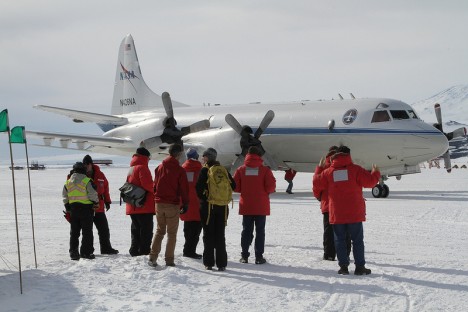 Operation IceBridge team members celebrate as the NASA P-3 aircraft taxis in from its first landing at McMurdo Station’s sea ice runway on Nov. 16th, 2013, Operation IceBridge pilots brought the aircraft over to its parking spot where it will rest between missions to survey Antarctic ice over the next few weeks. Credit: NASA/Jefferson Beck

The reason for the difference this time is that the transit from NASA Wallops to McMurdo Station in Antarctica would take several days. Going to Thule, Greenland, on the P-3 takes less than eight hours and traveling to Punta Arenas, Chile, on the DC-8 takes a 12 hour flight to Santiago followed by a shorter hop to Punta Arenas the next day. But this time, the P-3 would have to make stops in California, Hawaii and American Samoa, flying eight hours each day, before making it to the last stop before the ice in Christchurch.

The P-3’s arrival on Nov. 16 marked the completion of a long and complicated process and the beginning of a new and historic field campaign. For the first time ever a large, wheeled NASA aircraft would operate directly from Antarctica.

This entry was posted on Thursday, November 21st, 2013 at 3:34 pm and is filed under Operation IceBridge, Operation IceBridge: Antarctic 2013. You can follow any responses to this entry through the RSS 2.0 feed. Both comments and pings are currently closed.