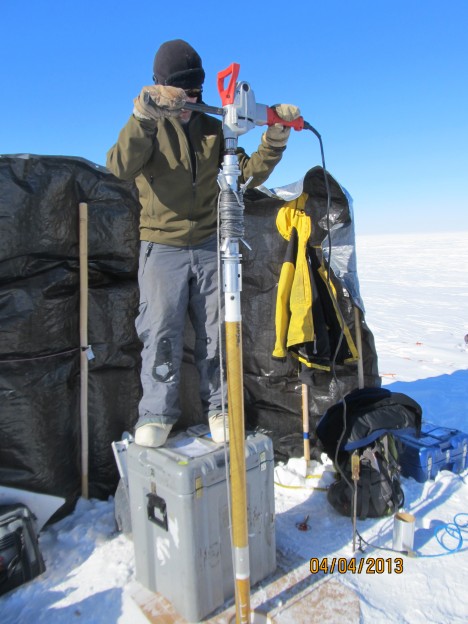 At first we all talked on the phone about it. And then I saw the picture: another driller had drilled into water and, as the drill hung on the surface, there was water dripping from it. Of course that drill quickly froze. So the question was: how do we drill thru the cold snow on top and then into the wet, warm snow/ice below it?

I’ve been drilling into the Greenland ice sheet for nearly 25 years, but I never imagined that there was water down there that didn’t freeze over the cold, dark winter. There have been some deep holes drilled way out in the middle of the ice sheet, all the way to the bottom (about 2 miles deep) and there at the base of the ice sheet the temperatures are near freezing, but not quite there: heat is coming up from the earth, warming the underbelly of the ice sheet. But the newfound aquifer was water that came from the top, melted snow that percolated down the ice. That was surprising to find out, but now the question was how we were going to drill through it.

They told me that their radar showed that the water was between 12 and 25m below the surface. I’ve drilled a lot of holes to that depth with a small lightweight drill that I turned from the surface with a big electric drill. It’s basically a tube with helical plastic strips attached to the outside and cutters at the bottom end. You have to come up about every meter and take the core out and dump the snow cuttings, or “chips”, as we call them. As you get deeper, you add more stem to reach the bottom.

I’ve also drilled ‘warm’ ice with a drill that melts its way down, but that was in the continental United States: in Wyoming, Washington and California. That ice was right at freezing temperature.

So we decided to use both of these drills and make the switch when we felt the time was right. And it worked! It was fun working with the Greenland Aquifer Team, too. 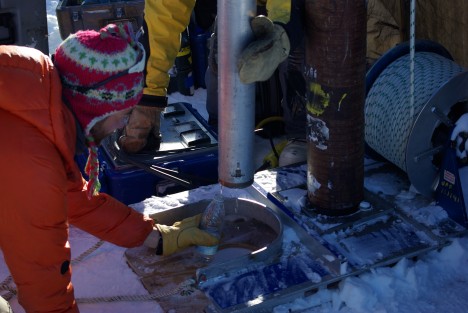 Clem collects some of the water dripping from the drill. 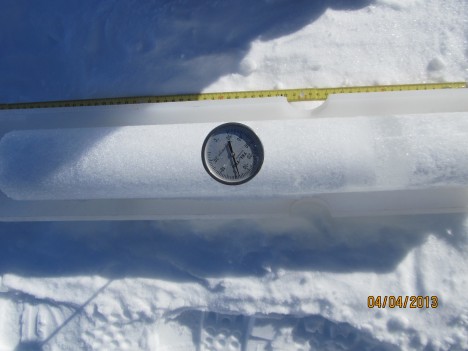 Measuring the temperature of an ice core.

This entry was posted on Monday, April 15th, 2013 at 11:54 am and is filed under Greenland Aquifer Expedition. You can follow any responses to this entry through the RSS 2.0 feed. Both comments and pings are currently closed.

2 Responses to “Drilling Into Water”