Friday, 5 October 2012 — We got a call today from the Commander of the International Space Station (ISS), Sunita “Suni” Williams. Suni, who was calling while the ISS was passing over Eastern Russia, wanted to congratulate us on our SPURS expedition. 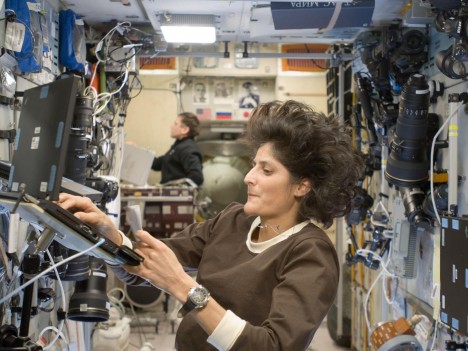 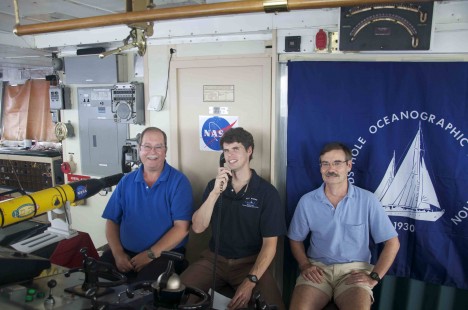 Eric Lindstrom, Adam Seamans, and Ray Schmitt, during call with the ISS.

We had 30 minutes of wide-ranging conversation about life at sea and life in space. We talked about the beautiful sunrises and sunsets viewed from both Knorr and the space station. Suni has the added bonus of seeing the aurora from ISS and the green flash of the sun lasting for an extended period.

We talked about the naming of the new WHOI research vessel after astronaut Neil Armstrong, which will provide yet another link between space and oceanography for years to come. We talked about superstitions on ships and the ISS — no whistling on the ship seems to be a Navy tradition common to both our vessel and the ISS.

The call was a big boost to morale on the Knorr as we suffered through a day of windy and bumpy conditions inflicted by Tropical Storm Oscar. On the good side, we are finished with our primary science tasks and we are riding the wind and waves toward the end of mission in the Azores.

The talk with ISS also is symbolic of the many and growing links between the exploration of the solar system (outer space) and the exploration of the ocean (inner space). As the Physical Oceanography Program Manager at NASA Headquarters, I see the links every day. However, I suspect that, for starters, many of you were unaware that NASA had anything to do with exploring the ocean. So let me fill you in!

I think there are at least three categories of relationships between inner and outer space to tell you about – first is astronaut skills and training, second is the naming and use of spacecraft and ships as exploration and observation platforms, and third are the intersections in science, remote sensing, and robotics for exploration.

Astronauts must train to live and work in a weightless environment. That is quite difficult to find on Earth, but working under water provides a useful analogue because diving can simulate both weightlessness and working in pressure suits.

The Neutral Buoyancy Laboratory at Johnson Space Center is an enormous pool of water for training astronauts. The NBL contains full-sized mock-ups of the International Space Station modules and payloads.

The NOAA Aquarius Reef Base is an underwater habitat used by NASA on a regular basis for astronaut training.

Few humans posses the construction skills needed to build and maintain the International Space Station. To find qualified astronauts for that work, NASA looked to the deep-sea diving community for “the right stuff”.

Naming of Ships and Spacecraft

Naming spacecraft after ships of exploration (for example, the Discovery and Challenger) has been popular and it seems appropriate that oceanographic ships are named after explorers. The replacement for R/V Knorr was just announced and it will be named the R/V Neil Armstrong after the first astronaut to walk on the moon. Maybe this symbolizes a renewed decades-long commitment by NASA to seagoing exploration and discovery?

The space shuttle ushered in a new regular opportunity for astronauts to view and photograph the Earth and ocean. Similarly, oceanographers on ships can observe the same phenomena at sea level to provide in-depth views.

NASA supports the development and use of technologies to explore remote hostile environments across the solar system. Many of these technologies are road tested on Earth in analogue environments, such as deserts, the Arctic, Antarctica, and deep ocean hydrothermal vents. Since we believe there are other oceans in the solar system to explore, like Europa, there is a growing interest in using the Earth’s ocean as a proving ground for remote sensing and robotic technology. This has been going on for more than 30 years.

In 2011, NASA launched the Aquarius mission to study variations in the surface salinity to the ocean. Aquarius senses the ocean at L-band (microwave emissions) in a frequency protected for radio astronomy. There are numerous galactic sources for L-band radiation and these have been well mapped by NASA astronomers. The fact that the radio astronomer’s map is reflected off the sea surface, makes for and interesting connection between the inner and outer space.

For years, oceanographers have been training astronauts for visual observation of the ocean and photography from space, and in turn the astronauts have produced many images of interesting oceanographic phenomena  from above.

In the coming years, ISS will be home to a NASA Physical Oceanography/JPL-constructed instrument to measure winds over the ocean. It’s a follow-on from the QuikSCAT project of 1999 that is still flying today. The new project is known as Rapid Scat and is under development for the Columbus module on ISS.

So that’s a quick tour of some of the inner and outer space connections. The longer this oceanographer works at NASA, the more he discovers. It’s a quite fruitful relationship. It was great to have a Navy Captain in space talking to oceanographers at sea today. Suni William, best of luck on the rest of your mission on International Space Station – and no whistling!

Sunset on the Sargasso Sea.

This entry was posted on Tuesday, October 9th, 2012 at 11:11 am and is filed under Salinity Processes in the Upper Ocean Regional Study (SPURS). You can follow any responses to this entry through the RSS 2.0 feed. Both comments and pings are currently closed.