We had a whirlwind of preparations after the Labor Day Weekend.  All the gear was loaded on the ship and lashed down. The scientific party (22 people) arrived and set up in various spaces around the ship.  Bill Ingalls, a NASA Headquarters photographer, captured many great shots of the Knorr and the equipment. His photos are online at NASA Headquarter’s Flickr account. 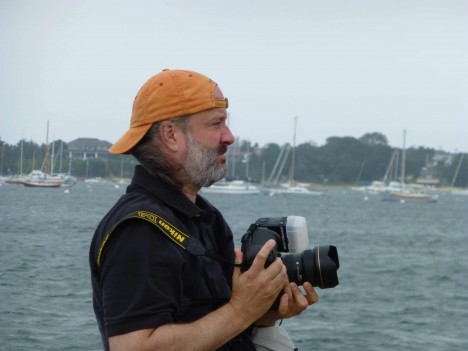 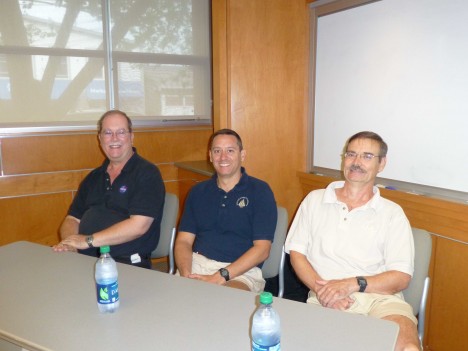 I also had the pleasure of meeting Naomi Harper, a teacher from Will Rodgers Middle School in Fair Oaks, CA. She was visiting Woods Hole and stopped by the ship. I am looking forward to interacting with her students via this blog during the voyage.

We cast off and set sail at 8:30 a.m., on Thursday, Sept. 6. While it’s a very beautiful calm day, we know that we have storms in the Atlantic between us and our destination (Hurricanes Leslie and Michael). The cruise plan is being adjusted a little so we spend the first few days focused on “outrunning” the storms. We can do out test stations and other such preparations after we have reached calmer waters west of the hurricanes. So, we are expecting rough seas at some points during the next few days and the first order of business as we set sail is to get all our gear secure on deck and in our cabins. Everything that can move needs to be secured before we face the storm waves.

There was a nice gathering of friends and family at the wharf to see us off on our voyage. We are lucky to have such a beautiful sunny morning and calm winds for the send-off.

Family and friends of the SPURS researchers gather at the Woods Hole dock to see the cruise off.

Thirty minutes after setting off from Woods Hole, we have our first meeting of the entire scientific party. There are people from several institutions and we all need to put names to faces. There are also scheduled safety meetings and boat drills during our first day and before we leave the calm waters of Massachusetts behind. 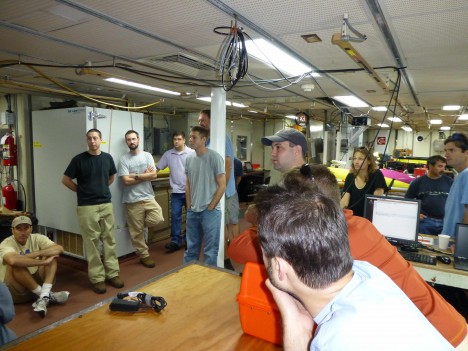 The first SPURS science meeting aboard the R/V Knorr.

The only scientific work planned for the first few days, as we race past the storms, is regular sampling of surface waters to calibrate the ship’s thermosalinograph. This instrument monitors ocean temperature and salinity continuously from water coming in through a port in the ship’s hull. It will operate continuously during the voyage, but we need to collect calibration samples every 4 hours for precision salinity determination.

We are all learning about the rhythms of shipboard life. We will have people on many different watch schedules. The watches will operate on local time. That shifts as we move east across time zones. As your blogger on the SPURS cruise, I plan to float across different groups and schedules as the expedition progresses to give you multiple perspectives. On the ship, meal times are very important. We will have breakfast every day from 7:30 to 8:15 a.m., lunch from 11:30 a.m. to 12:15 p.m., and dinner from 5:00 to 5:45 p.m. I’ll let you know more about the delicacies we eat at sea!

This entry was posted on Friday, September 7th, 2012 at 12:21 pm and is filed under Salinity Processes in the Upper Ocean Regional Study (SPURS). You can follow any responses to this entry through the RSS 2.0 feed. Both comments and pings are currently closed.