Cloudy skies over the Atlantic, with Hurricane Leslie in the distance.

We knew when we left Woods Hole yesterday that we had two hurricanes (Leslie and Michael) standing between us and our study site, far southeast of Woods Hole in the mid-Atlantic. How Captain Adam of the Knorr chooses to deal with this over the next days is a study in weather and ocean forecasting – and calculated risks. We considered at least three options: delay departure until the coast is clear, make a significant departure to the cruise track (sail far south, then east), or leave on time but travel quickly to the east and then south to miss the worst of the hurricane weather.

The last option is what we are doing. We abandoned plans to do test stations and do science training for a few days so we can make hast to the east, to the east side of Leslie’s track. Then we can make our way south and around Michael. Tom Farrar and Fred Bingham of the SPURS science team have provided the bridge with Gulf Stream analyses that we hope will help us take best advantage of ocean currents in our race eastward. We could easily have found ourselves in an eddy that would hinder our progress, and no one wants that with bad weather coming toward us! It was a fabulous start to the voyage to have the crew of the Knorr and the SPURS team working so closely on the strategy to both keep us safe and on schedule. 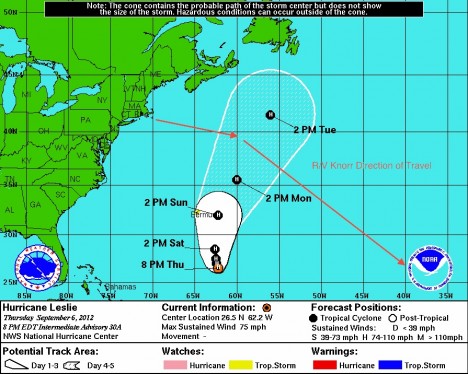 It’s worth mentioning too that satellite data and the shore-based team play a crucial role in our cruise planning. Zhinjin Li and Michelle Gierach at the NASA Jet Propulsion Lab have been feeding us the latest satellite images from the Atlantic so we can better understand the wind, waves, and currents in our path. We rely on these contributions because it is difficult to surf the web from sea – we have Internet access, but it can be quite slow.

Today we feel the enormous forces of the tropical storms on the western Atlantic. There is a good swell running – speaking clearly of some strong wind at a distance. Some aboard are feeling seasick, but the mess is still full of hearty eaters and smiling faces!

One of the things you notice in these conditions are all the items that can shake, rattle, squeak, groan, or otherwise move and make noise. I have been up and down in my cabin a number of times during the night to silence rattling cupboard doors, toppling books, sliding glasses – it’s almost an endless battle. At sea you don’t just put something down – you secure something, wedge something, pad something, or it becomes something broken, lost, dangerous or just plain noisy! Sometimes one even has to wedge oneself in a place and just stop moving around! All of us have greater appreciation than most for the stability of land and the silence that stability brings. When things are shipshape, all is secure and in its place. We are living shipshape today.

This entry was posted on Friday, September 7th, 2012 at 3:10 pm and is filed under Salinity Processes in the Upper Ocean Regional Study (SPURS). You can follow any responses to this entry through the RSS 2.0 feed. Both comments and pings are currently closed.