Tonight, I’m calling in from my tent.  I’m not going to bed – I’ve turned it into an office, because it makes it easier to work on the computer and the data terminal if I’m shaded from the sun.  The data terminal is proving to be very fickle, and very frustrating. Last night I stayed up until midnight trying to get it working, so I could send photos forward, but no dice.  I got up early, and was fighting with it again at 6:30 in the morning.  Everything looked fine – I had a strong signal, the registration looked fine, but every time I went to open up my mail, the internet would quit, so no photos.  Just now, I did all the same things I did yesterday and this morning – but it works today. I have no idea why.  Unfortunately, now my camera is out of batteries, so I can’t send photos until I get it charged up.  It seems pretty hard to get photos from Siberia! 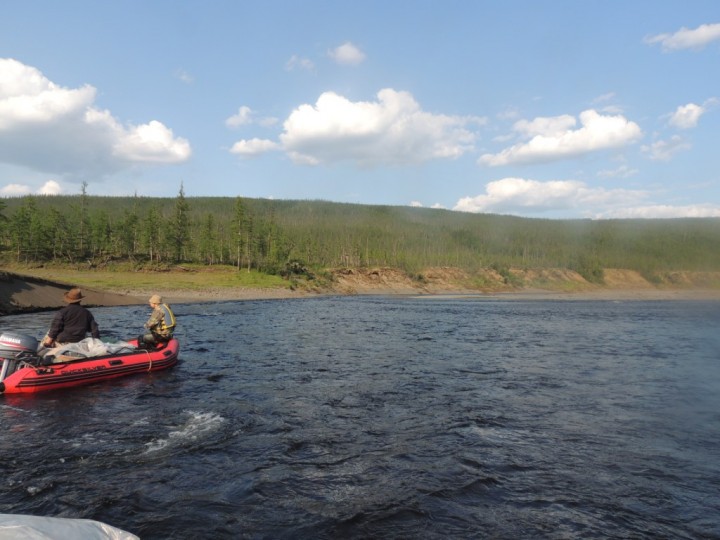 As the scientists move downriver towards Tura, the forests show more signs of fires in the recent past. The hillside here is covered with tall bare tree trunks, with some green regeneration mixed in. A fire passed through here years ago, killing the large trees, which still stand as the young trees begin to grow.

We spent over ten hours today riding down the Embenchime.  We traveled about 58 kilometers (about 36 miles) today, straight line distance.  We estimate more like 90 kilometers (55 miles) actually travelled on the Embenchime.  I had the job of sitting in the middle boat, so I got a break, and didn’t have to paddle.  The guys in the middle boat get to sit on the containers that hold the gasoline.  It kind of nice to have a seat to perch on, but the gas cans aren’t very soft.  After a while, it can be hard to find a position that is comfortable.

Before we set out on our journey this morning, we broke camp, packed up all our gear, and had a bite of breakfast.  I had oatmeal – a good, healthy hot breakfast.   Then I started working on trying to get the internet connection working, and Slava went out in the woods to look for fire return data samples.  After I gave up on the data terminal, I went out to find Slava, and helped with his study sampling for about an hour or so.

We recently wrote a paper based on the hypothesis that trees will accelerate their growth after a fire, because the fire kills competition.  With the competition dead, the trees that survive the fire should be able to grow more quickly.  We judge accelerated growth by an increase in the size of the growth rings.  We are still collecting data to study that hypothesis, so looking for areas where we there were visible burn scars on trees, and we would collect both scarred and non-scarred samples from trees that should have been living at the time of the fire.  Back in Krasnoyarsk, these samples will be compared and the rings analyzed to see if growth was indeed accelerated after the fire.

We met our travel goal.  We made it all the way downriver to the plot we call Box 16, and Box 17 is just down river.  These are our last main areas to collect GLAS footprint data.  We were worried that the river conditions wouldn’t allow us to get here until tomorrow afternoon – and that would have cut heavily into our sampling time.  But we’ve made up time, and we are back on schedule.  We are very happy now, and tomorrow, we are going to hit this area really hard, to get all the samples we need.

The Embenchime is a well behaved river now, for the most part.  There were a few hard turns where we scraped the bottom of the boat.  We did have to bail water, but that is becoming routine now, and we hardly worry about it.  We will have to repair a boat, but again, that is just routine now.   Overall, however, the Embenchime let us pass in fairly good shape today. 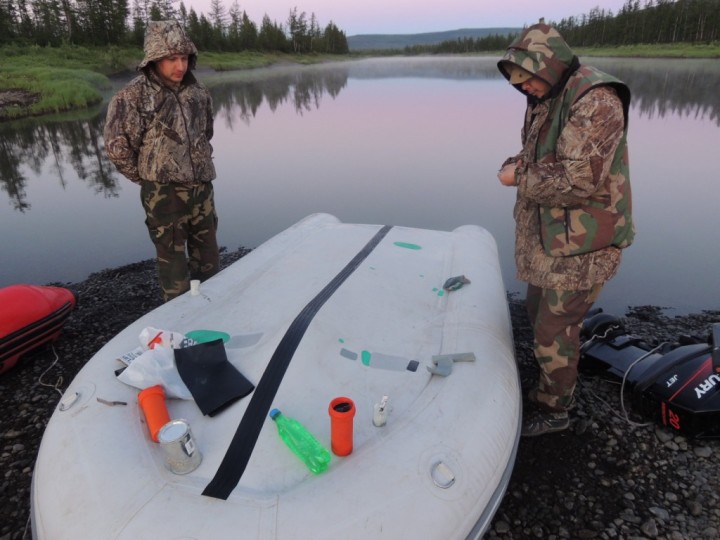 The Embenchime River is running a little higher now, due to recent rains and the inflow from a few small tributaries. The river still holds shallow areas and “dragon’s teeth” – sharp rocks – that must be passed over. Each night Sergei and Pasha pull the boats out of the water and repair the damage, in preparation for the next day’s journey.

As we travel downriver, we learn tricks to make our passage easier.  We started out with the boats tethered together in a long line.  That wasn’t working so well in the rapids and shallows.  The lead and back boat (the red and white ones) carry motors, and have a little steering capacity, but the middle boat is just pulled along.  The all-in-a-line configuration has worked just fine in deeper water the past years, but here, the middle boat proved to be a problem, because it was very hard to get it around the rocks and riffles.

What we’ve done is move the back boat forward and tie it right next to the middle boat.  The white boat, with the motor, can then help our motorless “barge” boat get through the channels and turns.  It actually helps a great deal.

The boats are roped together pretty closely, with just a narrow gap between the sides.  So between the boats there is a lot of turbulence in the water.  Ross started looking at the water, and said something about it looking like a washing machine.  Pretty soon, he had tied his dirty shirt onto a rope and dropped it into the “washing machine”.   It started looking like a good idea to me, so I took a pair of socks and let them drag into the water too.  So while we motored downriver, Ross and I did our laundry.  It actually worked quite well.

Everyone is in a good mood.  Ross and I were pleased with our clean clothes.  Gouqing travels fairly quietly, but smiles and says he is doing well.  The two young Russians, Sergei and Pasha, manned the paddles today – one in the lead boat with Slava and one in the back boat.  Ross and I also kept checking the GPS to make sure we always knew where we were.

We are camping on another rocky beach. It’s not as painful as some camps, but it is still rock.  We’ll measure up to 10 plots tomorrow, then load the boats and move downstream to our next measurement area.  We have two days of measurement left – and then we will head to Tura. 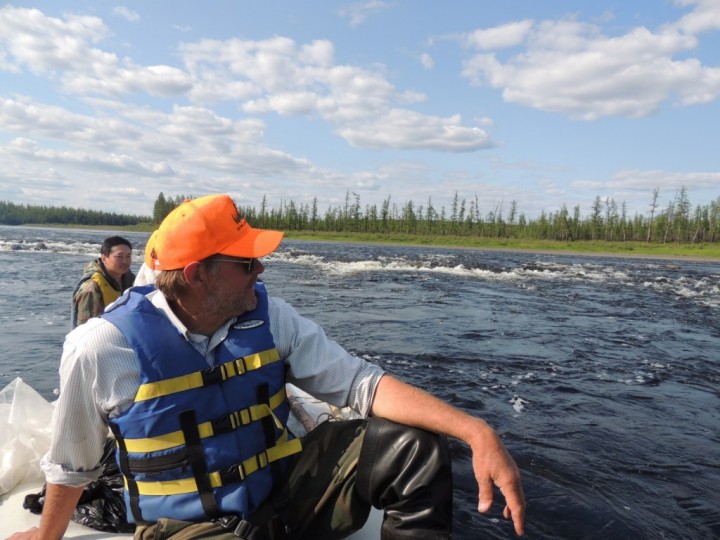 Ross surveys the scenery from his perch atop the gas cans in the middle boat.

We saw loons today, and geese.  I thought I saw a brown bird that looked like a heron of some type. It had the body shape of a green heron but it was brown.  We came across a place where fox tracks intermingled with goose tracks.  It looked like an interesting story there – but there were not enough clues to tell that tale.

We were pestered by giant horse flies.  Repellant works against them, but they are noisy and annoying.  The best thing about the flies is that they seem to make the mosquitoes back off.   The main thing we observed today was a lot of trees.  That’s the main thing you see here – lots and lots of trees.  As we head downstream, the trees appear bigger.  And you see signs of past fire everywhere.  There were some spruce cones lying around, and a lot of landslides and slumps, where the permafrost melts and the soil gives way and all the trees fall into the river. These are all signs of warming – bigger trees, more fires, more spruce and permafrost degradation.   As we move downriver, we can see change.   Tomorrow, we’ll be out in the forest again, taking a closer look.

This entry was posted on Wednesday, July 18th, 2012 at 11:41 am and is filed under Siberia 2012 – Embenchime River Expedition. You can follow any responses to this entry through the RSS 2.0 feed. Both comments and pings are currently closed.