Today we chugged down the river.  We’re heading towards the junction of the Embenchime and the Kochechum Rivers.  Just before we get there, we have a series of plots we really want to measure. That confluence is still a long way away – about 75 kilometers, or just under 50 miles, in a straight line.  Because of the twists in the river, that means we’ll travel 1 ½ times that much. I heard we are now averaging about 6 ½ miles per hour.   Compared to other days, that’s pretty brisk. 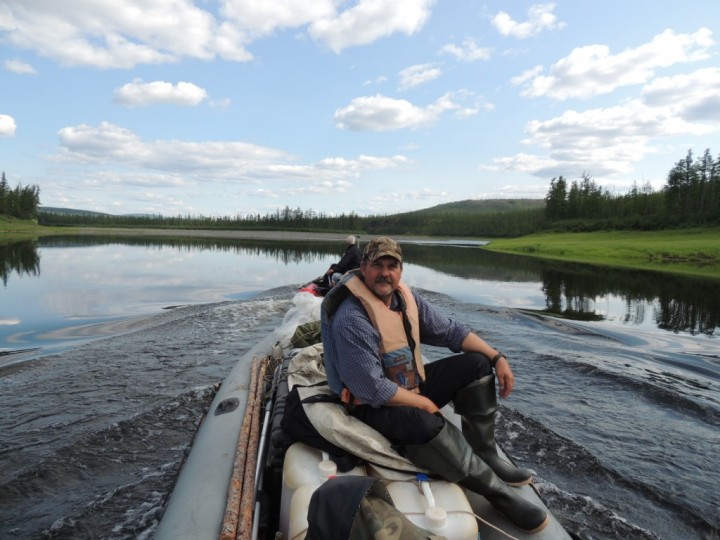 The rising river level allowed for easier passage along the Embenchime today. Here Jon rides in the front of the middle boat. He is sitting on tanks filled with gasoline.

The water level has risen, thanks to the rains.  There are still riffles and shallow water at most turns.  We still have to get out and haul the boats over the shallows.  We still hurt our boats on the sharp rocks, too.  We tore the bottom of the white boat again.  So, we still make repairs every night.  But – we’re making progress.  It’s still hard – but it’s better.

Our next goal is what we call Plot 16 and 17.  These areas looked like they had a lot of accessible GLAS footprints, and we think it will also be good for the G-LiHT measurements.  We’ll spend about a day and a half there, working our little hearts out, to get all the data we can acquire.  Then it will be full bore to Tura to try to reach our plane by July 23.   That sounds so dramatic, “full bore”, like we’re in cigarette boats and going to fly down this river!  Not quite – we’ll be in our rubber boats, chugging along.

Today we saw our first spruce.  Spruce like warmer and milder conditions than larch, and can’t survive in the farthest northern regions.  In recent times, however, spruce is moving further north and at higher elevations in many places.  Slava has said that, in the valley to the south of this one, he has seen some spruce growing.  But he did not know it was growing in the Embenchime valley.

We are only seeing a few spruce, here and there.  We have seen them on the southeastern part of the river, the sunny side of the river.  I confirmed a small tree, maybe 10-15 years old, growing right on the southeastern shore.  We also believe we saw some older trees, further upriver.  But they were distant and we didn’t have time to stop and confirm. 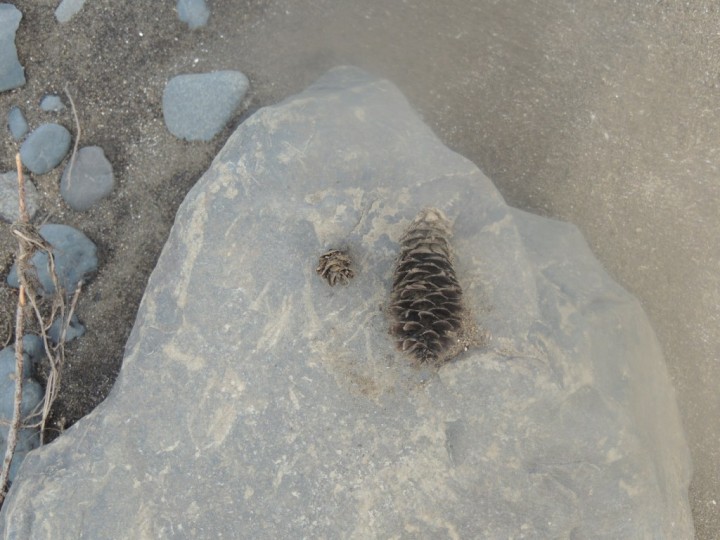 Siberian spruce and Siberian Larch are both conifers, and both carry their seeds in cones. The larch cone (left) is small and has small, winged seeds. The spruce has a larger cone. Spruces, which are dark-needled conifers and retain their needles all winter, cannot live in the extreme climates that suit the deciduous Larch. Spruce has recently begun to be found living further north and at higher elevations than its historic range.

When Siberian spruce (Picea obovata) begins to grow where only larch once grew, it suggests a warming climate.  Larch is an extremely hardy tree, and lives in harsh, cold, dry and wind-blown conditions where no other tree can live.  It is also very shallow-rooted, so it is well adapted to the far north, where permafrost keeps the land just under the surface frozen year round.  Spruce wants to root more deeply, than is possible in frozen soil, so they don’t do well in permafrost.  When spruce encroaches on larch, it can be a clue to permafrost melting underground.

As we move further south, we see other signs suggestive permafrost degradation.  We’ve seen a few areas of “drunken forest”.  That’s a rather poetic term for a forest stand where the trees no longer stand upright, but lean at odd angles – some to the right, some to the left.  This odd-angled forest gives the appearance, I guess, of a group of drunks walking home from the bar, unable to stand up straight.  I don’t know about that, but I do know that drunken forests have nothing to do with alcohol.  It has to do with soil.  Where the permafrost melts and the soil warms, the shallow roots can no longer hold up the taller trees, so they “slip”, ending up growing at odd angles. 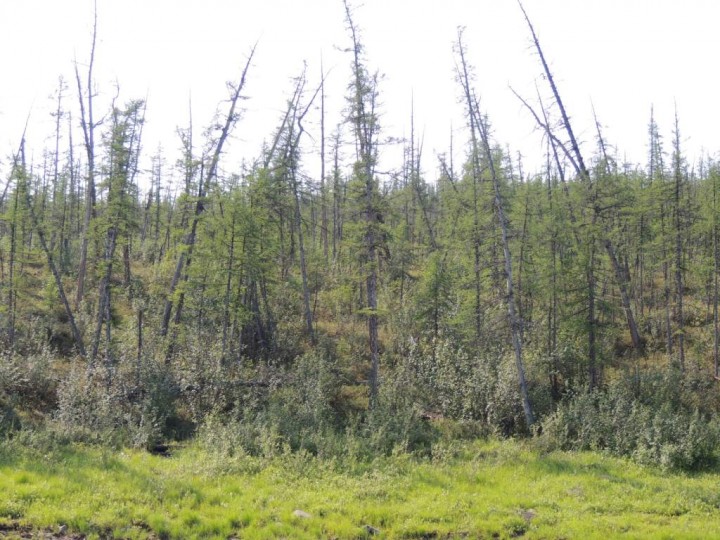 Larch trees have shallow root systems, and often grown in thin layers of soil that lay above permafrost. When permafrost begins to melt, the soil begins to shift and can no longer support the trees. As a result, the trees begin to lean, usually in various directions. This is known as a “drunken forest”, because the trees can no longer stand upright.

We also are seeing slumps and landslides along this section of the river.  When permafrost lies below a layer of soil, that permafrost is frozen and firm – and it doesn’t easily shift or slide.  As it melts, however, the soil layer deepens and becomes moist and soft.  The weight of the trees and vegetation can make the soil sink or slide, depending on topography and soil depth.  If the slope is steep, large landslides can occur as permafrost melts.  We’re seeing both slumps (small sagging areas) and landslides as we move downriver.

There was a very curious thing I saw yesterday.  I saw a little bird, with speckles on its breast and a fairly heavy bill.  I thought it looked like a thrush of some type.  It was a remarkable little bird, so I spoke to Slava about it.  He said I had described a “Cedar Bird”, so he thinks that is what I must have seen.

The Cedar Bird is a curious little bird, and if that’s what I saw, it’s even more curious that one is flying around this far north. It has a symbiotic relationship with the Siberian pine, a southerly species of tree. “Cedar Bird” is a local name.  The scientific name is Nucifraga caryocatactes and is better known as the Siberian Nutcracker or Spotted Nutcracker.  Its favorite food is the seed, or nut, of pine trees.  The Siberian pine has a large seed, and it is eaten by the locals as a tasty delicacy.  The Cedar Bird competes with people for this resource – so sometimes locals aren’t too fond of Cedar Birds.  They are friends of the pine, however, because the bird loves the pine nuts so much it gathers a lot more than it can eat, and caches the excess to come back to at a later time.  Oftentimes, the cached nuts are forgotten – and new pines can grow from them, often far from the original seed tree.  The Cedar Bird really helps expand the distribution of Siberian pine.

The thing is – this is not where pine lives.  The climate is much too harsh.  But the cedar bird is very tightly associated with pine forests – it does not like to each much else.  The one I saw might be a just-passing-through migrant.  Or I might have seen something else. But if it was a Cedar Bird, then does that mean pine are also close?  Or is adapting to eat the seeds of spruce, as well?  I have no idea – but these seem to be interesting questions to ponder.

I’ve also seen some interesting bird behavior here.  We’ve seen quite a few geese here.  I believe they are a type of Bean Goose – small, active brown geese that live in Asia and Europe.  They are breeding here, and are swimming along in multi-family groups, with several adults taking care of a large group of chicks, in what looks like cooperative parenting.   When we get too close to a group, one of the adults will rise up and start running across the water, thrashing its wings on the surface and making quite a show.   Meanwhile, some of the other ducks – we like to call these the “nanny ducks” – quickly and quietly herd the little ones into a group, and shoo them to the river side, where they all run up the bank then suddenly all disappear in the woods.  About that time, the distractor duck finally gets aloft and flys away.  We’ve seen this happen repeatedly.  It’s an interesting survival strategy.

Yesterday we went by a hunter’s cabin.  As remote as we are, civilization is not very far away, and people do use these forests frequently.  The cabin was well kept, and it looked like it has been recently used.  I am told that this area is well-loved by hunters, especially in the fall and winter. They will trap sable, hunt caribou, and probably will be gunning for the geese and ducks that we’ve been seeing, too.

The hunter had a nice, nearly new, snowmobile sitting in a shed, waiting for him to come back this winter.  I couldn’t image how someone could get a snowmobile up here – the river is too shallow to allow shipping, and there are no roads nearby.  Slava said he most likely waited until the river was solidly frozen in the winter, and then rode the snowmobile up from Tura. That would be over 300 kilometers (190 miles or so), on snowmobile in the middle of the Siberian winter.  Doesn’t sound like that much fun to me. I’ll stick to summer, even if the river does run shallow at times! 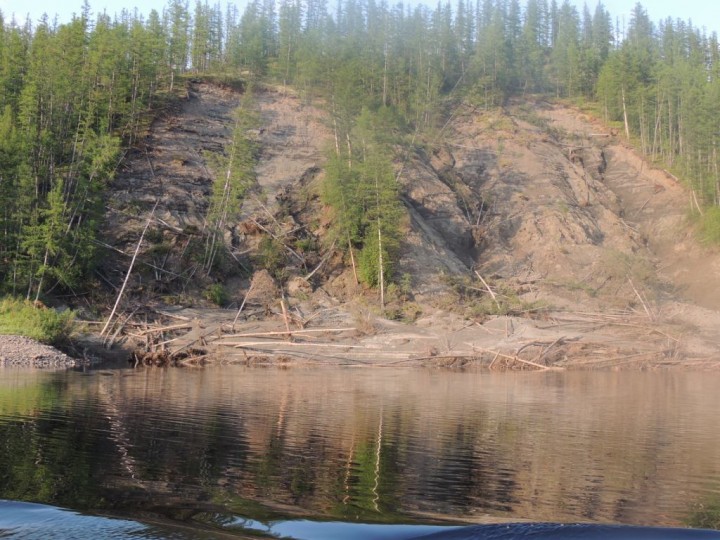 A landslide. As permafrost begins to melt, the land becomes unstable. When this happens on hillsides, the topsoil and trees often end up sliding downhill, as in this image. As the team heads down the Embenchime, sights such as this are becoming more common, especially on the sunnier south side of the river.

We’ve seen clear evidence that the shallow, sleepy Embenchime, as we have experienced it this trip, can run both deep and furious.  This river will freeze in the wintertime, when temperatures plummet and snow piles up all around. In the springtime, as the warming sun rises higher in the sky, the snow begins to melt and the ice cracks.  The runoff raises the Embenchime, and it pours down from the mountains into the Kochechum very high, carrying chunks of sharp ice as it roils along.  That ice scrapes the barks of the trees as it passes, and a trail of scars can be found along the river.  These scars are about 10 feet high in some places – way over my head.  The idea of this little river flowing that high, that fast is hard to imagine, but the proof is here. I’m sure it would be quite a sight to see in the melting springtime.

Our food has become more about noodles and canned meat than fresh fish.  Slava caught a nice pike, but other than that we haven’t seen much fish since the river started to rise.  I haven’t had much desire to go fishing this trip, but it would be good to have fresh protein, so I will gather up my fishing gear and try to help out before bed tonight.  We did eat some fish today – from a can.  We had meat and beans and ikra – all out of cans, too, for lunch.  It was a no-frills affair.  We each had a spoon, and we had a variety of different cans opened, and all shared.  That’s how lunch is done, sometimes, on the river when you are trying hard to make time.  I’d rather eat cold canned food than miss my airplane – or miss meeting our measurement goals.

This entry was posted on Tuesday, July 17th, 2012 at 8:42 pm and is filed under Siberia 2012 – Embenchime River Expedition. You can follow any responses to this entry through the RSS 2.0 feed. Both comments and pings are currently closed.