Siberia 2012: A Slow and Smoky Arrival

We have arrived!  We are now Tura, at our home away from home, at the field camp.   It’s been a long journey, but here we are – on the brink of starting our days on the Embenchime River.  And I’m buzzed – I can’t wait to get out and get started.  We are so very ready to go! 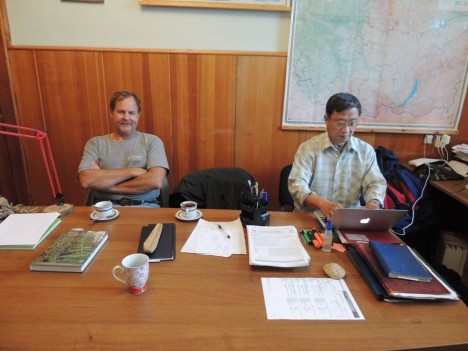 Despite flight delays due to forest fires burning across central Russia, the NASA team safely arrived in Krasnoyarsk only a few hours late. Additional delays slowed their arrival at Tura, costing them at least a half-day’s work in the field. Here Ross Nelson (left) and Guoqing Sun (right) work in the offices of the Sukachev Forest Institute.

Ross Nelson and I boarded an airplane in Dulles airport, in Virginia, on July 5, looking forward to a very long 26-hour trip from home to Krasnoyarsk.  The flights were smooth, and landed in Moscow and St. Petersburg on time.  Stoked that things were going so well, we heard the bad news – our flight to Krasnoyarsk had been delayed for several hours. That was inconvenient.

Soon we heard that our flight to Tura, schedule to arrive here on July 9, had also been delayed.  That was bad news, indeed. We needed to arrive in Tura early morning on July 9- today-  in order to make our connection with the waiting helicopter.  We wanted to make that connection so we could get right to work.

But no luck. We would arrive in Tura too late for our helicopter.  We weren’t losing hours – we were losing a full day of work.  Our schedules are quite tight now, but I believe we can still make the necessary measurements and end our expedition with just enough time to make our flights back to America.

The flight delays were caused by smoke from a large number of forest fires that are burning across central Russia.  Coming from St. Petersburg to Krasnoyarsk on July 6, we were high-flying witnesses to a smoky scene.  At 33,000 feet, our airspace was smoke-free. But a thick blanket of smoke hung over much of the land below.  Smoke also rose into the upper atmosphere.  Smoke that high can travel long distances – some might even make it across the ocean to North America soon. 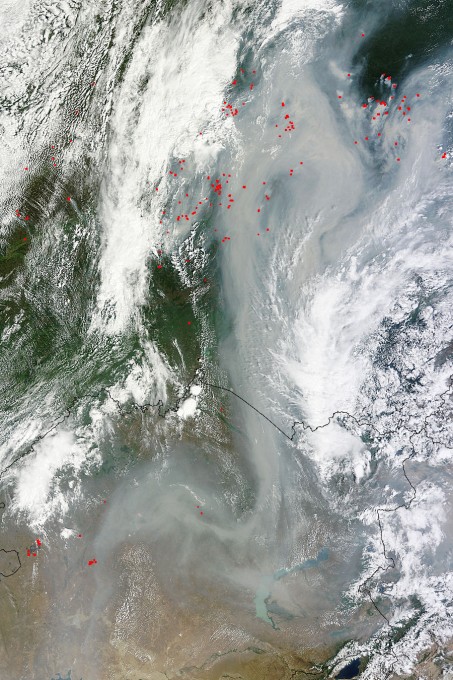 The Moderate Resolution Imaging Spectroradiometer (MODIS) aboard the Terra satellite flew over central Russia on July 6, 2012, capturing this view of a curving river of smoke obscuring the land. Just a few hours later, Jon Ranson and Ross Nelson flew across the same area. Moscow and St. Petersburg lie off the western edge of the image. Krasnoyarsk lies just off the eastern edge. Tomsk, the point of departure for the 2010 Expedition, lies under a thick blanket of smoke in the upper third of the image. Active fires burn north of Tomsk, near or in the forests studied in 2010. The southwestern corner of the Embenchime River study site lies very close to the northeastern corner of this map – the only area which appears smoke and fire-free.

We left St. Petersburg near sunset, with the sun low on the horizon.  Smoky sunsets create very red skies, and the colors were pretty spectacular. It reminded me of the sunsets I saw just a few weeks ago when I visited Greely, Colorado. I was close to the High Park fire, and the sky was an amazing, blazing orange at sunset.  That was only one fire, however.  Dozens, or maybe hundreds, that colored the sky on July 6, as we passed above the smoke.

We flew over a huge, curving river of thick smoke.  It truly looked like a river, flowing, I think, generally north to south. We passed over it from west to east. As the sun set and the light dimmed, I could see the glow from some active fires.  As we passed near the Ob River, in the vicinity of our 2010 expedition, dark plumes of smoke rose high in the sky.

In another spot, I believe within an hour of Krasnoyarsk, we flew over a huge burn scar.  It was really stunning.  I was on the left side of the plane, and this scar extended way to the north, maybe even to the Arctic Sea. It took us several minutes to fly over it, so I’m estimating the scar was around 100 km across.  Just massive.

We landed in Krasnoyarsk after sunrise, on the morning of July 7.  Slava greeted us in the airport, and then we made our way to the House for Scientists, where we had hoped to sleep for a few hours.  After thirty hours of travel, and with a good half-day of work ahead of us, we certainly needed a rest.  When I lay down, however, my eyes were open and my mind racing.  I remember thinking “Wow, I’m totally wide awake.  I’ll never get to sleep!”  And then, it seemed instantly, I was opening my eyes and it was four hours later.  I guess I was truly exhausted!

Hard rains came in our first night in Krasnoyarsk, and they washed away some of the smoke.  Slava tells me that this is the first rain in a month.  It has been both hot and dry so far this year.  When I arrived, it felt like a typical Maryland summer day – hazy, hot and humid, with the temperature hovering around 80°F.  But this is Siberia.  Summer is typically clear, cool and breezy.

Yesterday Guoqing arrived in Krasnoyarsk from Bejing, completing our American field contingent.  We spent the day doing paperwork, finalizing plans, and trying to stay out of the smoke-filled air as much as possible.  Pasha and Sergei have been in Tura for the last several days, readying the equipment and making sure all supplies were in hand and in good working order.

While Slava Kharuk checks his shotgun at the security window of the Krasnoyarsk airport, Ross Nelson checks out the weight of his personal “baggage”.

Today we got up and went to the Krasnoyarsk airport, checked our luggage and readied ourselves for our flight.   Slava has a permit to bring a shotgun, for protection from wild animals.  Although it’s essential, that shotgun requires special handling and it must be given to security prior to boarding an airplane.  It takes a little while, but I’ll gladly sacrifice a little efficiency for safety in the field.

While Slava was making sure he could save us, should a bear want us for his lunch, Ross and I decided we should see just how much our carcasses might weigh.  We hopped on a nearby baggage scale.  I weigh more than Ross, but neither of us were happy with their personal poundage.  We now have a friendly challenge to see whose weight will change the most over this trip.   You could say we’re going on the Embenchime Expedition Diet.

Apparently, no one let Pasha and Sergi know the Americans were dieting.  They were waiting for us, with a wonderful meal prepared. We ate a beautiful and savory potato and meat stew, along with a very unique carrot and red bean salad.  Truly delicious. I guess the diet begins tomorrow.

I keep thinking of the huge amount of smoke we’ve witnessed. The amount of forests burning this year is sobering, especially following the historically massive fire year in 2010.  Even though fire is a normal part of forest succession in the boreal forest, the impression is that there are too many fires, too soon after the last outbreak.  It just is not typical.

In far northern Siberia, where we are heading this year, the fire return intervals are on the order of every 250 to 300 years or so. That interval has been well-studied, and we’re confident in that finding.  Fire is important to the larch forest ecosystem, but it is an uncommon event.

A line of upper atmospheric smoke passes across the face of the moon on the night of July 6. This photo was taken out of the window of the airplane en route from St. Petersburg to Krasnoyarsk. Smoke that reaches the upper atmosphere often travels long distances. This smoke has the potential reach North America within a few days.

It is ironic that we are here to study, among other things, the effect of warming on the fire return interval.  It is predicted that as temperatures rise, fires will become more frequent.  Temperatures have risen in this area over the last several decades,. We will be collecting samples to see if fire frequency has risen in our study area, far north of here.

In 2010, we came to Siberia by way of Beijing, because the forests around Moscow were burning.  That year, we worked an area north of Tomsk, near the Ob River.  We didn’t have fire there that year, but we did see some fairly fresh burn scars.  Now, two years later, our flights are again delayed by widespread blazes in taiga.  And our 2012 study area appears to be on fire – so soon.  Fortunately, the taiga surrounding the Embenchime is not currently on fire, so we don’t anticipate any danger.

It’s sobering to realize that in two years so close together that the taiga has suffered such extreme fires.  Is this result of climate change?  Or a freak occurrence?  What I know, for sure, is that these fires appear to be consuming a lot of forest.  They must be releasing a whole lot of carbon into the atmosphere – and what happens here does affect the rest of our world.  I believe we really do need to pay attention to the health of the boreal forests, for the sake of all the Earth.

This entry was posted on Monday, July 9th, 2012 at 12:15 pm and is filed under Siberia 2012 – Embenchime River Expedition. You can follow any responses to this entry through the RSS 2.0 feed. Both comments and pings are currently closed.