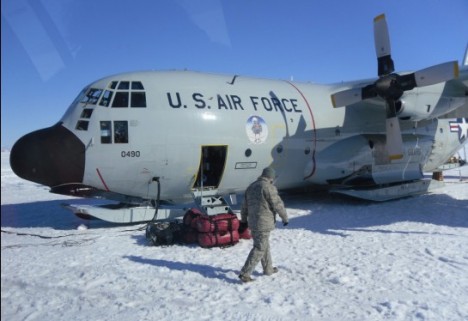 McMurdo (Antarctica), 31 December — That close. We were that close to leaving McMurdo yesterday; literally, a few feet from the airplane. The day started early, but with great promise. Everything was going so smoothly. Everyone showed up for breakfast dressed for the cold weather, our flight lunches were ready for pick-up, transportation was on time and we packed into the monstrous Delta vehicle (a small compartment atop huge tires, designed to span bumps and holes in the road) for the 50-minute drive to Pegasus, the skiway on the McMurdo ice shelf. The only ones ahead of us were the flight crew, the cargo handlers and a few ice runway work crew. This was the last day before the 2-day New Year weekend. We counted ourselves fortunate to be escaping McMurdo and getting to PIG so we could begin sorting our gear and be ready for Monday’s first move onto the ice shelf.

As we transferred from the bumpy Delta to the softer seats of the passenger transporter (used to take passengers from the rougher road traveled by the Delta onto the snow apron where the airplanes are), the pilot came over to say that there was a maintenance issue with the plane. It seems there are ten radios onboard and while all but one have backups, the one without the backup was the one that didn’t work. Maintenance was investigating. Just to cover themselves, the crew had also begun pre-flight checks on the only other airplane available. Usually a second airplane is not available, but PIG seemed to be the only spot on the continent scheduled to receive a flight that had good weather. It was a luxury and gave me more confidence that we were sure to get away. The race was not against the weather today, rather against time; the length of the mission would be over 11 hours and crews are not allowed to have their “duty day” (which starts when they first check weather reports) extend beyond 14 hours. So although it was still only 7:30 in the morning and the mission was set to launch at 0900, we could only delay two hours. If the mission couldn’t get off by 1100, we weren’t going. We waited in the very Spartan and deserted galley for further word.

Pre-flighting the second aircraft turned out to be a judicious move. The radio technician identified the problem, but the replacement part was in Christchurch. The scramble began to get our five pallets of cargo off the first airplane and on to the second. We were called from the galley back to the transporter and were driven to the second airplane, so we could get on quickly once the plane was ready. We waited, and waited, and waited, mentally assisting each forklift that grabbed a pallet from the first plane and lined up in order to deposit it on the tail ramp of the second aircraft. Done. Now what? We stared out the windows, trying to interpret the comings and goings of the ground crew. I’ve taken countless Herc flights in my many years here and I have yet to understand all that goes on inside these Hercs as the crew prepares them. Too much time gone already as 10 AM came and went. Doubt started to seep into our once-excited conversations. Finally, the pilot (a large piece of Air National Guard beefcake) came out and tossed the heavy survival bags (the big red ones in the picture) through the crew entrance door. I joked that he was going to load us the same way. Our mood returned to a spirited banter and we rapidly made sure that our bags were zipped up and everything was set. We expected to be called to board any moment.

That moment didn’t come, didn’t come and still didn’t come. 10:20 AM stretched to 10:30 and even 10:45. Opinions varied on the likelihood of success. At 10:55 AM, the pilot stepped off the airplane, strode across the few feet of packed snow to our vehicle and knocked on the door. When he addressed us, he didn’t mince words; we weren’t going, the mission was a “maintenance cancel”. He explained that the aircraft has two altimeters and that they are checked to be sure they agree to within 75 feet. These did not. Maintenance personnel had tried to determine why, but time had run out for the crew.

Everyone knew what this meant; we would have to wait until Monday for the next try and bad weather was forecast to move into the PIG area on Sunday. This was a crushing blow to our hopes. As far as our project timelines go, the scrubbed mission only translates into a single day delay if we can work through our cargo at PIG faster. Mentally, it just dials up the pressure yet further. It won’t be a relaxed weekend. We can’t accomplish anything here.

This entry was posted on Thursday, January 5th, 2012 at 12:48 pm and is filed under Pine Island Glacier 2011. You can follow any responses to this entry through the RSS 2.0 feed. Both comments and pings are currently closed.