Byrd Station (Antarctica), 12 December —The traverse team left yesterday and made it to Camp 1, 95 kilometers (59 miles) away. I spoke with Michelle last night; they had a few problems yesterday. One was that some bolts on the bottom of the radar sled came loose and the sled started to detach from one of the snowboards that serves as the sled runner. Ludo saw this early in the traverse (3 km, or 1.8 mi, out) and he and Clem fixed the sled with the spare parts kit. They used up all of the spare bolts to fix it. Last night, Michelle and Randy relayed the specifics of the bolts to me and I asked the Byrd mechanic, Paul, if he had any bolts to spare. He did. I added the bolts to the cache list.

The radar team had one additional problem. At some point, with all of the bumping of the sled, the GPS became unplugged. Without the GPS running we cannot tell where the radar data was taken. Ludo and Clem figured out that they had lost about 25 km (15.5 mi) of data. So they turned around, went back and recollected the data. They drove over 140 km (87 mi) yesterday! A huge day. Spirits were high and all was well at SEAT Camp 1 last night.

This morning I woke up at Byrd to patches of blue skies. The pilots told me that we would put in the caches if the weather was good enough for flying, so I jumped out of my sleeping bag ready to go. Also, if the weather held, I would catch a late night flight out of Byrd to McMurdo. I quickly packed my sleep kit and duffle so I would be ready to leave if a plane came. I went to the communications tent to talk with the pilots. At 7 AM they were already loading our 55-gallon drums of fuel in the DC-3 Bassler plane, so I knew we were going to try and put in the caches. 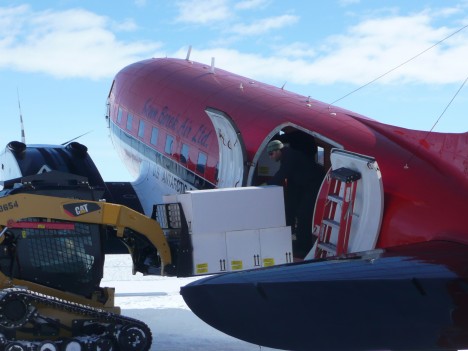 I made a quick stop in the galley on the way to the plane to see if they had any treats I could add to the caches. They gave me a loaf of bread and some home-baked chocolate chip cookies that I tucked into my backpack along with some Snickers bars, teas and letters for the team. 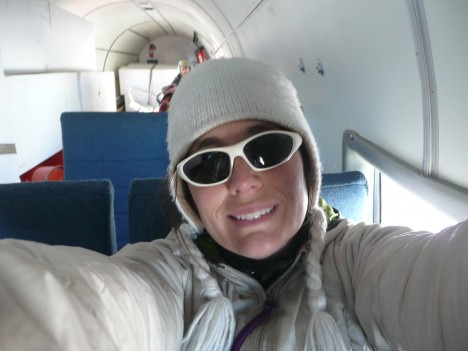 The Bassler took off just before 8 AM. At 8:15 we flew over the traverse team at SEAT Camp 1. I was up in the cockpit so I could see better. Everyone —Michelle, Jessica, Randy, Clem and Ludo— came out of the tents to wave at the plane and the copilot, who was flying the plane at the time, dipped a wing to wave hello. About 15 minutes later, the pilots started looking for a site to land and drop the first cache. The original GPS location did not have good surface definition so we landed about2 km (1.2 mi)  away from the planned camp site. I left the bolts, bread, a note and an ice core box for the team. 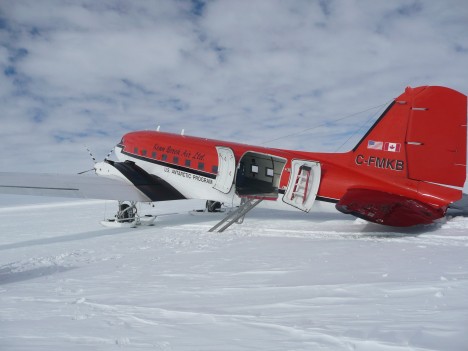 We continued to take off and land at each of the five cache sites. We were able to land exactly at the location of three of the five cache site and at two of the sites the team will have to snowmobile out to retrieve the caches. The caching went fast and took just over 2 hours. At each site, the team will get more premix and mogas, ice core boxes, and a surprise: At the first site, bread; at the second, cookies; at the third, crackers and stickers; at the forth Snickers bars and a Christmas card; and at the fifth, hot chocolate and tea. I told Michelle that I had left a letter at each site but they have no idea that they have gifts too. I hope they enjoy their surprises.

Along the route, I watched the surface carefully. I was looking for sastrugi (wind-blown snow dunes) that could slow the team’s progress, as well as for crevasses. We had already looked at the satellite imagery for crevasses, but it is always good to look with your own eyes. The surface conditions over the route were very smooth (though that could change with a big storm), and there were no crevasses. 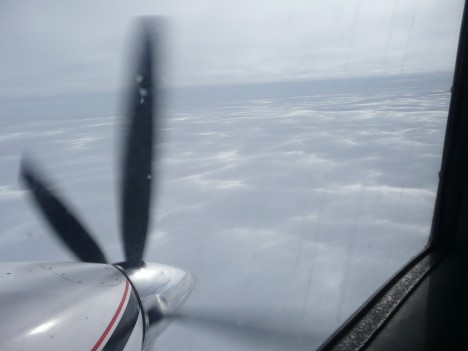 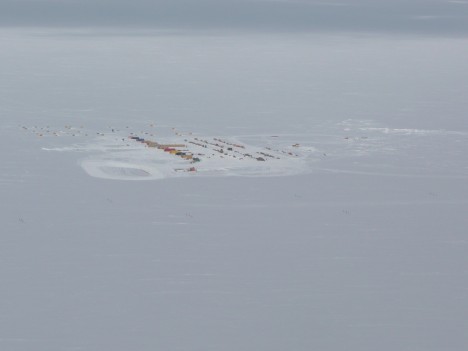 When we returned to Byrd, I needed to relay the cache positions to the team. I called Mac Ops (McMurdo Operations), where the team checks in everyday. Michelle knew to check-in in the evening to get the cache coordinates. I gave Mac Ops the cache locations and left a message for Michelle to call Byrd Camp for more information on the route conditions. Since I was expecting to get a flight out that afternoon I left detailed notes with the Byrd Camp manager, Kaija.

In the early afternoon, a fog bank came in over Byrd Camp and I knew I would not be leaving today. I spent the afternoon digging out fuel bladder to help contribute to camp choirs. There is always a lot of work to be done at field camps. At 9 PM I answered the call from Michelle to Byrd Camp. She was surprised to hear my voice. I told her about the route and she told me they had completed drilling the ice core at Camp 1. They plan on traveling to Camp 2 tomorrow. Great progress! The team is happy and excited to be making such good time. We are all happy that the caches are in so they can complete their work without worrying about getting good enough weather for a plane to fly. 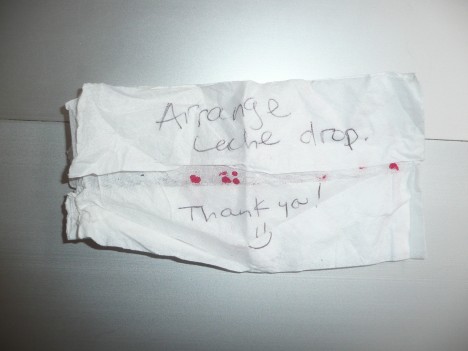 I am now just waiting for a plane to arrive so I can get home. I am over a week delayed getting back. The good thing is that the traverse team has made up time at both Byrd and Camp 1 and are almost back on schedule after the delays in McMurdo.

Other news from Byrd Camp is that the camp population was very small last night.  After the Bassler cached our supplies it took off to fly for Polenet, another science team at Byrd putting out seismometers and GPS stations. The Bassler could not return to Byrd due to fog that rolled in, and it had to divert to WAIS Divide camp, so about eight people are staying there for the night.

Here’s hoping for better weather tomorrow though the forecast does not look good.

This entry was posted on Tuesday, January 3rd, 2012 at 9:46 am and is filed under SEAT: Satellite Era Accumulation Traverse. You can follow any responses to this entry through the RSS 2.0 feed. Both comments and pings are currently closed.

One Response to “Fuel Cache and Camp 1”