McMurdo (Antarctica), 12 December — Well, nearly a week has whizzed by. We have been quite busy, but it doesn’t feel like there’s been much real progress. Every day seems to come with its own set of new problems and developments. This includes cargo hunting (yes, it was still going on until recently—but it’s DONE now), remembering some item or tool that would probably prove useful (then finding it and getting it) or thinking of some small thing to build and then getting the carpenters or machinists to understand what we want, (then waiting for the item, packing it and getting it into the cargo system.)

Tying up these loose ends didn’t add much weight to our overall cargo load, but we knew we were going to be heavier than we had planned for because there were some heavy items that failed to make it on flights to Byrd Station, where the over snow traverse was going to be taking them to the main camp at Pine Island. These problems originated way back in early September: Early season weather in West Antarctica was worse than usual, which meant fewer flights to Byrd and less of our cargo getting there when the traverse needed to start. Without sufficient cargo, the traverse managers held their departure back a few days. When they tried to start, one of the large tractors failed, leaving them with only three. This actually worked out better, since there was less cargo to pull. Now we hear that the traverse is encountering soft snow, slowing its progress even more. The image below is a map of the traverse’s progress through last night. It’s averaging less than 4.5 miles per hour and under 60 miles per day: At this rate, it will be another five days before it arrives at PIG. 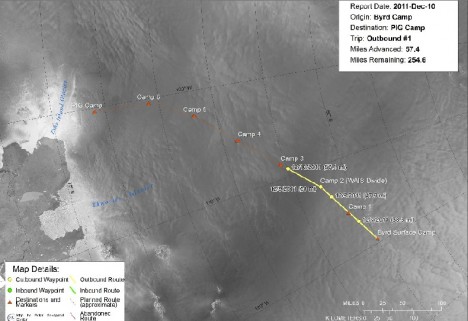 It’s a polar tortoise and hare race. The traverse is undoubtedly the tortoise, but the hare is having its own difficulties. Flights to PIG take “only” 5 hours (one-way) and were scheduled every day since Wednesday last week (except Sunday). Each one of them was cancelled because of bad weather at one or more of the required landing spots: McMurdo, Byrd or PIG. Good weather at Byrd is necessary to refuel the plane on its way home. Today’s weather looked the best of all days and, unlike last week’s flights, the plane actually took off from McMurdo. But two hours into the 5-hour flight, the weather went bad at Byrd. WAIS is another nearby station that could refuel the aircraft, but weather also went bad in there not long after. So the plane was ordered back to McMurdo before it was so far away and had so little fuel that it would get stuck somewhere out in the middle of West Antarctica.

It’s anybody’s guess who will get to PIG first: the traverse or the put-in flight. The traverse is more important, because it has the heavy equipment to dig out all the camp material left there at the end of last season (a small camp was set up then), groom the runway used last season (if the flags marking it can be found, that is) and tap into the all-important fuel bladder. Getting to that fuel is key because with it the LC-130 cargo planes (called “Hercules” or “Hercs”, for short) can get enough fuel to get back to McMurdo without having to stop at Byrd or WAIS. This will make missions to PIG less susceptible to weather cancellations.

Our cargo handling is done. But, as I mentioned, since now we have to fly some items that didn’t get to Byrd by the traverse’s departure, our stuff weighs more than planned. Whether that requires another flight will not be decided until we hear if the groomed runway at PIG can handle heavier landing weights. It’s all connected: cargo, tractors, fuel, airplanes and weather. Meanwhile, we will make our case for moving our necessary science cargo up in the queue, so we don’t suffer more delays.

It’s not all bad news. These past few days have contained some bright spots. Our project has received a lot of attention. A Blue Ribbon Panel, here last week to assess the effectiveness of the US Antarctic Program, really likes the social relevance of our mission and its interdisciplinary character. I gave a science lecture on PIG to a packed audience and got superb reviews. Many people here have touched the project in one way or another and I wanted them to understand what it was about and why we have to go to someplace that is so hard to get to. I also was singled out to prepare a poster and speak to the Prime Minister of Norway, who is flying to the South Pole to mark the 100th anniversary of Roald Amundsen’s trip.

Attention is great; more progress would be even better!

This entry was posted on Friday, December 16th, 2011 at 8:58 am and is filed under Pine Island Glacier 2011. You can follow any responses to this entry through the RSS 2.0 feed. Both comments and pings are currently closed.

One Response to “Slow Progress”